A Love Letter to Fandom: If They Could See What I See

Fandom has been talked about more and more recently. I’m pretty excited about that, obviously because it means I have a job, but despite the increase in visibility there is still a massive disconnect between the fandom the media presents and the fandom that I experience every day.

I know there are a lot of fans would be happy if everyone stopped looking at them, they just want to hide behind the imaginary fourth wall and continue on in secret. And there is part of me that wants to hide with them because people are looking at us, but they’re not really seeing. It would be easier if we just went back to the “don’t ask, don’t tell” attitude to fan practices: we won’t tell you about it, if you don’t ask about it. But at the same time I just really want everyone to see what I see, because what I see is something truly amazing.

Fandom comes across as frivolous. On the surface it does seem kind of silly to care that much about something that doesn’t directly affect our lives. I mean if a sports team loses, a band breaks up or a TV shows gets cancelled it’s not like it makes a significant impact on our day-to-day existence. But it does, because humans crave connections and community, what does it matter if we find these things through a mutual love for fictional couples?

And that’s what it’s about really: connections. Whether it’s connections with like-minded people or athletes or musicians or even fictional characters.  People coming together to love and appreciate culture and creativity is an example of humanity at it’s best but as soon as we slap the label “fandom” on it, it becomes something unhealthy.

The word fan is derived from ‘fanatic’, and it’s really hard to lose the stigma that being a fan is somehow a mental illness. (As someone that has battled mental illness for years, trust me when I say that fandom is the sanest part of my life.) Associating fandom with mental illness is just so incredibly upsetting because no only does it make fandom seem like something that needs to be cured it also makes serious medical conditions seem frivolous.

Honestly, it’s totally absurd that people are considered unhinged for being unashamedly enthusiastic about something. It’s really sad, actually, because it makes me wonder if the people that think this constantly have to self-censor their own enthusiasm. I find it hard to believe that they have never been excited about something. Or maybe it’s just that they think that what they’re enthusiastic about is worthy of excitement, unlike a silly TV show. Because who really cares that much about a TV show?

The answer is me. I care that much about a TV show because for some reason or another I felt a connection to the story and the characters and I wasn’t alone. A whole bunch of others connected to the same story, the same characters. Because of that TV show, I am now connected to thousands of people. People from different backgrounds. People from different countries. People with their own problems, their own desires, their own reasons for loving this TV show. Even if I never speak to these people, that connection is still there. I can be sitting alone in my room and I can find comfort in the fact that all over the world there are people that care just as much as me.

I’ve been in fandom for over 15 years. I’ve gone from hiding my involvement – treating it like a dirty little secret – to embracing it openly for the entire world to see. But it hasn’t changed my experience within fandom. I may have to deal with the confused or judgmental looks from family and friends, but fandom is still just about that connection. Fandom is still just a bunch of people coming together to love something.

I was never well known in fandom, I just kind of sat on the sidelines and watching. I’m not going to lie, I saw some truly horrendous things. Fandom is NOT a utopia. There are awful people everywhere and fandom is no exception. But overwhelmingly what I experienced was a thing of beauty.

If you knew how many people have told me personally that fandom saved their life, or got them through a tough time, or simply cheered them up while they were down, you would be blown away. And that’s not even counting the stories I have heard second hand. I have seen fandom raise money for medical operations, find a safe place to stay for someone in danger, and prevent countless suicides. I’ve seen people fall in love, and watched as two people that have never met embraced each other for the first time like long lost family.

Fandom has educated me on things I didn’t even know existed, and it’s the reason I finally got my degree. It introduced me to some of my best friends, and gave me something to live for when I thought I had nothing. Because of fandom, I had someone to talk to when I was alone on the other side of the world just because I overheard them mention one of my favorite books. 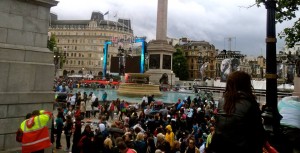 I camped out in the middle of Trafalgar Square, in the rain, for three days with hundreds of other people just to be there at the very end. Let me tell you, there is nothing quite like thousands of wet, hungry, tied, smelly people crying together because they are saying goodbye to something they love. I had never met any of these people before then, and I will probably never see most of them again, but they will always be part of my family, part of my life.

As are all the people that lined up all night for concert tickets or attended midnight premieres. My fellow fans, the ones that would laugh with me whenever anyone asked what was the point ? Non-fans didn’t understand. They think it’s strange that fans put so much effort into costumes, but those people have never been to a convention. They have never seen those fans get stopped and complimented, they never see them get asked for a photograph, they never see the thousands of people that appreciate the effort that went into that costume. They don’t understand that a costume is not just playing dress-up, it’s an expression of love and creatively.

Fan fiction has a bad reputation (it’s knot what you think) but the fact that fans churn out fantastic novel length stories constantly, for nothing more than sheer enjoyment, is beautiful. So many people have asked me what the point of fan fiction and fan art and all the other amazing fan projects is because it’s not like they get anything out of it. What they really mean is that they don’t get paid, and that’s so sad. Anyone that thinks the only reason to do something is money is seriously missing out.

The people that make the things we love might be all business but that’s not what fandom is about. Not to say that fans do not understand the realities of the situation. We know that that the things we love are sold for profit. In fact, we understand how this works better than most, we’re not the duped consumers they want to paint us as. Just because something is supposed to make money doesn’t mean it can’t have a deeper significance. Wedding rings are sold for profit but still ends up being pretty significant to the person that wears it.

The reason we attend midnight premieres, make elaborate costumes and write fan fiction is because we enjoy it and because other people enjoy it. It’s how we express our appreciation for something that we love and the people that love it with us. And it’s fun. (You’d think it would be boring to read about the same two people falling in love over and over again, but it’s really not – especially when it involves fake dating).

So where others see a group of weird people with strange priorities, I see a vibrant, creative, critical community born out of love. The community is far from perfect and it has its fair share of bad apples. A lot of the time the bad stuff drowns out the good stuff.

It’s pretty clear that the mainstream media (with a few exceptions) isn’t interested in writing about us being nice to each other – I guess nice doesn’t get hits – even if they do, they don’t understand us like we understand ourselves. This is why it’s so important that we tell our own stories. This is why we can’t just close our eyes and pretend the forth wall will protect us, even if it is easier.

It’s not fair that all the people that work hard to create the things that we love don’t get to see the wonderful community they have inspired. It’s not fair that we are judged by false or limited ideas of what fandom means. But it’s more than that, because I think we as fans sometimes lose track of the positive of fandom, we get overwhelmed by the negative things. While we need to tell our stories to outsiders to help them understand, we also need to tell them to ourselves so that we can always remember what makes fandom worth our time and effort.

I really want the world to see what I see, because what I see is truly magnificent.