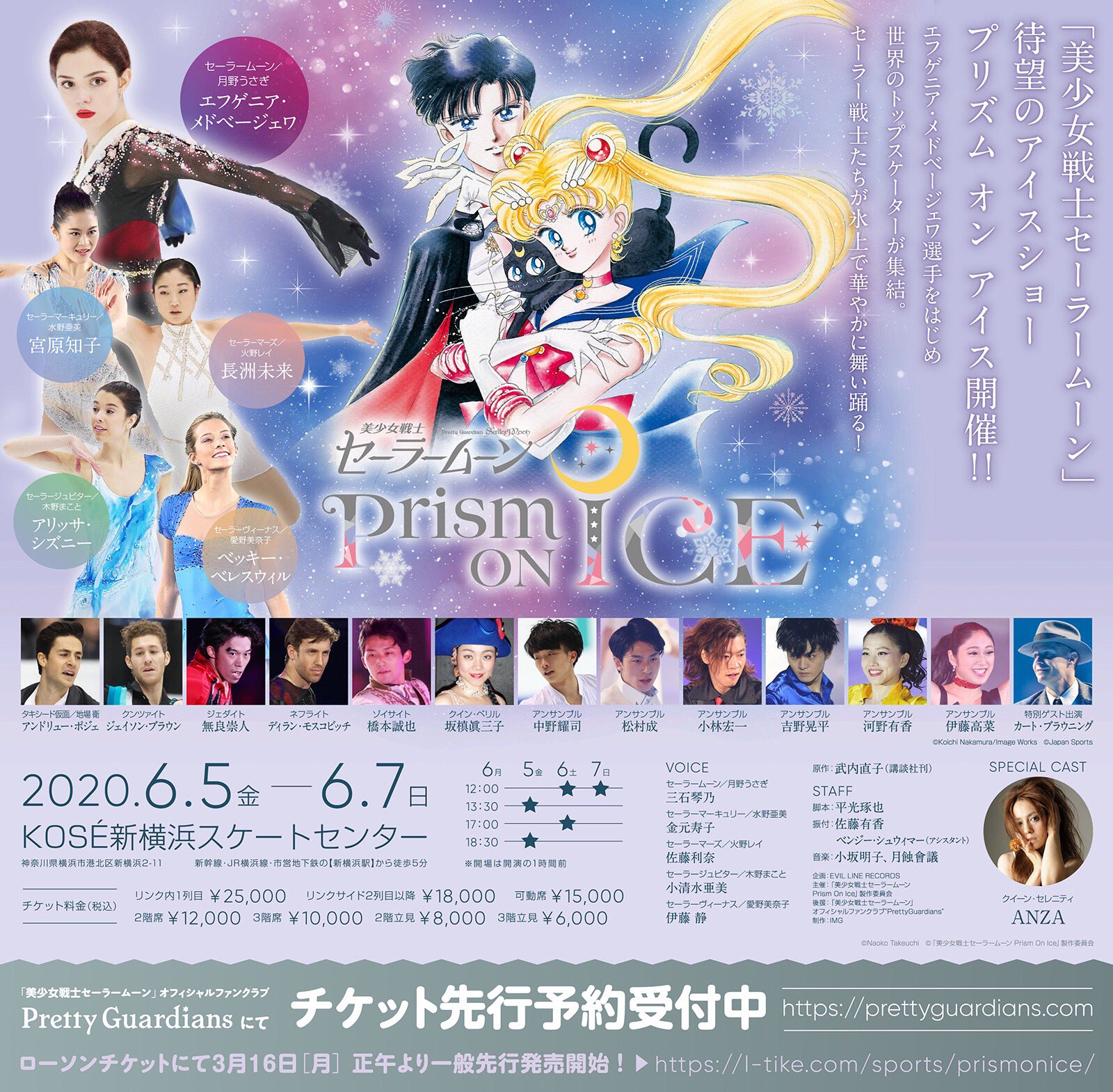 A Sailor Moon ice show is coming, and two time World Champion and Olympic Silver Medalist Evgenia Medvedeva is going to be Usagi!

A Sailor Moon ice show? Are you serious?

I’m already interested because I love figure skating and I love anime. So you got me there.  But now the cast list has dropped and my mind is blown.  The Sailor Moon ice show, officially called “Sailor Moon Prism On Ice,” has some serious figure skating star power behind it.

First and foremost, we have Evgenia Medvedeva who is already a big time anime fan, particularly when it comes to Sailor Moon.  When Yuri on Ice was airing, she would tweet her thoughts on it and occasionally discuss other anime shows.  She also brings a Luna plushie into the Kiss and Cry after every skate, which has sort of become a signature of hers.

She’s already thrown her love of anime on the ice once before when she did her Sailor Moon exhibition skate a few years back.  She’s done this before, albeit on a smaller scale.  Now she gets to play Usagi in an official production and I’m way waaaay excited for her.  Amazing.

“I want to express my gratitude to Dr. Naoko Takeuchi who produced the work. I want to practice a lot and work hard to become a sailor moon,” she said at the press conference. And trust me, Evgenia, you will become Sailor Moon.  We believe in you.

The Sailor Moon ice show is also set to star 2016 Four Continents champion Satoko Miyahara as Sailor Mercury. She’s a beautiful skater and is consistently one of the top ladies’ figure skaters in Japan.  The ladies’ field in Japan is already super thick with incredible talent and she’s been Japan’s senior National Champion four times.

As this production is happening in Japan, she’s no doubt going to be a major draw.  She has fans around the world so she’d pull in people no matter where this happened.  We love Satoko Miyahara.  Bless.

We’ll also have Mirai Nagasu as Sailor Mars, who is another powerhouse with a seriously impressive resume.  Mirai Nagasu is the first American woman to land a triple axel at the Olympics.  She was also part of the team that brought home the bronze medal from Pyeongchang 2018.

She made history at Pyeongchang and the US Figure Skating world is incredibly proud of her.

Rounding out the inner Sailor Senshi we have 2011 Grand Prix finale champion and two time US National Champion Alissa Czisny as Sailor Jupiter, and 2008 Junior Grand Prix final champion and seasoned ice show performer Becky Bereswill.  Though they aren’t as well known on the current scene as it’s been a few years since either of them were on the competitive circuit, they also have pretty stellar resumes.

The list of amazing figure skaters doesn’t stop there, however. Kunzite will be played by Jason Brown, who has so many amazing accomplishments to his name that I can’t even begin to list them.  Most recently he was the Four Continents silver medalist.  He’ll be heading into the World Champions next month as part of the United States World Team.

Of all the cast members besides Evgenia Medvedeva (because yes, I’m a fangirl for her and she’s the top of my list), he’s the one I’m most excited to see.  He’s beautifully artistic and full of expression.  I’m over the moon (no pun intended).

But there’s even more awesome casting!  Two time Grand Prix Final pair skating champion Andrew Poje will play Tuxedo Mask.  I really can’t wait to see Poje and Medvedeva play off each other and I look forward to what type of choreography he’ll bring to the performance with her as a pair skater.

And oh yeah, there will be a “special guest appearance” by four time World Champion Kurt Browning.  Because why the heck not?

Does this sound ridiculous? It should.  Because it is.  It also sounds like one of the most amazing intersections of my personal interests imaginable.

The show will run from June 5th to the 7th at the Shin-Yokohama Skate Center in Yokohama, Japan.  More information can be found on their official website.

5 thoughts on “A Sailor Moon Ice Show is Coming! And Evgenia Medvedeva is Usagi!”