Raise your hand if you feel personally attacked by how bad this season of American Horror Story is. “Neighbors from Hell” only solidifies Ryan Murphy’s inability to be subtle this season.

Only three episodes in and this season already feels worse than Freak Show did. This season treats not only the viewer like an idiot, but the main characters like idiots as well. This makes the episodes difficult and painful to watch, but not in a good creepy way.

The episode opens with a couple in therapy with Ally’s therapist, Dr. Rudy Vincent. These people are never given a name and are quickly shown being murdered by a bunch of clowns with the woman’s phobia, taphophobia (a fear of coffins). The mark left on the wall links this murder with the apparent murder-suicide of Mr. and Mrs. Chang.

From the opening, the frustration already begins. Viewers have known every reoccurring character besides Ally and Ivy are in on Kai’s plan. They have known that Mr. and Mrs. Chang were murdered and it was orchestrated by Kai. There is no subtlety in this season, and its lack creates no mystery or tension. Instead, the viewer is left screaming “DUH” at the screen in frustration when Ally figures something out from two episodes ago.

This means there are no surprises either. While Dr. Vincent has not been officially shown to be working with Kai, the foundation has been laid. The couple he was shown counseling, as well as Ally, have been targets of Kai and his gang of murderous clowns. This is supposed to instill the same paranoia that Ally is experiencing in the viewer, but instead simply leaves them frustrated as they watch the main characters get gaslighted, abused, and fumble through Kai’s very obvious (to the viewer) plan.

Now that Ally has blood on her hands from shooting Pedro, cue another attempt for Ryan Murphy to show how awful and self-cannibalizing the left is. Ally is labeled as the “lesbian George Zimmerman” in news coverage which is distasteful and downright incorrect. It’s belittling to the actual experience that people of color face at the hands of would-be racist vigilantes. Protests are shown in front of her and Ivy’s restaurant with Kai appearing (oh so conveniently) and saying he will handle the protestors.

Ally goes home only for Meadow and Harrison to show up in sombreros to harass Ally, calling her racist, and Harrison asking if she was going to shoot him because he was 10% Mexican. Thus, the title of the episode, “Neighbors from Hell”, is born. This entire scene is painful to watch, not because of them attacking Ally, but because like Ally, the characters are memes from yesteryear recycled and applied to a character. Everything that this show is trying to show and accomplish seems delayed and outdated, running off old memes and trying to pawn them off as somehow relatable characters. This is done to show how awful both sides are, but in reality makes every character besides Kai and Winter an outlandish joke. 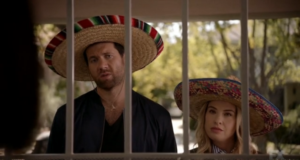 These two are insufferable., just like every other character this season.

After the encounter with Meadow and Harrison, Winter lets in a man who was there in response to a CraigsList sex ad. Instead of peacefully leaving, he then tries to sexually assault Ally and Ivy. This entire scene was painful to the point of unnecessary, further victimizing Ally and Ivy by adding a sexual element. Ally rightfully pegs the ads as the work of her neighbors and calls her therapist. Instead of showing legitimate concern, he is shown as just wanting Ally’s money in exchange for helping her by trying to cut off their time and scheduling an emergency appointment.

The couple comes home to see Oz playing with a guinea pig that Winter proclaims is from said neighbors from Hell, as a peace offering. This scene was frustrating for two reasons. One, the cage is way too small for a guinea pig which is an issue with people caring for small rodents already. Two, the following line when Oz says the guinea pig’s name is Mr. Guinea: “there are no cisnormative pet names in this house”. Excuse me? Can these characters become anymore of a Tumblr trope liberal at this point? Oz gets mad at Ally and tells her he wants her to go away as opposed to his new pet.

Cut to Meadow and Harrison’s house with a special guest, the cop! As if anyone didn’t see this one coming. The pushy cop who is constantly trying to put a racial agenda or justify a situation is in cahoots with Harrison and Meadow (which means Kai). Kai is shown doing the pinky trust thing with Meadow and physically striking her, showing that his control is not just mental, but also physical as well.

Kai is still the most believable character this season, but even in this scene that slips a little bit. After he strikes Meadow he tells her that he is doing all of this for her. The revolution is coming and she needs to get on board since he is working hard for her. This is typical manipulation; however, he begins to shift into obvious territory near the end of the scene. He starts telling Meadow she needs to put the blame on everyone else. She is never at fault for anything and that it is always going to be someone else’s fault so she should stop saying sorry.

Now Kai’s character has slipped into the obvious caricature of how people in the alt-right and other right-leaning ideas speak. It’s always someone else’s fault: the poor, the immigrants, the minorities, you name it and it is their fault, not the person’s own. This turns an otherwise powerful scene into a lukewarm and obvious swing towards this way of thinking.

This scene is contrasted by a happy family moment at Ally and Ivy’s restaurant. Ally, Ivy, and Oz are all happily having ice cream with Oz apologizing for what he said earlier to Ally in his anger over not being able to keep the guinea pig. Good news, though, Oz gets to keep the little guy! Which means, this will not end happily for poor Mr. Guinea because this season cannot get any more obvious. 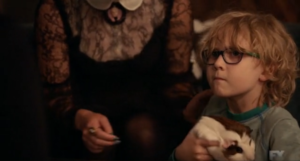 Don’t get too attached, Oz.

As if we were shot back to the mid-2000s, the happy family comes home to see the door painted with the clown symbol and Mr. Guinea’s cage door open. Oz turns to see the final moments of his new furry friend before he explodes in the microwave. That’s right, they used the microwaved pet complete with gruesome bloody explosion gimmick.

The obvious culprits are Meadow and Harrison so Ally storms over, punches Harrison, and threatens to kill them. Eyes are rolling at this point because guess what is going to come to bite Ally in the ass in about four minutes? Those threats. There is absolutely no subtlety in this season, instead everything is laid out before the audience in neon flashing lights and they are forced to watch as Ally bumbles through them blindly. It’s meant to be something other than the pure frustration it actually is.

As they leave, they notice the clown mark on the side of Meadow and Harrison’s house. They don’t tell the couple and return home in which later the cop shows up in response to the painted threat. He asks if Ally has been showing signs of psychosis recently and Ally gets upset over the insinuation, slapping a bag of dead guinea pig before him of evidence of Meadow and Harrison’s threat. Oz is soon heard loudly proclaiming “shit shit shit” from upstairs.

“I accidentally clicked a link,” the boy innocently proclaims before telling his mom’s that he turned off the parental controls cause he saw that the password was clownz. Why on Earth would Ivy make that that password when her wife has a severe phobia of them? Ivy opens the computer to see that the link Oz ‘accidentally’ clicked was a video of Ally being fingerblasted by Winter from episode two uploaded to a porn site. Instead of listening to her wife and wondering why she would upload a video like that to the internet and how her son happened to stumble upon that one video, Ivy yells at Ally for cheating on her and goes to take Oz to stay the night somewhere else.

Lights and sirens stop this plan and Ally and Ivy run over to see that Harrison is covered in blood, yelling at the cops about how Meadow is missing. Just then, at the most convenient time, Ally and Ivy show up allowing Harrison to accuse Ally of murdering Meadow. Raise your hand if you didn’t see that one coming! The episode title being “Neighbors from Hell” already was enough to show that Harrison and Meadow were going to be the major problem. The episode ends with Oz going missing for a second only for him them to see him in the house staring at the blood and the clown symbol painted in said blood on the wall.

So far, this season has been nothing but frustrating. The characters are outdated memes from 2015 which do not allow the viewers to connect with them. This means that they cannot feel for Ally as they watch everyone around her leave her and her fall right into Kai’s lap.

The predictability of the season is its greatest downfall. With each reveal of a character as Kai’s pawn, there is not a “oh shit” moment but more of a “well duh” moment that makes the buildup fall flat. The viewer is supposed to be experiencing Ally’s paranoia of those around her alongside her as opposed to viewing it as a frustrating dramatic irony experience. Without even somewhat relatable characters, it becomes difficult to feel sorry when the negative events happen to them. “Neighbors from Hell” only serves to drive this point home.

Previous:Hop in the Pro-Bending Arena with This Legend of Korra Kickstarter