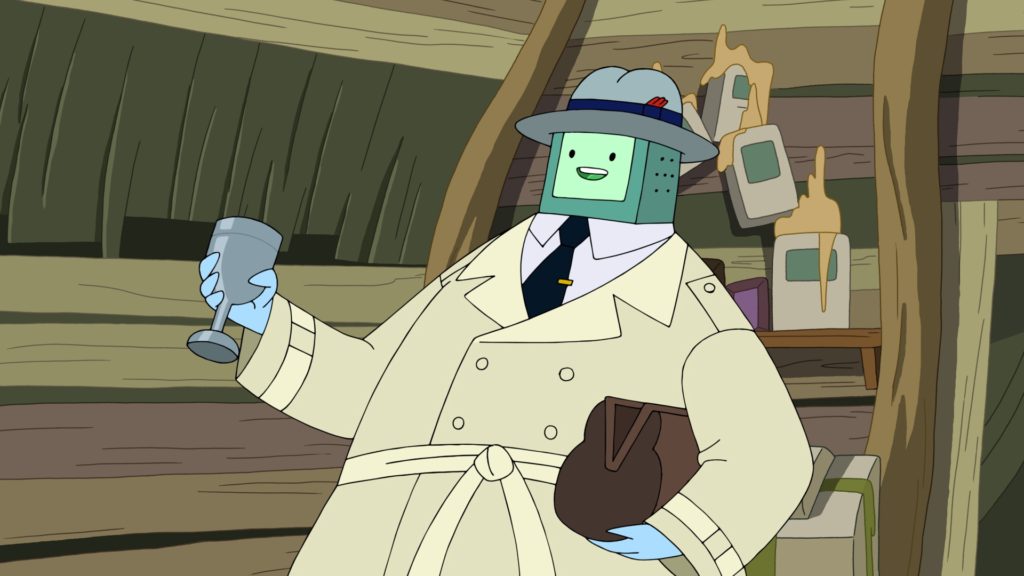 Only one thing counts in this life: get them to sign on the line which is dotted. A-B-C. A-Always, B-BMO, C-Closing. Always BMO closing. ALWAYS BMO CLOSING.

BMO is adorable, and they are at the height of their adorableness when they’re in full imaginative child mode, with Finn and Jake as proud parents. This cuteness is amplified when placed with the unusual pairing of Ice King. “Shield my eyes from the sun…because I think I see our next customer.”

When Finn notices BMO and IK’s antics in “Always BMO Closing,” he’s originally surprised and a little nervous… but Jake waves those worries off. It really highlights how far these characters have come from the original season, when any interaction between them would have been an immediate battle. But everyone understands the man who was once Simon is much better now, and Ice King himself has grown to become protective and caring of the people around him.

BMO and Ice King show off their profits to Finn and Jake, including a silver goblet which totally won’t be important later. When asked how they got the goblet, BMO says they sold a pouch of human baby teeth — Finn’s baby teeth. Finn understandably gets upset — those baby teeth were the only thing he had left from the time when he was a little kid, and now some evil-sorcerer-slash-mad-scientist has turned those teeth against him. There’s something symbolic about Finn having to fight and poof the Baby Teeth Finns, especially after an episode like “The Wild Hunt” which explores how his most recent trauma has been affecting him — a trauma which also involves killing a version of himself.

(Crunchy is missing, according to a poster which briefly shows up in “Always BMO Closing”…another detail I’m sure will be totally irrelevant to the rest of the season.)

“Always BMO Closing” is an episode named after a reference to a movie made long before any of the target audience was born (Glengarry Glen Ross), stars a BMO n’ Ice King “Two Kids in a Trench Coat” routine, and includes Jake’s cheerful line: “These baby-smashing hammers are great!” Even after nine seasons, Adventure Time still occupies the best bizarre/hilarious/silly spot in cartoon television.