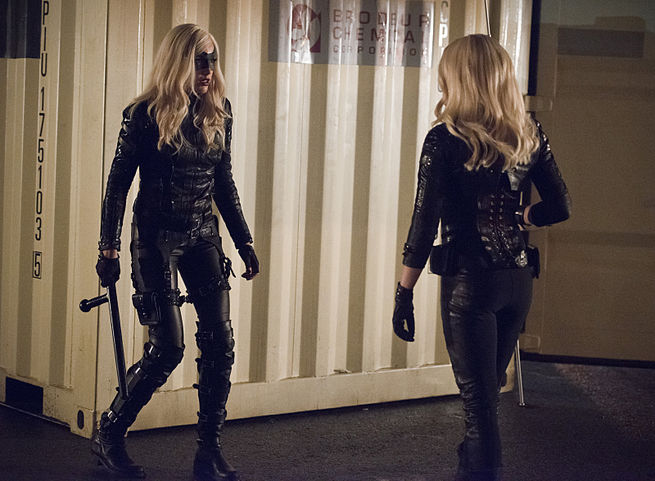 The first thing I thought when Arrow opened with a scene of Laurel fighting her sister Sara – both of them dressed as Black Canary – was that the show had done itself a disservice by airing previews that included the information that Vertigo was back on the scene in Starling City. Of course we all know that Sara is dead regardless, but I think it would have been more interesting for them to start “Canaries” the way they did without having told us about Vertigo’s return. And yes, I realize that I’m talking about Vertigo like it’s a person, but the drug was the real villain in this episode, much more so than Werner Zetle, the man who was using it. 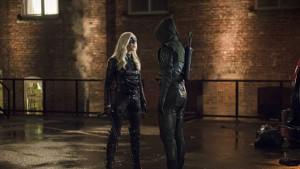 Unfortunately that wasn’t the only thing about this episode that left me wondering what’s going on and why the writers are making these decisions. Some of it was simply annoying – for example, the back-and-forth between Oliver and the rest of Team Arrow about the changes made while he was gone, as well as him constantly harping on Laurel and telling her he didn’t want her involved, took up far too much screen time.

As for Oliver and Thea, despite the fact that I’ve wanted her to know about Ollie being the Green Arrow, now that it’s happened I’m not sure how I feel about it. I think that it all just seemed to happen too fast – she’s been in the dark for so long, and she was so angry about the lies she was told in the past, yet she learns this huge truth and immediately forgives Ollie because of how much good the Arrow has done? I’m just not sure I buy that…but if it really is the case, then it’s just bad writing for her character, past and present.

Meanwhile Laurel is becoming more and more likable with every episode. Does it have something to do with her putting on that Black Canary suit? Sure it does. But to be honest, she’s actually really crappy at being the Canary (for obvious reasons – she still hasn’t had training like Sara did), so it’s not about her just bursting onto the scene as some amazing heroine. I wasn’t a big fan of Laurel in the beginning, though I did enjoy the depth they gave her character as time went on. That said, I’m glad Oliver finally relented and stopped telling her she couldn’t help out, and I’m even more happy that Laurel finally told Captain Lance about Sara…though as with Thea finding out about Oliver, I almost feel like this “big reveal” was somewhat anticlimactic. 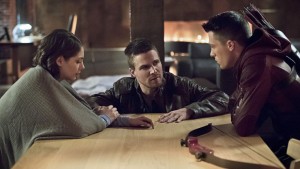 I suppose that “anticlimactic” is just the word for this episode, because the situation with DJ Spy also came to a head in a pretty boring way. Was it really necessary for him to finally attempt to kill Thea only after she’d slept with him? Ugh. Just, ugh. And don’t even get me started about the fact that she needed help from Roy and Merlyn to fend him off. But hey, all of this led to Merlyn convincing Oliver to go back to Lian Yu – and to take Thea with him. So that will maybe lead to some interesting developments…though I’m wary of this situation as a whole, so we shall see!

Speaking of Lian Yu and the fact that the flashbacks have sucked since Oliver left the island, I’m also torn about Amanda Waller taking him back to Starling City in the flashbacks. Are the flashbacks about to meet up with the timeline from Arrow season one, just as Oliver has returned to Lian Yu in the current timeline? And can the show really make that work for them? Hopefully things will be a bit clearer after next week’s episode.

One last note, though: I’ve been a bit torn about Felicity’s recent character development lately, but in “Canaries,” she was nothing short of amazing. First standing up to Oliver, then having a really awesome gal moment with Laurel…more of that, please, amiright?