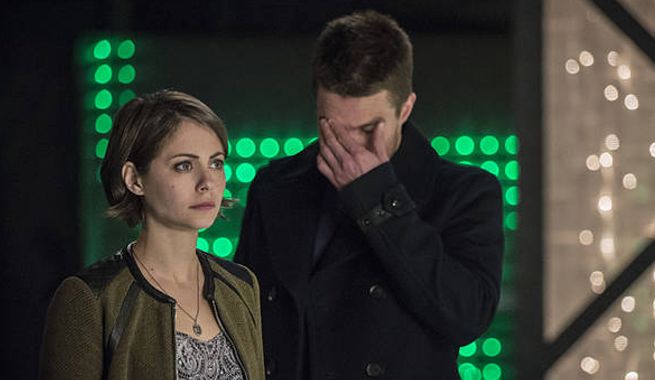 It’s no secret that I haven’t really enjoyed the past several episodes of Arrow, and after watching “Broken Arrow” I’m honestly not even sure what to think.

It seems to me that the main issue is that Oliver has, for all intents and purposes, become too good – the only one who can beat him, is himself. Combine that with the fact that they’ve dragged out this Ra’s al Ghul plot for far too long (at least in my opinion), and I’m left feeling that the writers simply don’t know where to go anymore…which is probably why they threw in a metahuman this week. 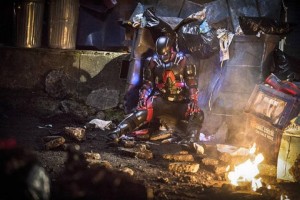 Unfortunately the inclusion of “Deathbolt” didn’t seem like much more than an afterthought, something thrown in to distract us a bit as we watched the real struggle between Oliver and Captain Lance and wondered what was going to happen to Roy. On the other hand, Ray once again stepping out as the Atom was a big part of the episode, but this felt more like a setup for his own show than anything else. Meaning, I certainly don’t expect him to officially join Team Arrow…but that begs the question, what will happen with Felicity if he goes off on his own?

Of course that’s not something I personally want to think about. I really enjoy Brandon Routh as Ray Palmer, but I feel like an Atom-centric show wouldn’t have that dark vibe that I love about Arrow…and admittedly, I also prefer the tension between Felicity and Oliver to her relationship with Ray – especially now that Ray took back his “I love you”. Seriously dude, I know she didn’t say it back, but you just don’t do that!

Speaking of things that shouldn’t happen, while I understand what the show is trying to do with the Hong Kong flashbacks – pair them with the episode theme, that is, and in this case that was the idea that Oliver needs to learn to accept help from others – it’s so heavy-handed these days that I wish they would just do away with the flashbacks altogether. 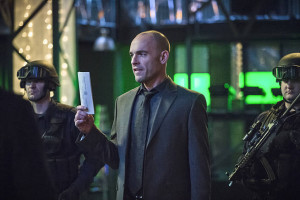 From bad to good, though – while I didn’t care for everything about Roy’s story line in this episode (the fact that he keeps bringing up the cop that he killed while on Mirakuru, and keeps insisting that he needs to be ‘punished’ for what he did, is getting a bit old), it definitely turned out better than I expected. From him kicking ass when he was attacked by the inmates to him being [supposedly] fatally stabbed by a “guard”, I was on the edge of my seat and certainly shocked over his “death”. Though with the way Captain Lance was acting throughout the whole episode, I actually thought that perhaps he was lying to Thea and Oliver about Roy dying, and was once again [pleasantly] surprised when it was revealed that Roy wasn’t dead and that he, Felicity, and Diggle had in fact planned the whole thing. The fact that he is apparently leaving Starling City for good is certainly not the outcome I would have hoped for or wanted, but I definitely prefer it to the character being killed off in such a manner.

Unfortunately, it appears that Thea may never know the truth about Roy being alive, as Ra’s al Ghul stabbed her with a sword and left her for dead.. I hate to say it, but it’s about time Ra’s went after Oliver’s loved ones. I almost wish the fight scene had been a bit longer, because it was a good one, but at the same time I think Thea held her own against Ra’s just as much as she could and should have. Of course, Oliver was “brought back from the dead”, and it seems from the preview for next week’s episode that they’ll be attempting something similar with Thea…but that doesn’t mean that she’ll be the same, or that Oliver and the rest of Team Arrow won’t be seriously shaken by her death (I hope, anyway, because I’ve really grown to like Thea this season). With four episodes left this season, I can only hope that they’ve moved on from the dragging plot lines of the past few episodes, and that they can keep up the slightly better pace we saw in “Broken Arrow”.

Previous:Supernatural 10×18 Review: “Book of the Damned”