Attack on Titan: The Show I Didn’t Want To Like 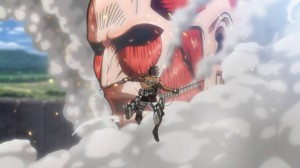 I’ve been watching anime of all genres for years, but I’ve rarely had as hard a time getting into a show as I have with Attack on Titan (or Shingeki no Kyojin in Japanese). It came to my attention a few weeks ago thanks to Tumblr and after much resistance, I finally caved and started watching.

Based on the manga of the same name, Attack on Titan centers on a group of three friends, Eren, Mikasa, and Armin, in the midst of what could very well be humanity’s final days. The world has been besieged by a race of enormous humanoid beings, the Titans, whose sole purpose seems to be to kill humans. The Titans range in size from about three meters to fifty meters tall, but they share commonalities. They’re nearly impossible to kill, regenerating lost limbs in a manner of minutes, and they will devour any human who is unfortunate enough to fall into their grasp. Humanity has been driven almost to extinction by the Titans, and has built a series of enormous walls to protect itself from their onslaught. This is the world that Eren, Mikasa, and Armin have always known. It’s the world that inspires them to join the military, to which Eren in particular is devoted.

I won’t lie. I hated this show for the first few episodes. The only thing that kept me watching was Hulu’s autoplay feature and my need for background noise while I worked. But somewhere around episode five or six I realized I had started enjoying Attack on Titan. The visuals are frequently stunning, the action sequences have an acrobatic Spiderman quality to them, and the main characters are easy to root for. Eren is strangely endearing despite his reckless single-mindedness. I want to see him succeed. I want to see them all succeed. And I admit, I’m very curious about how they’ll finally defeat the Titans. At least I hope they’ll defeat them in the end. I’ll be really pissed off if they don’t. 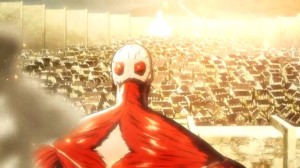 Attack on Titan is not without its drawbacks. The story is almost impossibly bleak, which can be a turn off for some. It kills characters off just when you’ve started to like them and it doesn’t apologize for it. In some cases it barely even acknowledges their deaths. But in the midst of all the misery there are touches of humor to keep you going. Attack on Titan also has an intense love of internal monologue, pep talks, and battles that go on for Dragonball Z lengths of time (that means they’re really long, like multiple episodes long). But despite the drawbacks I’ll be sticking around until Eren and Co. finally win back their world. I just hope that a few of my favorite characters will be there at the end.

So if you don’t mind a bit of monologuing and a LOT of your favorite characters meeting gruesome deaths, I encourage you to give Attack on Titan a try. You may regret it when the show tears your heart out but, if you’re anything like me, you’ll keep watching regardless.