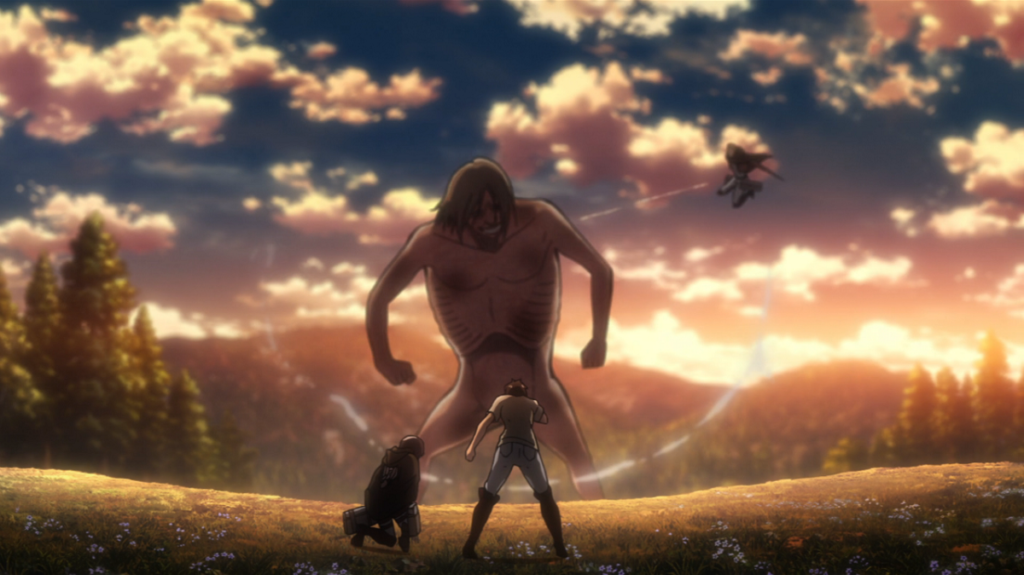 Attack on Titan season 2 comes to an end with “Scream”, an aptly-titled episode because there was definitely a lot of yelling going on. There was also a lot of tears, a lot of death, and a lot of setting up for season 3 (coming in 2018!).

“Scream” puts us back into the middle of a massive battle. Faced with the Titan that ate his mother, Eren is once again helpless, this time because he cannot shift into his Titan form and exact the revenge he craves so badly. Mikasa is injured and cannot fight. So Hannes comes to the rescue, eager for a little revenge of his own. He puts up a good fight, but sadly, he is eaten, and Eren and Mikasa can only watch in horror. Eren then breaks down, screaming that he is just as useless as he was five years ago. (Terrific voice acting here; Eren yells a lot but Yuki Kaji was on a whole new level in this scene.) Mikasa tearfully convinces him that he isn’t useless and for a moment it looks like they will kiss – in the middle of a Titan fight, no less – when Eren stands, heals his hands in seconds, and punches the Smiling Titan.

Surprise! Eren has the power to command and control Titans. That’s what Reiner meant when he was talking about the “coordinate”. No wonder he and Bertolt wanted him so badly. Eren uses his newfound power to immediately get his revenge on the Smiling Titan, making all of the other Titans attack and eat it. Reiner and Bertolt – and Ymir to a lesser extent – also are affected by Eren’s new abilities and forced to retreat. Ymir goes to help them, and the three end up on the wall, still alive.

I was very impressed with the animation sequences in “Scream”, particularly Christa/Historia with her 3DMG and the way everything went quiet and light during Mikasa’s confession. I’m so proud of all the members of the 104th; they’ve really grown this season and I’m eager for even more character development next season!

Hange and Connie visit Erwin as he’s recuperating and share the theory they’ve come to about the Titan incursion; namely, that the residents of Connie’s village somehow managed to turn into Titans. I waited almost the entire season for Connie’s reaction to this news, but now that it’s happened I kind of hate myself for wanting it. Poor boy looked absolutely broken, clutching his parents’ photo. Levi is distraught that he’s spent years running around killing people and confused as to why Erwin is smiling about this news. Erwin is merely excited that they’re getting closer to the truth, but Levi seems more concerned that the truth won’t be worth the loss of life.

The episode ends with a shot of Beast Titan on the wall, along with a blond man. Could he be the man who shifts into Beast Titan?

What is waiting for Reiner, Bertolt, and Ymir beyond the wall? What caused the residents of Connie’s village to turn into Titans? What the hell is in Eren’s basement? More importantly, is Jamie going to have to start reading the manga? (All signs point to yes.)

What did you guys think of “Scream”? What are your theories for next season?

Previous:Attack on Titan Season 3 Announced for 2018!