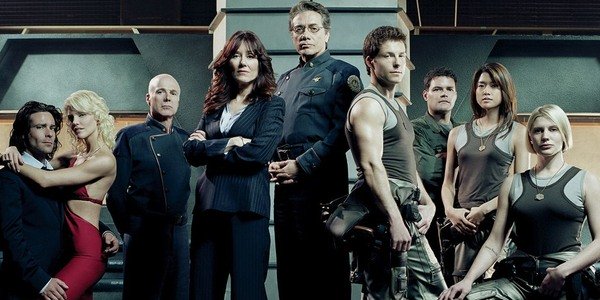 Nerds rejoice! Battlestar Galactica, one of the best science fiction shows of our time, is now streaming on Syfy.com for free!

If you’re a fan of science fiction and haven’t had a chance to watch Battlestar Galactica, you should fix this oversight immediately!  It’s truly an incredible series with a dynamic set of characters, absolutely killer score by Bear McCreary, and an interesting premise that triggers one of the better sci-fi narratives I’ve ever encountered.

The ending of the series was rather divisive, but a lot of us enjoyed it despite its flaws.  I continue to rewatch it frequently many years later and consider it one of my go-to shows when I have nothing new to take up my attention.  Whether or not you enjoy it as much as I did is something you’ll just have to find out by experiencing the journey yourself because while there’s a lot of criticism, there’s also a lot of love for it.

The Premise of Battlestar Galactica

If you’ve already seen Battlestar Galactica, you can skip right on by this section.  But if you’re new to it, let me introduce you to the premise of this wonderful show.

The following is a summary from Syfy:

After a 40-year armistice in the war between the Twelve Colonies and the Cylons, the latter group launches a surprise attack with a goal of exterminating the human race, wiping out virtually everyone in the Twelve Colonies. Malware placed in the Colonial military’s computer network renders most of the network ineffective or destroyed — except for Battlestar Galactica, a space battleship that fought in the earlier war. Because it’s older computer systems are not networked, the ship is not affected by the malware attack and it becomes the lead in the new battle with the Cylons.

It’s a lot, man.  And the set up barely scratches the surface of what’s actually in store as you watch the story unfold over the numerous seasons and films.  It touches on many heavy themes ranging from discrimination, the plight of refugees, love, family, death, war, destiny, and even spirituality.  All of this is interwoven into a hard science fiction narrative.

It’s simply amazing.  I’d go as far as saying it’s required viewing for anyone interested in the genre, especially if you like your sci-fi with a heavy dose of drama. 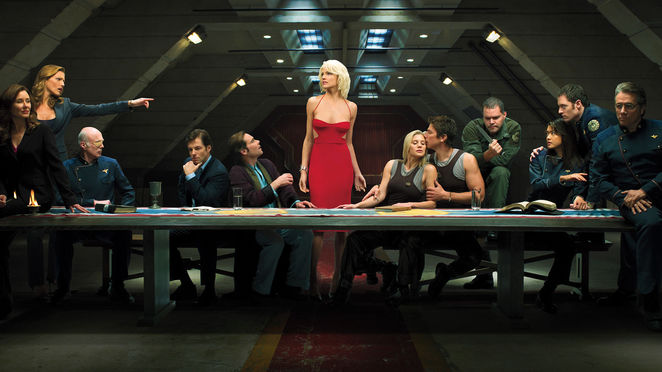 Now that you know what it’s about, you must be wondering why the heck I’m so excited for a show with a clearly apocalyptic narrative while we are going through our own little mini apocalypse in real life.  Doesn’t make much sense, does it?  But somehow… it works.  I’ve found that watching apocalyptic fiction has been oddly therapeutic and comforting right now, as my Westworld reviews indicate every week.  Somehow this helps.

Buzzfeed actually spoke to a psychologist, Doctor Christina Scott, about this very topic and this is what she had to say:

There are two reasons I personally would think we would be looking at movies like Contagion [a film about a fast spreading lethal virus] right now. One of them is that it almost gives us a sense that reality isn’t that bad. It could be a lot worse, because look what a disaster is going on in this particular movie. And I think the other part of it is, unfortunately, there’s a sense of almost doomsday prepping. People might think in case real life gets worse, this is the only reference point we have — because we don’t have any reference of this ever happening in recent times, in our lifetimes.

The apocalypse in Battlestar Galactica is a robot war, basically, so it’s not a direct comparison with the examples discussed in the Buzzfeed article, but the reasoning for why this is the perfect show to watch right now still tracks.  I’ll be interested in viewing the series through a new lens now that I’m living through these ‘interesting’ times, seeing if I perhaps view any details differently than I did before or if anything hits different.

More Battlestar Galactica Is On The Way!

There’s even more Battlestar Galactica coming our way very soon!  At first it sounded like a reboot, which would have been weird considering the show ended just a little over a decade ago.  But then we learned it’s going to be a separate story that takes place in the BSG universe (and I had some ideas about what I want to see out of that, too).  It sounds like an expanded universe type of story, which should totally work.  I admit I was hesitant about the idea of doing a reboot, but that’s not going to be what this is.

I haven’t heard much about the newer series lately and don’t even know what part of pre-production they are on at this time.  If it’s in the earlier stages, it’s possible that our current Hollywood slowdown due to the lockdown might not effect it too much, but I wouldn’t be surprised if it gets pushed back a bit.

Either way, we are keeping our ear to the ground about this and as soon as we hear more, we’ll write about it.

In What Order Should You Watch Battlestar Galactica?

Please start with the BSG Miniseries.  Once that’s complete, you can move on to the four main seasons of the show starting with the episode titled ’33.’   There are also the films Razor, which they’ve placed at the end of season 3, and The Plan, which they put at the very end.  Chronologically this is not where these films fit, but it’s how a lot of us experienced it so it’s not exactly a bad order.

Syfy doesn’t list them in the most intuitive way, so please make sure you are watching it correctly.  The first episodes that pop up when you load the page at the final episodes of the show, so please don’t start there!

Also be warned that Syfy, bless them, are offering this to us FOR FREE so you’re going to have to deal with ads.  I promise you it’ll be worth it.  Just go watch.

So say we all.