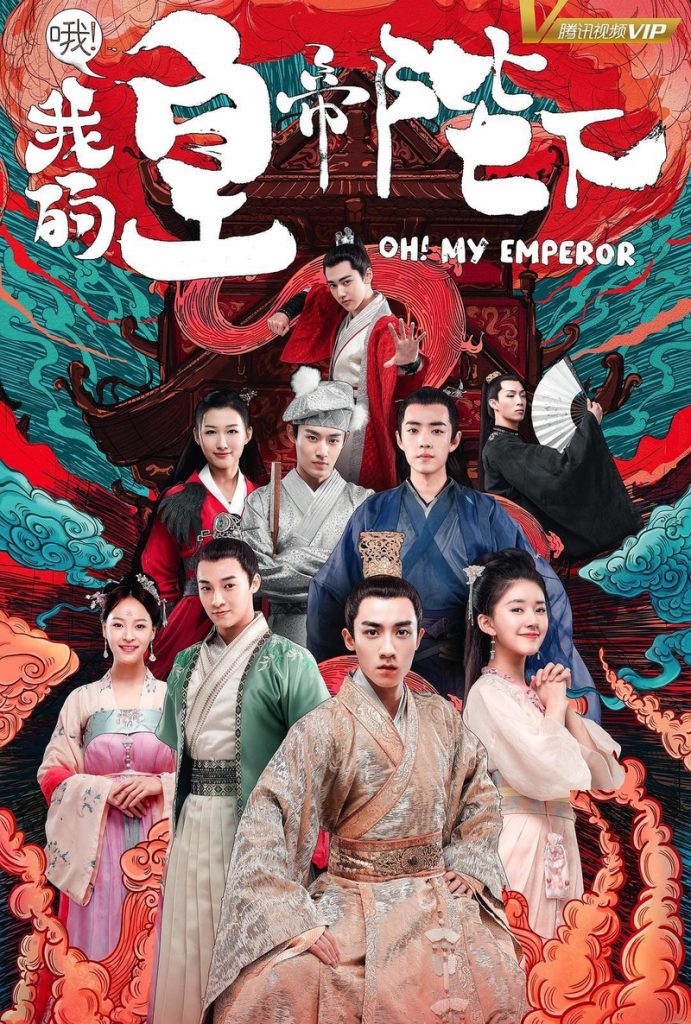 As some of you may know, I’ve recently become extremely obsessed with The Untamed, the live-action adaptation of the BL novel Mo Dao Zu Shi by Mo Xiang Tong Xiu. I am now, how do you say, rather enamored of the two leads – Xiao Zhan and Wang Yibo – and so started looking up some of their other projects. And so I discovered Oh! My Emperor, starring Xiao Zhan, and thus succumbed to the ridiculousness that is this supernatural, time travel, love quadrangle show.

The basic premise behind Oh! My Emperor is that a medical intern named Luo Feifei patches up her favorite idol in the emergency room and then gets invited to his concert. On the way to the concert, a series of mishaps lead to her stealing a bike and getting in an accident, all during a meteor shower. Apparently, this meteor shower, combined with her bike accident, is enough of a cosmic event to send her back in time to a kingdom ruled by the Twelve Zodiacs and Emperor Beitang Yi. The emperor bears a striking resemblance to her favorite idol, and that’s who she thinks he is, at first.

Each of the Zodiac members possesses some special ability, and while that sounds really interesting, I actually think they didn’t utilize this aspect nearly enough. For example, one of the guys has super speed, and yet he gets captured way more times than someone with super speed should. And the guy that can talk to animals did not talk to nearly enough animals. If I could talk to animals, I would be talking to them all the time.

Anyway, Xiao Zhan plays the emperor’s uncle, Beitang Moran. At the beginning of the series, they’re at odds. Moran controls the military and isn’t yet willing to concede control to Yi, and for a while, I thought Moran was going to be the main antagonist. By the end of the first season, though, you start understanding Moran’s actions. I liked his character the most, and I’d like to think it’s not just because of the actor. He was just so cool, all suave and confident. And he gets a couple of slow-motion entrances, and he plays the guqin, and he has a crying in the rain scene, and it’s just…really, really nice. Super awesome wardrobe, too.

Also, something like half the cast are members of X NINE, Xiao Zhan’s idol group.

For as much as I started watching Oh! My Emperor for shallow reasons, I actually ended up enjoying it. (I wouldn’t have finished the series otherwise! Like, I love Tyler Hoechlin but I can only stomach so much 7th Heaven, even for him.) It’s got a pretty interesting story, and there are a lot of good messages in it, like being yourself and giving people a chance, and stuff like that. It’s very entertaining, with some halfway decent action scenes – even if they do seriously underutilize the whole superpowers thing.

Anyway, for a show that’s classified as a drama, I didn’t think it was all that dramatic. There is some pretty heavy stuff in it – a rival kingdom is trying to take over the Zodiac kingdom by poisoning the thirteenth tribe (Ophiuchus) and turning them into “maniacs” that attack without provocation. And there is a massive shift in tone in the last few episodes of the series; my jaw literally dropped when I realized what was happening. 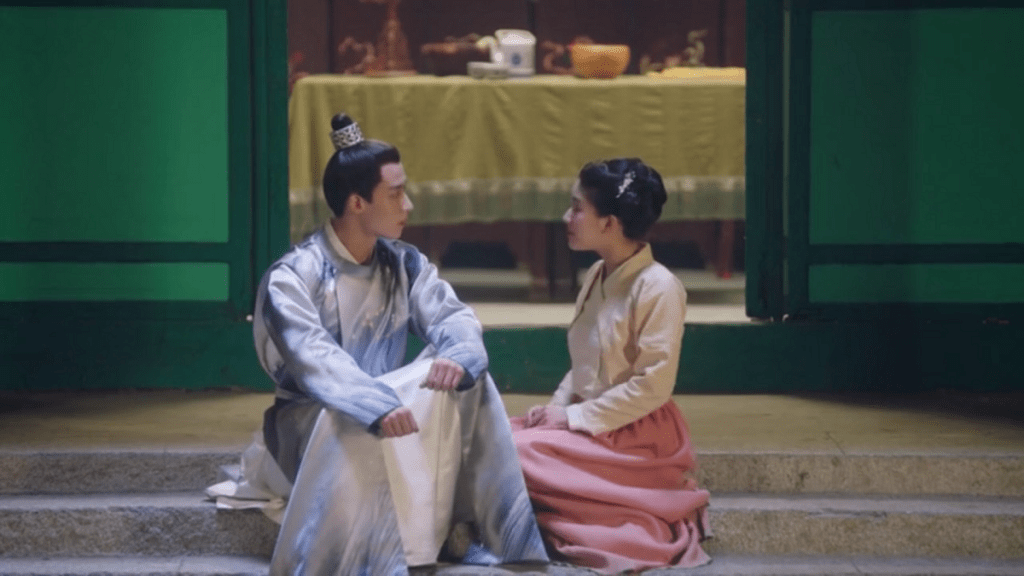 But it’s also, as previously mentioned, kind of ridiculous. There are a lot of silly sound effects and more graphics that look like Snapchat filters than any sort of serious drama should contain. Feifei can get kind of annoying, and I tend to dislike love triangles (or in this case, quadrangles) on principle because they’re often handled poorly. But I didn’t mind this one because everyone was very respectful and it didn’t involve anyone cheating on anyone else.

Which brings me to one thing I really liked about Oh! My Emperor (aside from Xiao Zhan), and that was the friendship between Feifei and YuRan (and to a lesser extent Shengnan). YuRan is betrothed to Yi but in love with Moran. Moran is in love with Feifei, who is in love with Yi. On two separate occasions, Feifei catches YuRan (whose power is invisibility) spying on Moran in the bath, but YuRan disappears and it’s Feifei who gets caught. This leads to Moran believing that Feifei returns his feelings, and he goes to kiss her. YuRan spots this and runs away, and I immediately rolled my eyes because I thought I knew what was coming.

I was pleasantly surprised, however, that YuRan did not blame Feifei and end their friendship. It happens way too often in media that women end up fighting each other over things that aren’t their fault. In this case, it isn’t anyone’s fault because people are ignorant of how others are feeling. There is a legitimate conversation about what happened and what is going on, and I was genuinely shocked it didn’t devolve into pointless, petty drama.

Feifei and YuRan’s friendship is pretty great, with the two of them resolving to help each other win the hearts of their various crushes (including a rather humorous scene where the girls stumble and fall into the wrong man’s arms, so Feifei switches them). There is more than one instance of the ladies risking their own safety to save the other.

As for the romances, well, they weren’t terrible. I know that’s not a ringing endorsement, but Feifei and Li’s relationship is full of some tropes of which I’m not a fan (they’re not bad or toxic, per se, I just dislike them), and honestly I could not understand why she went so hard after Yi and ignored Moran. (No, seriously, Yi tried to have her executed at least twice and Moran was super nice to her and saved her life. I may be slightly biased.) They did have some cute moments, though.

The other main romance is between Shengnan and Wuchen, who were betrothed as children, but now that their fathers are dead, Shengnan no longer wants to proceed with the marriage. Wuchen is an awkward turtle as he tries to convince her they should still get married, and both of them are rather adorable about it.

Basically, Oh! My Emperor was a lot of fun, full of pretty people and gorgeous costumes. It was a great way to escape for a while.

Oh! My Emperor can be found on Amazon Prime Video (in the US). 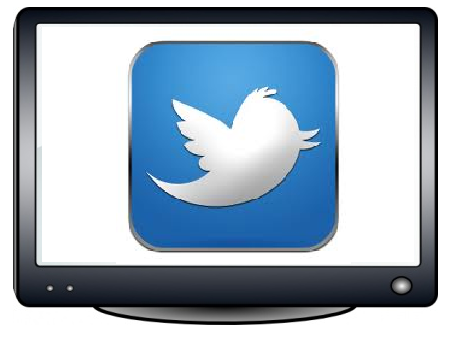 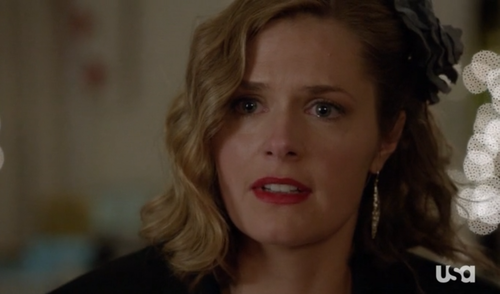