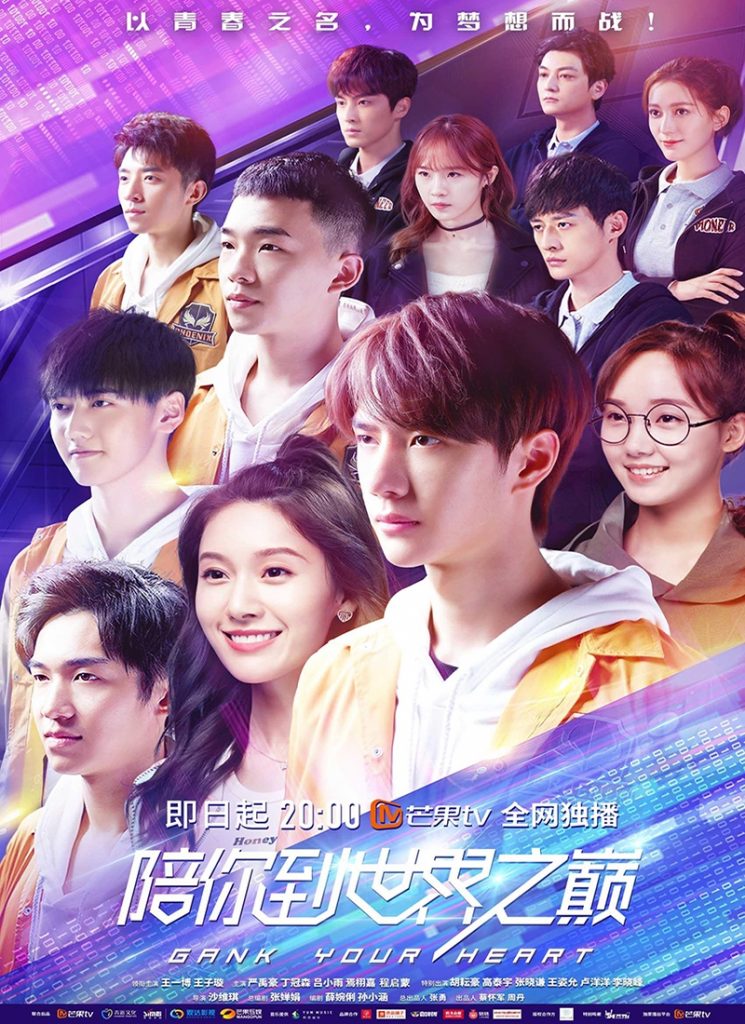 I’m continuing my spiral into Chinese dramas, but this time I’ve done a bit of a pivot. Instead of watching a Xiao Zhan vehicle, I settled on a Wang Yibo one. I’d heard very good things about Gank Your Heart just in the scant few weeks that I’ve been dipping my toes into The Untamed fandom, and I decided it was finally time to check it out. I’m so glad that I did.

Gank Your Heart is the first realistic C-drama that I’ve watched so far. My previous three binges – The Untamed, Oh! My Emperor, and Super Star Academy – were all fantasy shows (xianxia and wuxia) with a focus on supernatural abilities and martial arts. This show, however, focuses around gaming and other online industries. It’s centered around the China league for iConquer, a fictional, multi-player fantasy game similar to World of Warcraft.

Our two lead characters for this story are Ji Xiang Kong (Wang Yibo), a professional iConquer player, and Qiu Ying, a streamer who works for an esports website. Qiu Ying has only recently been transferred to esports and knows nothing about iConquer, so when she is sent to cover the international championship, she resorts to slightly underhanded means in order to secure the coverage that her boss is demanding of her. In doing so, she runs afoul of Ji Xiang Kong, who sees right through her methods and decides to mess with her.

Their relationship involves a lot of back and forth, with both sides refusing to give ground even as they both deal with professional rivals – his in the form of a vindictive manager trying to force him from the team and hers in the form of a jealous coworker out to sabotage her career. But as things escalate outside of their control, they become friends, allies, and eventually more, and their romance is extremely sweet to watch unfold.

I mentioned in my review for Super Star Academy that is often difficult for me to get into canon (heterosexual) couples, because I feel that the development usually isn’t there. Ji Xiang Kong and Qiu Ying have a nice slow burn of a relationship, starting out as enemies, moving to friends, and then finally to more.

But their issues don’t stop once they get together and we get to see them handle things as a couple, which is nice. At least in a lot of American media, the couple just getting together is the endgame and you never get to see the relationship itself. The “happily ever after” is implicit; here, it’s hard-won.

I absolutely loved Gank Your Heart. In fact, I’ve already rewatched all 35 episodes and it was even better the second time. There is a lot going on in this show, from internal power plays to family drama to multiple romances to underdogs fighting against the system. As soon as you think they’ve solved one problem, another one pops up, either in the form of a new professional rival or an unexpected love interest. It was a non-stop ride from start to finish and it was often extremely hard to stop for the night to go to sleep.

I’m not all that familiar with competitive gaming, so I’m not sure how accurate the portrayal is, but the tournament scenes are actually really exciting, considering you’re just watching people play video games.

One of the things that made the show so interesting, aside from the premise, was the character dynamics. Both Ji Xiang Kong and Qiu Ying are forced into a few different professional situations, and I love seeing how they adapt to their new environments. They have contrasting attitudes when it comes to dealing with the harassment they face – both online and from others in the industry – and they make quite a formidable pair when they’re together. They’re also both extremely supportive of each other’s dreams.

What makes Gank Your Heart so great is that it’s more than just a romance drama where the woman supports the man during his career. Qiu Ying is pursuing her own goals. Though she starts the show not understanding much about the game, she eventually discovers her love for commentating and sets her sights on being a professional commentator. She struggles a lot but is very determined, and it’s really inspiring watching her chase her dream. Sometimes she can be a bit of a doormat, but she is set on working hard and climbing the ladder legitimately.

But it’s not just the story of Ji Xiang Kong and Qiu Ying. Don’t get me wrong, it’s mostly about them, but you also have a whole host of supporting characters with their own back stories, motivations, and goals. People fit into the story in unexpected ways; there is one character who you think is after one thing, and then about two-thirds of the way through the series you realize he’s after something completely different. When this particular reveal happened, I was pleasantly surprised, because it changes the entire dynamic of the show for the better.

There are some side characters that I didn’t care for (mostly the antagonists), but there are some in whom I became very invested – particularly Sun Ze Yi, a former pro-iConquer player who was a member of the first Chinese team to win the championship but left the team under mysterious circumstances just before the finals. I also really loved Lu Yi Yi, Qiu Ying’s best friend and former colleague.

Qiu Ying and Lu Yi Yi’s friendship is great. One of the things I loved about Oh! My Emperor and found lacking in Super Star Academy was the strength of the female relationships, but Gank Your Heart gives you a ride-or-die female friendship that is just spectacular. Lu Yi Yi is the ultimate supportive best friend, backing Qiu Ying up in all aspects of her life, whether it’s reminding her to sleep and eat in the middle of a gaming binge, giving her a place to live after she has to sell her place, or being totally willing to throw down with anyone who messes with her.

Also, Lu Yi Yi has her own side plot where she’s trying to build her career. I love that she isn’t just an extension of Qiu Ying’s story, and that she has her own complete arc.

I was bothered by the fact that the two main female antagonists – Qiao Xin Xin, Qiu Ying’s colleague, and Miya, Ji Xiang Kong’s idol ex-girlfriend – were rather stereotypical. There are reasons given for their behavior that explain but don’t excuse, and Miya in particular needs to learn how to respect people’s boundaries. But both are actually confronted with their nefarious deeds by people they admire, and that gives them the opportunity to grow as individuals. It was nice to see, especially when contrasted with some of the male antagonists, who didn’t get that chance.

I’ll also say that it kind of rankled a bit that the antagonists weren’t brought to task for all of their wrongdoings. They are “punished” in various ways for specific things, but not everything they do is even known to the bulk of the characters. For example, Ji Xiang Kong’s vindictive manager literally assaults Qiu Ying, and though Ji Xiang Kong intervenes and punches him, no one else ever learns about the incident, and it is never mentioned again. There is an instance of Qiao Xin Xin blackmailing another colleague in a rather gross manner that gets swept under the rug as well. I really wanted these to be acknowledged and the offending parties to be further punished, but perhaps I’m just super bloodthirsty.

Honestly, though? I had very few issues with Gank Your Heart. The characters were all great; everyone was flawed and fleshed out (except for the manager, he just seemed like a stereotypical bad guy – I never did figure out what his issue was) and fantastic. The drama was real, and even though I don’t like miscommunication as a plot device in dramas, I think it was well done in this case. They didn’t drag things out; episodes may end on a cliffhanger, but issues are addressed relatively quickly.

In short, this is just a really good show. It’s got solid plot progression, everyone is given the chance to grow, and the ending is extremely satisfying. I very much enjoyed it and highly recommend it.