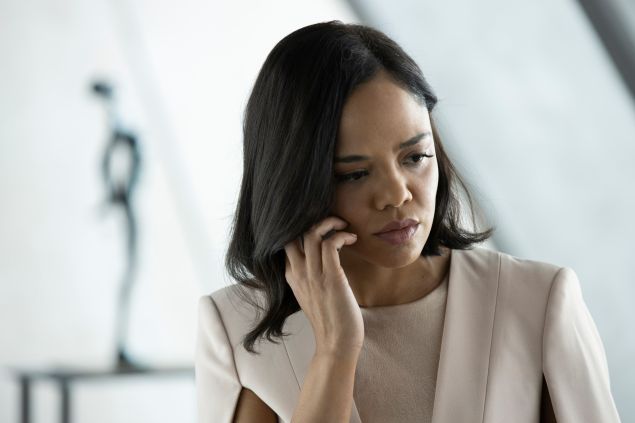 ‘Decoherence’ felt like a much needed pressure release after an incredibly tense few weeks on Westworld.  I’m ready for everyone to turn it up to 11 next week.

It feels weird starting my review of ‘Decoherence’ at the end of the episode, but I feel like there’s no other way to start it without screaming “PLEASE GIVE TESSA THOMPSON ALL THE AWARDS” at the top of my lungs, just like I did when the episode finished.  The ending reaffirmed my love for Tessa Thompson and made me realize just how limited she had been last season with Charlotte Hale’s base character.  Now that there’s an added layer to her, we truly get to see Tessa shine.  She’s a phenomenal actress and we shouldn’t forget that.

Charlotte is the character I’m most interested in seeing turn things up to 11 next week.  Her family was keeping her in a certain state of mind where protecting them was the primary goal, but that’s gone now.  All she’ll have is her revenge.  While it seems likely that that revenge will be turned on Serac (as we can assume he’s the one who blew up the vehicle), it could also be aimed at Dolores.  As much as I love Dolores, I’m equally as excited to see her deal with this potential challenge.

‘Decoherence’ also made me realize that this season feels different in regards to the powerful women on the show.  They’ve been badass since the very beginning, and they’ve been absolutely gorgeous since then as well, but for some reason they feel less subjected to the male gaze this year than they have in the past.  Perhaps that’s intentional as the hosts break free from their subjugation. 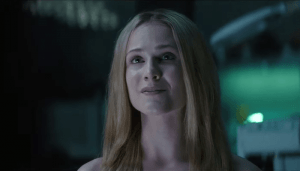 This difference in framing was most notable when the host Dolores was speaking to Maeve.  Her hair was longer and covered her breasts, and the decoration on the windows around her room strategically blocked various points of nudity.  There was only one brief moment where I spotted any real nudity in that scene, which is so incredibly different from how they were portrayed in the first couple of seasons.

Of course, Maeve had some more extensive nudity earlier in the season, so the change didn’t happen immediately.  It felt like a fairly gradual shift that left me detecting that something was different but unable to put my finger on it.  This was just the most noticeable moment.

The nudity of the hosts isn’t the only difference I noticed.  The three main women of the season – Maeve, Dolores, and Charlotte – are all fairly badass without being too terribly cliche with the ‘femme fatale’ archetype. Dolores is probably the closest to this archetype this season, but even so, we have an extensive history with her that adds additional layers that are often missing with these types of stock characters.  And for her, leaning towards femme fatale is a drastic departure from where she was in the first season to begin with.  They’ve all evolved into something different and all have more agency by the time ‘Decoherence’ comes around than they did upon their initial introductions.

Perhaps this is a change that would come naturally in any narrative, but it’s a change nonetheless. And it contributes to the added agency these women have this season.  I’m incredibly pleased.

The only thing that doesn’t please me about any of this badassery is that all the villains seem to have the aim of a Stormtrooper, which sort of takes me out of it.  But whatever.  That’s a fairly common trope in action so I’ll forgive it.  For now.  The antagonists need to start landing some shots or these get away scenes are going to start falling flat.

‘Decoherence’ also resonated in a weird way considering our current global situation.  At one point a character states that the whole world is shutting down and he ‘can’t even get a cup of coffee.’  While I’ve been remarking that this season of Westworld felt like it was headed towards an eerie apocalyptic narrative, which might be weird while we are going through our own apocalyptic reality, I didn’t quite expect one moment to hit quite so hard.  The whole world has stopped both in this fictional universe and our own reality.

Granted, the triggers for these two world stopping events are obviously quite different.  Westworld is dealing with a robot uprising and we have a pandemic.  Their world has stopped because society can’t handle seeing how everything has been determined for them while ours has stopped so we don’t spread disease to one another.  This isn’t a one to one comparison, but that one line did bring it closer to home than I expected.

Still, even with this eerily prescient line, Westworld is providing a valuable escape from reality.  I’ll be incredibly sad when this ends in two weeks.  After Fugou Keiji got delayed, this is really my last bit of current entertainment left and I’m about to be tapped dry for current entertainment.  I can go back to some old favorites I guess, but having new content coming out has been a big help keeping my week organized into some sort of rhythm.  When Westworld ends, I guess I’ll just descend into scheduling chaos.

‘Decoherence’ also had the meeting of the Williams, which was an interesting way to show William’s internal struggles.  It also put Ed Harris and Jimmi Simpson in the same room for once, which was amusing. It also highlighted how these two actors very much don’t look alike.  But again, whatever man.  They are both incredibly talented so I’ll forgive this too.

I feel bad saying this because Ed Harris is so legendary, but William’s plot is probably the only part of this season that isn’t exciting me much.  I understand his importance to the plot, but I just can’t bring myself to get very excited for his scenes.  I think the Meeting Of The Williams is probably the most interesting thing so far.

We have two weeks left and then, as I said, I’ll descend into scheduling chaos.  I’m dreading the oncoming hiatus and hope the fan theories and meta analysis can keep me entertained in the interim.

Previous:“Boruto: Naruto Next Generations” Manga Issue 45 Review: Defection
Next: Words Cannot Describe How Much I Love “Gank Your Heart” But I’m Gonna Try