The third episode of Tian Guan Ci Fu (Heaven Official’s Blessing), ‘Confidant’s Past Grudge’, continues the Ghost Groom arc and familiarizes us with how ghosts work in the world of TGCF.

We finished the last episode with the revelation that it wasn’t a Ghost Groom they were after, but rather a Ghost Bride.  ‘Confidant’s Past Grudge’ jumps right back into the action after Xie Lian comes to this conclusion and introduces us to our Ghost Bride, Xuan Ji.  She’s the vengeful ghost that’s been responsible for the seventeen missing brides over the years on Yu Jun mountain.

Xuan Ji is a Wrath ranked ghost, which is the second highest ranking of ghost in the TGCF universe.  The rankings go: Fierce (恶), Severe (厉), Wrath (凶), and Devastation (绝).  The translations here seem slightly different in the donghua for the lowest two rankings.  They’ve seemed to have chosen “Wickedness” instead of “Fierce” and “Ferocity” instead of “Severe.” But “Wrath” seems to have carried over between the various translations, and the most important thing to know is that this means Xuan Ji is incredibly powerful.

The most important thing we can take away from Xuan Ji’s story is just how tied to emotion ghosts actually are.  You don’t die and then just become a ghost out of boredom.  There’s a reason.  And that reason is often incredibly tragic.

In Xuan Ji’s case, she is reacting out of anger for being slighted by her former lover, General Pei.  He refused to marry her despite their relationship during the war.  Out of sadness and anger, Xuan Ji broke her own legs before killing herself.  This is the titular ‘past grudge’ of the episode, and the driving force behind her continued existence as a Wrath Ghost.  Her intense emotions make her react in violent ways and led to the deaths of the brides.  It’s not a pleasant scenario, but it’s important to illustrate just how intense ghosts’ emotions tend to be.

But while Xuan Ji ended up a ghost, General Pei ascended to Heaven and became a God.  His continued existence created an opportunity for her turmoil over the situation to continue to grow, eventually leading to the current tragic situation on Yu Jun mountain.  If he hadn’t had temples all over the countryside reminding her of his existence, she may have eventually moved on and dissipated.

Xie Lian shows great empathy for her, despite the fact that she wreaked havoc on these poor rural villagers and led to many deaths.  But that’s sort of the lesson here.  Ghosts can be violently emotional, but they were people once, and often became this way because of tragedy in their mortal lives that they were unable to move on from.

At the end of the day, however, she needs to be dealt with and she’s taken away by the other General Pei (the Junior one, who is a relative of the former, though there’s a couple centuries between them).  With the Wrath ghost removed, the people of Yu Jun mountain can continue with their lives. 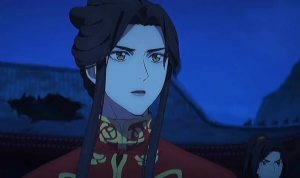 The entire sequence battling Xuan Ji in ‘Confidant’s Past Grudge’ features our Xie Lian in his bridal dress disguise, which I absolutely love.  There’s a duality to Xie Lian where he can be beautifully graceful, but also kick a whole lot of butt in the same breath.

So far they are depicting that duality incredibly well, and I once again want to give a shout out to the animators for bringing him to life so perfectly.  Thank you for doing my Taizi Dianxia justice.  We are blessed.

But there was more to ‘Confidant’s Past Grudges’ than just the Xuan Ji bits.  This episode also saw the tragic death of Xiao Ying.  I’ve got to admit that I forgot that she died so quickly in the story and was actually somewhat surprised by it. Yes, I’ve read the book (multiple times), but it took me many days to get to this part so her getting killed in just three episodes hit faster than I was anticipating.  That’s my fault for not adjusting to the pace of the story in this format, however. My bad.

But this also illustrates that those that die in peace can move on without becoming a ghost.  Xiao Ying may not have been able to move on if Lang Ying’s future was in question, but Xie Lian promises to take care of him on her behalf, so she could move on peacefully.  Not all deaths result in a lingering spirit.  It takes an intense emotional attachment to the world to tie them here, which Xiao Ying did not have once she knew the person she cared about would be looked after.

Speaking of Lang Ying, he also had a pretty important part in ‘Confidant’s Past Grudge’ besides being an innocent bystander that Xie Lian needed to save.  The episode ends on him unwrapping the bandages from his face and revealing boils with faces on them.  In other adaptions, this plague is translated to the ‘Human Face Disease,’ but it seems like the donghua has dubbed it the ‘Multi-Face Disease.’

The disease isn’t depicted as graphically as I was expecting.  In fact, if you haven’t read the book I’m not even sure you could tell that each boil has a face on it.  These aren’t just gross boils, but gross face-y boils that are absolutely horrifying.  So adjust your disgust over these moments accordingly.  It’s gross and weird.  And Xie Lian’s face of horror is absolutely warranted by it. 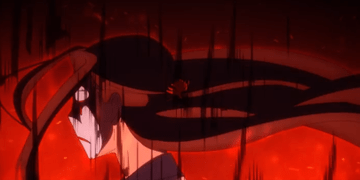 This triggers several flashbacks of the disease for Xie Lian, and introduces us to a mysterious character in a mask.  We’re told these flashbacks are from the fall of Xian Le, which was Xie Lian’s Kingdom 800 years ago.

There’s a lot of backstory here that we obviously didn’t get in this episode and I strongly discourage any donghua-only folks from googling any of this.  These are HUGE spoilers.  So be patient on this and you’ll be rewarded later.  I promise.  It just might take a while.

Yes, there was no Hua Cheng in ‘Confidant’s Past Grudge,’ but we’re following a 244-chapter book here and there’s a lot to get through.  This arc had its purpose both the expand the mythology of the world we’re in and letting us get to know our main characters more before we launch into other parts of the plot.

I hope you all are enjoying the world that is being laid out before you and decide to stick around for the long haul.  It’s one of the most satisfying stories I ever read and I hope you’re enjoying it, too!  Let me know your thoughts in the comments.