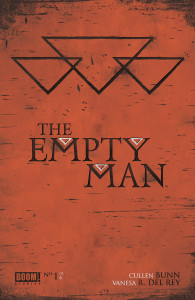 BOOM! Studios has been having a great year, with a lot of new series selling out. (Retailers: why aren’t you pre-ordering more copies? Come on, people!)

June 24,  2014 – Los Angeles, CA – Award-winning publisher BOOM! Studios is excited to announce that the debut issue of its newest horror limited series, THE EMPTY MAN, has sold out at the distributor level. This is the seventh time in 2014 a debut issue from the publisher has sold out, following EVIL EMPIRE, DEAD LETTERS, LUMBERJANES, THE WOODS, BEE AND PUPPYCAT and BIG TROUBLE IN LITTLE CHINA. BOOM! has rushed to a second printing like it was fleeing from a disease! Created and written by Cullen Bunn (The Sixth Gun, Magneto) and illustrated by Russ Manning Award nominee Vanesa R. Del Rey (HIT), THE EMPTY MAN is an eerie, J-horror-inspired crime procedural story about a mysterious disease with an unknown cause, and, even worse, no known cure.

“THE EMPTY MAN is our first time working with Cullen Bunn and the experience has been as rewarding as we expected,” said BOOM! Studios Editor-in-Chief Matt Gagnon. “When Cullen came to us with this brilliant idea for a horror series we knew that pairing him up with Vanesa and her visceral artwork would be a prime-time event. These are two exceptional talents at work on a story that’s utterly suspenseful and haunting. Even though we’re sold out at the distributor level there are still some copies to be found at various retailers, and we’ll be delivering a second printing as quickly as possible.”

It’s been one year since the first reported case of the Empty Man disease, and no drug has been able to slow its progress. The cause is unknown, and the symptoms include fits of rage, hideous hallucinations, suicidal dementia, followed by death, or a near lifeless, “empty” state of catatonia. As murder cults rise nationwide, the FBI and CDC enter into a joint investigation of the Empty Man, hoping to piece together clues to stop the cult and uncover a cure.

And here are the deets:

THE EMPTY MAN #1 second print ships with a new cover by Scott Newman and carries a retail price of $3.99 under Diamond order code MAY148124. It is anticipated to be in stores on July 23rd. Not sure where to find your nearest comic retailer? Use comicshoplocator.com or findacomicshop.com to find one!

BOOM! even shared with us how to reach them and the book’s creators. Hooray, social media!