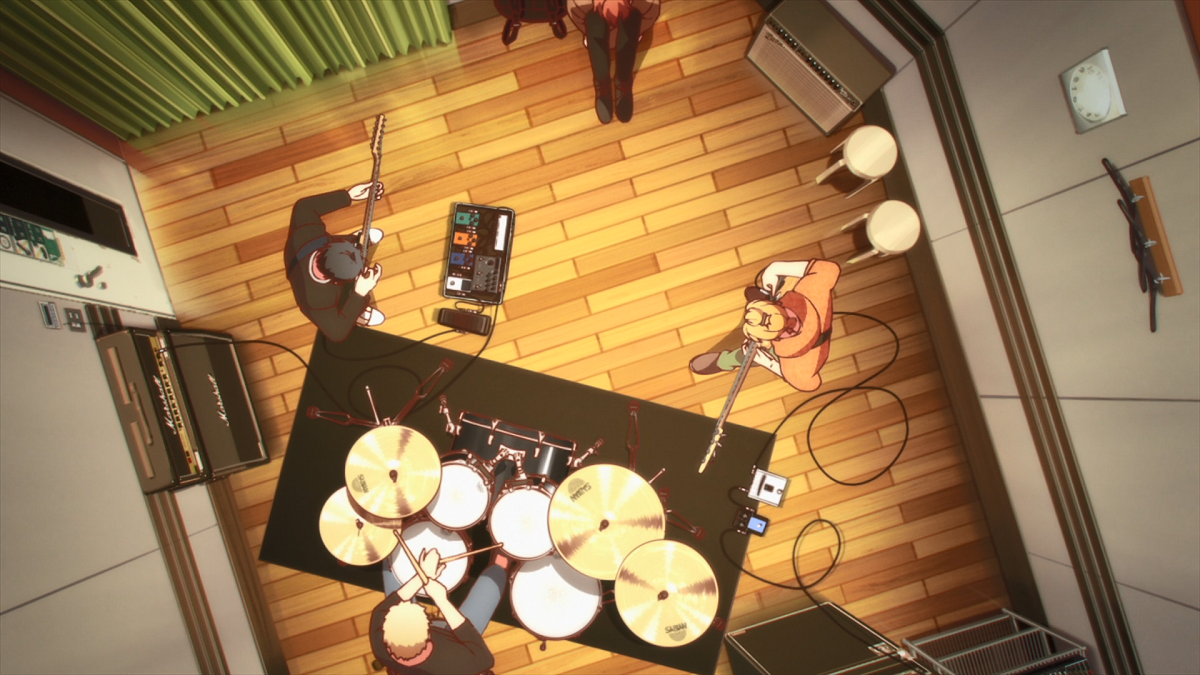 This is the anime I’ve been waiting for ever since they announced that it was coming out this summer. “Boys in the Band” is a solid introduction to what looks like a well-done anime with a main gay pairing. I am 100% here for this.

“Boys in the Band” introduces us to Mafuyu – a young man who carries around a guitar without the slightest idea of how to play it – and Ritsuka – a guitar player who has seemingly lost all passion for music. A chance encounter in the school stairwell leads Mafuyu to ask Ritsuka if he’ll teach him to play, which leads to Ritsuka introducing Mafuyu to the rest of his band. Mafuyu is captivated by their jam session, while Ritsuka is into the music more than he has been in a while.

There was no way I wasn’t going to watch this anime. A BL anime centered around a rock band? Sign me up. And after watching the first episode, I am all in on Given. The soundtrack is pretty amazing – the band’s jam session is a thing of beauty – but the show also uses silence effectively. When Ritsuka first meets Mafuyu in the stairwell and Mafuyu slowly slides across the steps to give him room to sit, I just thought that was very well done.

As for the animation, I again have to point out the band’s jam session. It’s pretty easy to get lax when the animation calls for something intricate (like say, fingers plucking at guitar strings?), but I didn’t notice anything of the sort in “Boys in the Band.” I was as captivated by Ritsuka playing as Mafuyu was. Yes, they reused a couple of clips but I think that can be forgiven considering the quality of what we got. The backgrounds are gorgeous and give off a very warm feeling. 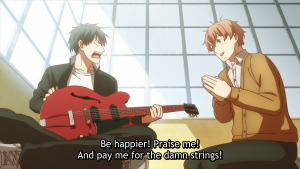 It’s funny, too! Ritsuka grudgingly replacing Mafuyu’s strings just because he sat there all dejectedly was great, as was Mafuyu’s poorly-hidden stalking. When Mafuyu hid behind the post and acted all surprised to see Ritsuka, I actually laughed out loud. Haruki and Akihiro’s dynamic at practice was also pretty funny. Since there seems to be some overlying trauma, particularly regarding Mafuyu’s past, it will be good to have these moments of levity.

Mostly I’m excited because I’ve heard very good things about this title; namely that it isn’t as trope-y or problematic as BL can be. I liked that the romance seems obvious right from the get-go. Ritsuka makes a comment about playing Mafuyu’s heartstrings that would be difficult to take as anything but romantic, and not only does he randomly think of Mafuyu at various points throughout his day, he gets worried when Mafuyu doesn’t appear in the stairwell for a while.

(Also it turns out that the author/illustrator – Natsuki Kizu – does Haikyuu!! doujinshi so that’s about a thousand extra points in this show’s favor.)

“Boys in the Band” is a phenomenal first episode that will hopefully hook a lot of people the way it did me. So naturally it premieres just in time for me to go on vacation and miss the next two episodes.