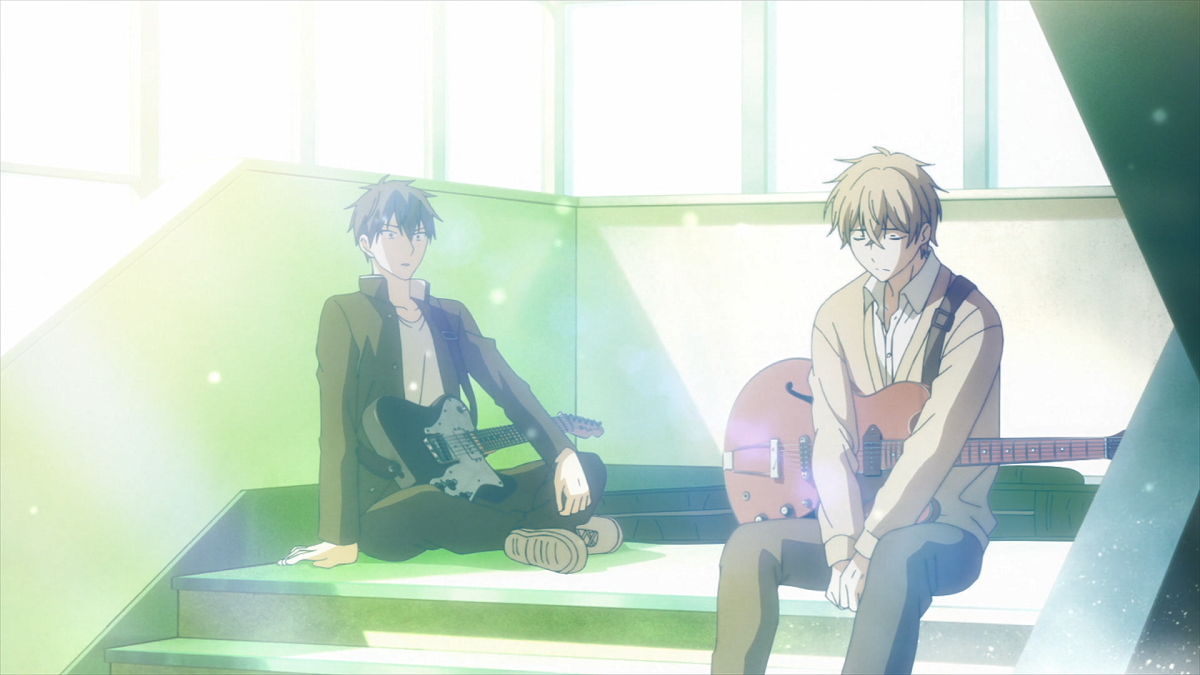 Following up on a phenomenal first episode, Given delivers a solid one-two punch with “Like Someone in Love” and “Somebody Else,” which continue to develop the natural character relationships as well as shine a little light on the mystery that is Mafuyu.

“Like Someone in Love” and “Somebody Else” are both stellar episodes on their own, but I’m almost glad that vacation forced me to review the two as a single entity because I think they go well together. There are some similar aspects of both episodes that work well paired in a review, and almost everything is about Mafuyu. As much as I want to know about all of the characters, Mafuyu I think is the most shadowy one. As Ritsuka says, there is a lot about him we don’t know.

The biggest point, obviously, is Mafuyu’s singing voice, and how much Ritsuka was not expecting to be affected by it. Mafuyu, on the spot, just busts out with that melody, and sunbeams come from the heavens as Ritsuka has his big gay epiphany. Moved to the point of tears? You’ve got it bad, boy. Given clearly wanted to keep this kicker a secret – the ED, which is sung by Mafuyu, was a simple instrumental in the first episode – but it won’t be much longer until we get to hear it in earnest since we only spent one episode wondering if Mafuyu would join the band. Some fans are concerned about the quality of his singing, as the manga emphasizes how amazing his voice is, but I think we need to wait until we hear it for real (the soft song in the ED is not the kind of music this band will be performing) before judging. 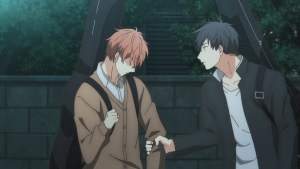 Mafuyu’s past is also a common thread. Really, it will be a thread throughout the entire series. In “Like Someone in Love”, you start to worry about Mafuyu because he seems so airheaded, but the cold open in “Somebody Else” indicates that he’s recently experienced a trauma and is likely still recovering from it. You may remember from the first episode that it looks as though someone close to Mafuyu committed suicide – and Mafuyu was likely the one who found the body. “Somebody Else” expands on this with flashback scenes – Mafuyu at a funeral, Mafuyu curled up in bed – and we also meet someone from his past who mentions that he just dropped off the face of the Earth. It’s from this someone – Hiiragi – that we discover the guitar Mafuyu carries once belonged to someone called Yuki. Who is Yuki, and who was he to Mafuyu? 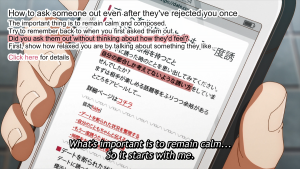 Another thing is Ritsuka’s unbelievable awkwardness. This boy needs help. I love how he’s so obsessed with Mafuyu after only a few meetings – devoting class time to planning how best to instruct Mafuyu on the guitar, looking up ways to invite him into the band (by searching how to ask someone out), tracking him down to talk to him – yet he couldn’t do something as simple as getting the poor boy’s phone number. A lot of the humor in this series comes from Ritsuka’s sheer failure at being smooth.

The writing and direction continue to impress. I like how all of the relationships and conversations feel genuine, and using manga extras to flesh out the episodes is working pretty well. I’m a little concerned about the pacing, considering there are only supposed to be 11 episodes, but everything has been so well-done so far, so I trust the team to do the story justice. I also appreciate the development of the side characters – the little scenes with Haruki and Akihiro are a wonderful touch (and is there something there?), and even Ritsuka’s sister and friends are taking shape.

A nice tidbit that was pointed out on Reddit that I didn’t catch – all of the episode titles are also songs.

I am really enjoying this series. I was excited about it when news first broke that it would be an anime. I’d heard pretty good things about it and was hopeful that it would be good; BL series tend to have problematic elements, so it’s extremely refreshing that Given is so far just a normal romance series, only with two boys instead of a boy and a girl.

Previous:“The Boys” Season 1 Review: Has Nothing New, But Is Still Kind Of Fun
Next: ‘Van Helsing’ Previews Season Four at SDCC 2019