The Mandalorian 1×5 Review: Chapter 5 “The Gunslinger”

I’ve been solidly on board The Mandalorian right from the beginning, but I have to admit they lost me a bit with Chapter 5.

Don’t get me wrong, Chapter 5 – titled “The Gunslinger” – certainly had its moments, but compared to the first four episodes, it was a weak one, to say the least. First, it was far too short – after the intro and minus the five minutes of credits, I believe it was around 29 minutes long. Second, in those 29 minutes, it didn’t really do or establish anything new. 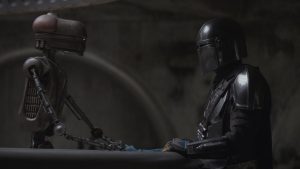 It was basically just 29-ish minutes stuffed chock full of nostalgia, to the point where not even a third of the way into it, I was thinking ‘enough is enough’; and halfway in, I was solidly in the ‘this is way too much’ mindset. Between the pit droids, the Mos Eisley Cantina, Budget James Franco as A [Wannabe] Han Solo Type, banthas, Tusken Raiders, dewbacks, *even a high ground comment* (plus bonus mention of Beggar’s Canyon!)…well, let’s just say that all of that could have been forgiven if Chapter 5 had actually added anything to the show’s overall plot – but as far as I can tell, it didn’t.

Oh sure, we got that brief clip at the very end of a mystery character standing over Fennec Shand’s dead body. And hey, perhaps the show will take us back to Tatooine and we’ll see Mama Sedaris again. But for now, this episode felt like an odd combination of filler and a landslide of easter eggs…and this after I was lulled into the belief that The Mandalorian was better than all that. 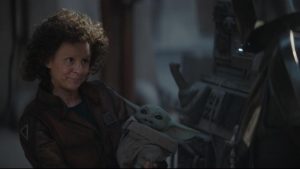 Of course Baby Yoda was still a highlight (how could he not be?), but I agree with my friend who asked, “Is it me, or does he look really doll-like in this episode?”

Don’t get me wrong, I’m still enjoying the show overall. I just prefer when they pepper the nostalgia throughout my Star Wars, rather than shoving it in my face over and over again like they’re trying to get a toddler to eat their vegetables.

How did you feel about “The Gunslinger”? Any theories about who that mysterious character was at the end? Let us know in the comments!

Previous:Star Wars: The Rise of Skywalker Sneak Peek During The Mandalorian
Next: Disney+ Reportedly Giving White Prince Anders From “Aladdin” a Spin-Off!