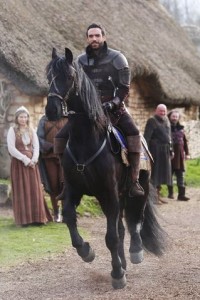 They are missing out because Galavant is a delight. A laugh out loud, eminently rewatchable, well-constructed and excellently-cast experience. It’s also eight to ten episodes a season (thirty minutes an episode, two seasons so far), so it is quick and easy to consume.

Galavant tells the story of the titular knight (Joshua Sasse) and his companions. The plot isn’t all that important, as it is just there to set up the tropes Galavant eventually knocks down, but the set up is: Galavant’s lady love Madalena (Mallory Jansen) is forced into marriage by King Richard (Timothy Omundsmon). Galavant wallows until Princess Isabella (Karen David) convinces him along with his squire, Sid (Luke Youngblood) to try and rescue Madalena from Richard’s clutches, and reclaim the throne Richard has taken from Isabella’s parents. 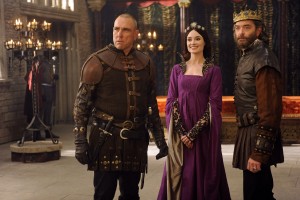 Pretty much everyone will find Galavant funny, if they can get past the fact that it’s musical theater. The jokes are saturated into every layer of Galavant, which is why it has high rewatch value. Even the episode titles are great, including some A+ puns: “Joust Friends,” “About Last Knight,” and “Aw, Hell, The King.” My personal favorite is the season two opener: “A New Season aka Suck It Cancellation Bear.”

I would hazard that Galavant prioritizes comedic ability over singing talent, but that’s just fine for the brand it has cultivated. It’s not as if they don’t take the musical theater aspect seriously–the score is by the famed broadway duo Glenn Slater and Alan Menken. It’s moreso that they don’t take themselves too seriously. After the final epic notes of “A Hero’s Journey” near the start of season one, Galavant begins to wheeze. “Oh, holy s***, I’m out of shape. My tummy hurts. That was a long song.”

Although the entire main cast is wonderful, Omundsmon’s King Richard seems to be the fan favorite. With lines like: “sure I’ll kidnap a woman and force her to marry me. But after that, I’m all about a woman’s rights. I’m a modern 13th century man,” it isn’t hard to see why. 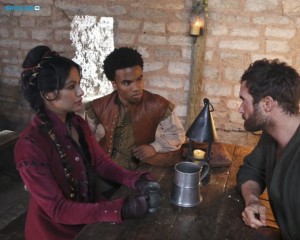 “I think we’ve got something really good going on here,” Galavant, the dashing white male lead, says to his companions in the fourth episode of season one. “We’re gorgeous, very diverse.” “We are diverse,” Isabella replies (Karen David is of Asian descent). “Super diverse” says Sid, the Black Jewish squire. This is an example of the kind of breaking-the-fourth-wall brand of humor that is a constant presence in Galavant. Unfortunately, I would say it’s not strictly true–while it’s marvelous those two characters are of color, (especially the romantic female lead) the representation train stops there. All other main characters are white, and skew male. The queer presence is next to nil, except in mild punchline form in season two. If (and this is an unfortunately large if) Galavant gets a third season, I would like to see the show take steps to diversify their characters and cast.

Sometimes celebrity guest stars can be aggravating; not so with Galavant. These include John Stamos, Weird Al Yankovic, Ricky Gervais, and Kylie Minogue. This is another instance where the musical theater format is a huge boon for the show. These celebs can deliver single serving songs and scenes and then be on their merry way, and no one has to wonder why or where they went; it’s just a normal part of the genre. 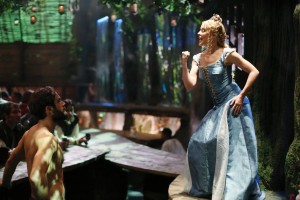 Galavant might not get another shot at being on television, and while that would be a shame, at least they took the time to tie up their main storyline at the end of the second season. If all of Galavant ends up being eighteen stellar episodes, that’s still a net positive for television entertainment.

If you’d rather read this recommendation in the style of Galavant’s theme, here you go:

This year on ABC,
A show was filled with glee
But no, it wasn’t Glee, it’s Galavant!
This one has singing too
Guest stars out the wazoo
It also starts with G, it’s Galavant!
Please! if you’ve a mind you have to try it
Self-aware and a laugh riot
Phew! I hope it gets renewed!
And not just on hulu!
Because it’s truly Gaaaaa-laaaaa-vaaaant!