Comic Con Badges Just Got Harder to Get

San Diego Comic Con International is often cited as the “biggest convention of it’s kind in the world.”  What started out as a small comic book convention in San Diego with a few hundred attendees has ballooned up into an event that attracts 130,000+ attendees every year.  It also attracts some of the biggest names in TV shows, movies, and video games, right along side the comic books that launched the convention back in 1970.  The number of attendees has nearly doubled in just the last decade alone, meaning that each year badges become more and more difficult to obtain, much to the chagrin of long time con goers.  Attendees now have to wait through an online waiting room to purchase badges and use a Member ID that was created before purchasing.  If you are a first time con goer, go make one now because they tend to close off Member ID registration a few days or weeks before badges go on sale.  Things have changed dramatically since the day that you could walk up to the convention, purchase badges at the door, and stroll leisurely through the exhibit hall.  It has truly become the Juggernaut of conventions.

One tradition for repeat con goers that has undergone major changes these last three years is the option for previous attendees to pre-register for next year.  In years past, those attending the convention could purchase a certain allotment of badges for the following year at the convention itself.  In 2012 the pre-registration badge sales were moved from being at the convention to an online system held in August of that year. There was absolutely no on-site registration for the following year, but attendees only had to wait a few weeks to get them so things were resolved very quickly.  For most people the process ran relatively smoothly.  This year people expected much the same, but August came and went without pre-reg actually happening.  Initial announcements placed it sometime in November or December, but delays have pushed it into “early 2014.”  This is the longest pre-registration people have ever had to wait to purchase badges by a good six months.

Here we are 10 days into the new year and we still don’t have a date set, but what we do have is a lot of information about how this year’s pre-registration (and possibly general registration) will work.  For all the basics check out the official pre-registration information page.  For details about major changes, read on…

The first major change is the inability to purchase four day badges all in one go.  Instead you have to select each day individually.  This has led to some confusion, which prompted CCI to update on their blog that you can select all four days by clicking the “Preview Night” option.  Preview Night, which is the opening of the convention for a few hours the Wednesday night before the con, is only available to those who purchase all four days.  Speculation over the initial change was that it was to cut down on people who purchased four day badges but had no intention of attending all four days.  By making the Preview Night button an option a sort of “select all” function, this could very well drive up demand for Preview Night badges, which works against the original reason for changing things, in my opinion.  Though the $10 increase for a Preview Night badge may help balance out demand.  We’ll see.

Either way, with all the added clicking involved and the moderate price increase this will cause a lot of people to think long and hard about what days they want to attend.  If they plan on leaving on Sunday they might just leave those badges unchecked this time around.  This is assuming they don’t just click the “Preview Night” box to save a few seconds in the waiting room.  If they do that, there really isn’t any advantage over this system than last year.  If Saturday badges sell out quickly, though, nobody will be able to purchase Preview Night badges at all.  It’s certainly an interesting way of doing things and the pitfalls and benefits will only really be tested once pre-registration actually occurs.

Purchase Up To Three At A Time

Like the past two years, only those who attended the previous year’s convention are actually eligible to participate in this years pre-registration.  Qualifying people can purchase for themselves and up to two other qualifying members.  It’s important to note that those other two members also had to have attended last year’s convention.  You can’t buy for friends that didn’t attend.  They’ll have to wait until general registration on… some undisclosed future date.  For a typical family of four this could be an issue.  This means the family has to split up on two computers to try for badges for everyone.  If the family purchases three badges and then gets back in line afterwards chances are very high that everything will be sold out by the time they reach the front of the line.  For the past few years badges have been selling out in just an hour or two meaning that you can really only afford to go through the line once.  If you do manage to get to the head of the line a second time chances are only Sunday badges will be available.

How do you pick which days to go?

Without a schedule available, this is hard to say.  I always prioritize Sunday first for myself because Doctor Who and Supernatural have had their panels on those days for at least the past three years, but Sunday tends to be the lowest priority for everyone else.  Saturday almost always sells out first.  That’s when the big panels are typically held.  If you want to see something related to the Marvel Cinematic Universe, I’d put good money on it being on a Saturday.  There will be nothing official, though, until just a few weeks before the convention.  Companies begin releasing information about their own panels slowly once scheduling starts to get locked down, but until the official schedule is released by CCI nothing is for sure.  Thursday and Friday in particular are wild card days, so deciding between those is really best done by coin toss.  Due to the fact that nothing is certain by the time badges go on sale, most people are likely to purchase all four days just in case.  This is exactly the type of behavior that CCI is attempting to clamp down on, but without a schedule I’m not entirely certain it’ll be curbed by much. 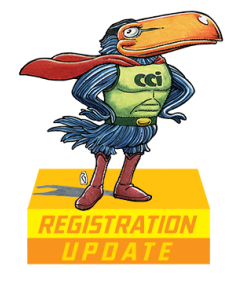 If you plan on attending this years convention, whether you are a returning attendee or a new con goer, I highly recommend checking out the Friends of Comic Con forum.  It’s an unofficial forum run by attendees who really know what they are talking about.  You can definitely ask questions here and I can try my best to answer them, but there’s a lot more knowledge over on those boards.  You might also want to keep your eye on the Toucan Blog.  It’s the official source of information. Then there’s this unofficial Comic Con blog that’s also super helpful.

Good luck! And may the odds be ever in your favor.