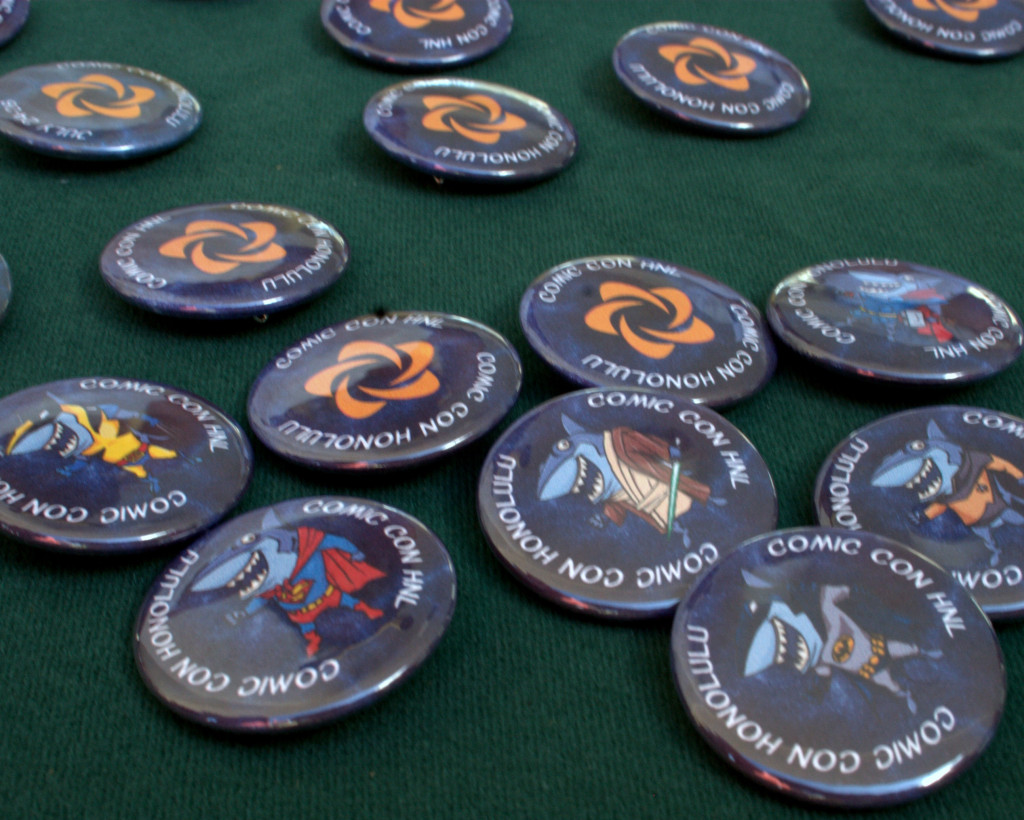 Typically I go to one convention a year and it’s the biggest of the big. San Diego Comic-Con is my bread and butter, but I’ve also tangoed with Supernatural conventions and large anime conventions in the past on occasion as well, though neither of those are permanent staples in my convention diet. A con, for me, is a chance to leave town, immerse myself in a completely new environment for several days, and meet friends I only ever chat with online. When I heard there was going to be a brand new Comic Con Honolulu right down the street of my house I was hesitant because it lacks all the aspects that usually appeal to me about going to a convention. If I walk to the end of my driveway I can see the con center, so the only travel involved was a brisk morning hike. Furthermore, we are rather isolated out here adrift on this rock in the Pacific, so everywhere I turned I was bumping into people I knew.  I can see these people pretty much any time I want to.

Despite the drastic differences, this convention turned out to be quite an amazing experience for me.  Though the final numbers for con attendance is in the 5,200 range, it never felt like there were more than 500 people roaming around at any one time. The size, guest list, and convenience actually ended up working in the convention’s favor.  I never felt rushed or crowded, like I do at the geek mecca in San Diego.  Hawaii itself is a laid back atmosphere and the con was much the same.  It felt like we were all just hanging out together, enjoying each other’s company, and meeting some kicking rad guests in the process.  The dates for next year have already been announced and, thankfully, it doesn’t conflict with San Diego Comic-Con so there’s no way in hell that I’ll skip it.  It was way too fun.

FRIDAY- The Day of Social Gatherings 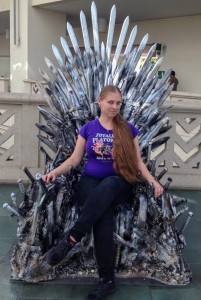 As I’d already used up an enormous amount of time off for San Diego Comic-con, I had to work at my day job on the first day of the con. Immediately after I dashed over to the con center to get the lay of the land. The entire convention fit on the top floor (the smallest floor) of the Hawaii Convention Center. There were three main rooms: the Main Events hall and Autographs in one, the Dealer’s room and Artist Alley in another, and the third housing both a panel room and every type of gaming you could imagine. It took me a grand total of ten minutes to learn where everything is.  At this point the small size of the convention began to trouble me, but that concern was short lived.

Once my exploration of the con center was complete I settled down on the panel room to listen to some local geeks postulate on whatever special geek thing they felt they were experts on. Five minutes into the panel I bumped into a friend (first on social media, then in real life… the rooms weren’t very big so it was easy to find each other) and was drafted into a game of Assassins Academy in the room next door. For four hours I dashed around the convention attempting to “assassinate” my target while avoid getting assassinated myself. I’ve never really played a game at a con before. I’ve always been a panels person, but it was clear this wasn’t a typical con for me and so I decided to throw myself head first into the experience.  It was a great time.

By the end of the night I’d been assassinated twice and recruited into the local LARP group (Dystopia Rising, I will be coming at you soon enough… as soon as I create a character). Whereas at most cons I’d probably have spent the entire day working panel rooms and press opportunities, I found myself instead with a swath of new social activities and potential new friends coming out the ears. This ain’t SDCC and, honestly, that’s part of the charm. 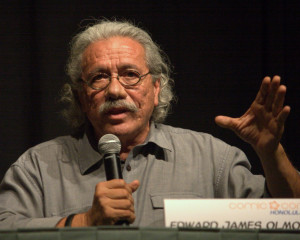 I go to conventions primarily for panels, interviews, and other potential news worthy celebrity encounters.  This was the day that was packed full of all of that. In the panel room there were mainly small local groups, such as the local Quidditch Team the Nitghtmarchers. The Main Event Hall, however, had some of the biggest name science fiction actors from the last decade. Edward James Olmos (Admiral Adama, Battlestar Galactica) was particularly inspiring. He’s one of the kindest actors I’ve ever met and I could sit and listen to him talk stories for hours. Even when we approached him for autographs he made the experience very personal and lengthy.  I was there mainly to morally support my friend, who doesn’t have much experience encountering celebrities, but Olmos made sure to pull me into the interactions and make the moment memorable.

Adam Baldwin (Jayne Cobb, Firefly) also had a panel and, while I have many misgivings about him on a political level (it’s hard to forgive inspiring the #GaterGate hashtag), his panel was everything that a Browncoat could ask for.  It had fun stories from the Firefly set and great banter with fans in the audience. At one point Sean Maher (Simon Tam, Firefly) walked through the audience and shouted “I love you Adam!” at the top of his lungs. It was unexpected, but an extremely exciting moment for all Browncoats present.  A moment like this would not have been possible at a giant convention, so I’m grateful this tiny con could provide this experience. 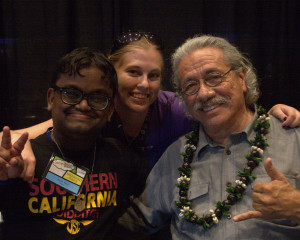 I also got to have a lengthy chat with Mira Furlan (Delenn, Babylon 5 and Danielle Rouseau, Lost), which I hope to have a separate article about up soon.  Delenn is my favorite character from my favorite science fiction show so having the opportunity to speak with her meant the world to me.

Every celebrity encounter felt very personal, laid back, and leisurely. I didn’t feel like I was being shaken down for money for ops or autos like I do at for profit conventions. The con is the perfect size for this sort of interaction and, for those of my friends who I heard complain about how small the con was, I’m really curious why you didn’t take advantage of that and create this incredible experiences.

SUNDAY- The Day of Air conditioning (aka Lots of Panels)

The final day of Comic Con Honolulu was basically my day to sit in one place and do nothing.  Let’s be real.  We live on a tropical island.  It’s hot and muggy.  For two days I’d wandered around the con and tried to do everything possible, but to close out the con everything I was going to do was in one place: the Main Event Hall.

The first panel I saw didn’t have a big name guest, but was still extremely interesting and had a surprise spoiler drop.  An artist for the History and Lore of Westeros special feature on the Game of Thrones BluRays took us through the process of drawing the artwork.  At one point she began to talk about something on the season 5 BluRay that hints at a possible feature film to close out the show.  Her commentary was quickly silenced by her speaking partner, but it was nonetheless an interesting tidbit about how the show runners could tackle the conclusion of the epic series.

Up next was J August Richards, who played Gunn on Angel and currently plays Deathlok on Agents of SHIELD.  It was during this panel that I realized the appeal of having a convention in such a unique location.  Everyone recommended food or activities for him to do while he was here and he was happy to tell us how much he loves our state and visits it frequently.  He called the audience a “human Yelp!” and pretty much planned his entire vacation around recommendations from the audience.  If the man loves it here so much, he should consider joining the cast of Hawaii 5-0 after his time on SHIELD is over.  Alas, one of the things he said during the panel was how big of a comic book fan he was and how much being part of the MCU felt like a dream come true.  I don’t see him walking away from such an amazing role any time soon, but still… we’re always happy to welcome you to to our islands, sir. Come back any time.
After his panel was the incredible Mira Furlan, but I hope to have an article about our interview up soon so I’ll keep it brief.  One of the biggest themes of her panel was how amazed she is at the staying power of Babylon 5.  For the past 23 years she’s been meeting fans of the show and learning about fandom culture through us.  It always feels good when an actor truly appreciates their fans, and I feel like she loves us from the bottom of her heart.  When I spoke to her privately about if she’d ever take part in a reboot, she said yes without any hesitance.  Even more incredible still, she’s working on a project with former B5 actor Bruce Boxleitner called Lantern City.  You have my attention, guys.  I’m here for this. 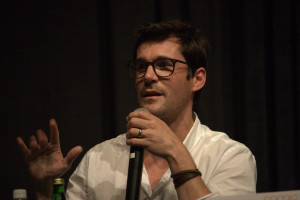 The last panel of the day was Sean Maher, who was delightful and personable. Adam Baldwin got his revenge for Maher’s previous panel crash in the middle of his panel.  Maher was discussing how it’s easy for him to play a character who is initially quiet and polite, but then an “asshole” later because it’s sort of how he is.  Adam Baldwin then shouted from the back of the room “that’s true!”  Sweet sweet revenge.  If there’s going to be trolling at panels, at least it’s good natured ribbing between actors who’ve known each other for over a decade.  I wouldn’t have it any other way.

At one point during his panel a fan said that he’d once seen Summer Glau in Waikiki, but was afraid to introduce himself because she was probably busy.  Maher said that, on behalf of the entire cast of Firefly, to never hesitate to come up and say hello to them.  They are incredibly invested in the fandom and he made it very clear that they were happy to make time to interact with Firefly fans.  So do you hear that, Browncoats?  Say hello to your favorite and don’t be scared.  They want to talk to you.  We’re family.

This convention may be small, but it’s got moxie.  For a first year con, they landed some incredible guests and created an environment where all fans could have meaningful interactions with the top talent.  This is so rare that I’m truly blown away that they were able to accomplish this.  While I am speaking incredibly highly of the con and want to see it grow, a part of me wishes it’d remain strong so this intimate setting doesn’t change.  But alas, conventions need to grow to be sustainable so chances are high that these special moments may decrease as the years role on.  But I’ll be there as it grows.  There’s something special here and I want to see it succeed.