For a long time, Kawaii Kon was the only geek convention on the island of Oahu.  Though the convention is anime focused, it attracted geeks from all backgrounds as it was the only game in town.  This year we got not one, but two first year “Comic Cons” aimed at other subsections of Geekdom.  The first convention of the pair was back in July. Comic Con Honolulu is a small convention started by the same group of locals that runs Kawaii Kon, but has a much more general genre focus.  The second is Amazing Hawaii Comic Con, which is a national convention company that runs similar cons in several cities through the US.  While there are always exceptions to the rule, locally-run small-scale conventions tend to be better at some things than the national conventions and, likewise, the national conventions have a leg up over the smaller local cons in a lot of areas.

With that in mind, I want to break down these two “first” Comic Cons bit by bit not only for the local Hawaii crowd, but to highlight some of the common differences between smaller local cons and larger national cons as a whole.  As I said, there are always exceptions to the rules, but sometimes the way a convention is structured behind the scenes can lead to some pretty typical outcomes on the front end experience.

*National Convention: AHCC
The national convention won this competition hands down.  With the huge budget and networking abilities of a national convention, they were able to pull in not only a large group of local vendors and artists, but people from the mainland as well.  We got some incredible artists that travel the world selling their work and exhibitors selling pretty much everything geeky that you could imagine.  It was a geek merchandise lovers paradise.

Local Convention: CCHNL
There weren’t as many booths at Comic Con Honolulu.  As someone who doesn’t shop much, this didn’t bother me personally.  However, I do know this is a huge part of the convention experience for some, so while it didn’t play into my own experience I just can’t in good conscience give them this point.  Sorry, guys.  Despite this factor not mattering much to me, it matters to a lot of people and the selection was quite weak.

National Convention: AHCC
You would think that a national convention would have the organization down better, but not so this time around.  This may not be indicative of other national conventions, but in this case the staff seemed overwhelmed and disorganized much of the time.  For the Stan Lee panel, the volunteer in charge of us kept saying she would “be back in a few minutes” to deal with our concerns (line jumpers arriving 20 minutes before the panel and jumping in line with the VIPs, despite having only general admission wristbands), but she never came back and frequently brushed us off when we attempted to get her attention.  Those of us who had waited in line for four hours got seats further back than general admission attendees who arrived only 20 minutes before because they chose to cheat when nobody was looking.  Us honest folk who waited it out in the general admission line ended up suffering for it.

*Local Convention: CCHNL
Perhaps this is entirely due to the size difference, but I never once felt like the volunteers for this convention were overwhelmed, confused, or dismissive of the attendees.   I knew exactly where everything was as it was all printed clearly on the print out (unlike AHCC, which only printed out the exhibit hall and artist alley map on the brochure).  Whenever I needed help with something, there was always a cheerful staff member nearby to assist and I ended up making friends with several of them by the end of the convention. 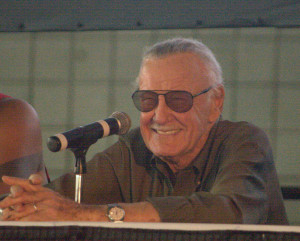 *National Convention: AHCC
Stan Lee was there.  End of argument.

*Local Convention: CCHNL
Okay, so while the national convention pulled Stan Lee, this small local convention got some of the biggest names in science fiction genre TV, so I’m going to have to split the point here.  As someone who prefers science fiction TV to actual comics, I enjoyed these guests way more, but putting aside personal preference of being able to talk with members of the cast of Babylon 5, Battlestar Galactica, and Firefly, those who focus more on comics got equally big guests at the nationally-run convention, too.  I’d say both are on par with each other, even though they have slightly different focuses.

National Convention: AHCC
There was a general price of admission to this convention, but more expensive “VIP” passes of various kinds and tons of add-ons in the form of autographs and photo opportunities.  This is very par for the course for profit-driven national conventions.  The more you pay, the more of an experience you get.  As someone who tends to attend conventions on a shoestring of a budget, this isn’t really my preferred way of operating at cons.  I prefer those who are willing to put in the time and effort being able to reap the benefits of that dedication instead of those who have the largest income being able to buy their way to the front of the line.

*Local Convention: CCHNL
There was only one type of pass available and, while you could definitely purchase additional autograph and photo opportunities at the con, you were given much more time to interact with the talent and have a meaningful interaction.  With most corporate conventions, the autographs and photo opportunities are vastly oversold, which makes going through the experience feel like you’re just a number in line instead of an actual person who’s there to experience something meaningful with the celebrities they adore.  For this small-scale local con you could walk right up to the booth, chat with the guests, and make a wonderful memory whether you decided to drop cash on an autograph or photograph or not (and, let’s face it, the more you chat and get to know the guest, the more likely you are to buy more of their merchandise).  The best part of all?  All panels were first come, first served, so everyone had an equal chance at seeing their favorites regardless of their income.