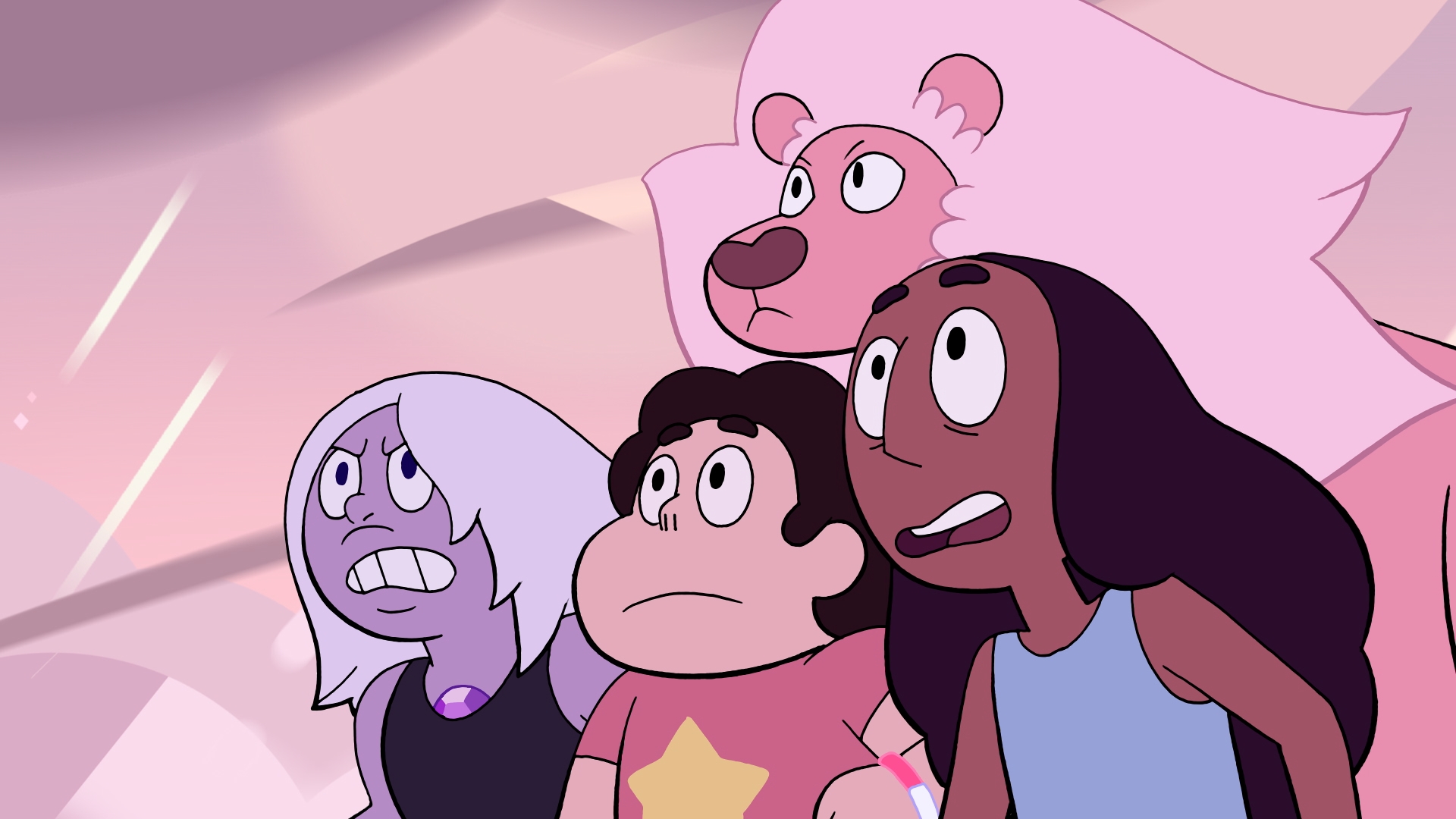 There have been so many good episodes in “Steven’s Summer Adventure”, and “Crack the Whip” was another winner. Like “Alone at Sea”, it wasn’t the happiest of episodes, but it packed a lot of punch. (Or…cracked a lot of whip?) 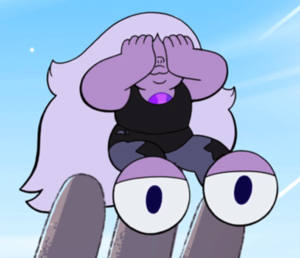 To be fair, I was a bit unsure about where “Crack the Whip” was going at first. Pearl and Garnet left to search for Jasper, and Pearl clearly wasn’t quite herself – she actually forgot about Connie’s sword lesson! Of course Connie understood, but it wasn’t very affirming when Pearl said, “We’ll train next week, without Jasper hanging over our heads,” and Garnet replied, “Best case scenario.”

Still, a good portion of “Crack the Whip” was all for fun. Even when Amethyst congratulated Steven and Connie on having the day off from training and they insisted on doing so anyway, that all wrapped up pretty quickly when Amethyst couldn’t pay attention and then told Connie – who was worried about her grip and stance – that you never know what’s going to happen in a fight and you just have to go with it. “How can you get ready when you don’t know what you’re getting ready for?” she asked. “You can’t.” Amethyst followed this up by explaining that fighting is about a feeling “deep in your guts”. 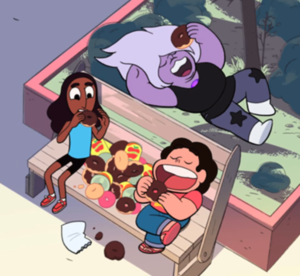 And speaking of gut feelings, Amethyst’s advice led to a snack break because you know…it’s Amethyst. And Steven *was* hungry. While I wasn’t too fond of Amethyst “transforming” into Lars to get free donuts, at least Steven apologized and he and Connie paid for…well, at least some of what they took. And then we got a great montage of them eating donuts and drinking soda and playing in Beach City – running up and down the Boardwalk with Amethyst as a cat and Lion trailing behind, riding the Ferris Wheel (seriously, Amethyst sitting on the top of the car while Lion rode placidly in the one behind her was nothing short of hilarious), and then swimming in the ocean. 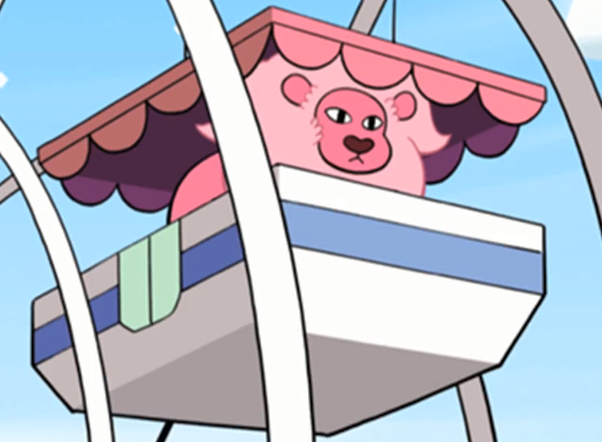 Or rather, Steven and Connie went swimming (in their clothes, because they don’t have swimsuits, but hey, you never know what’s going to happen in the heat of a battle!) and Amethyst went…surfing. Sort of. 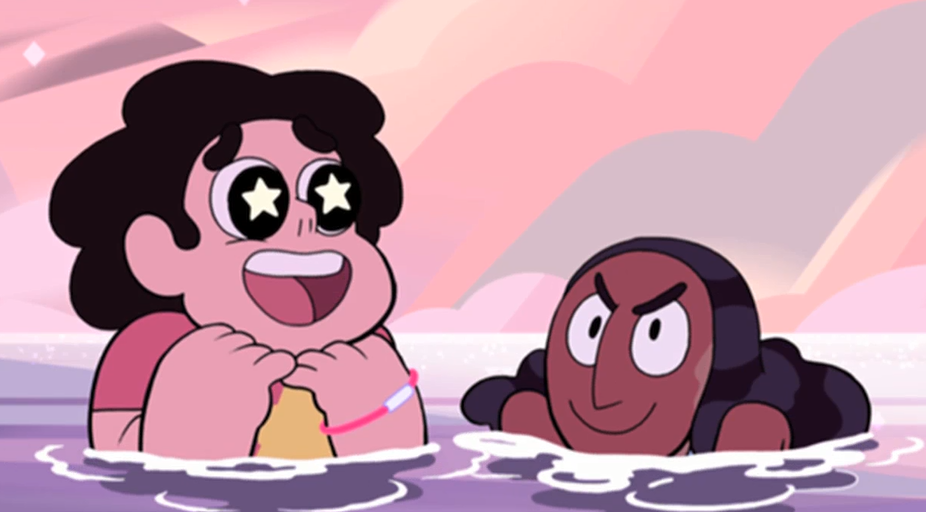 Unfortunately, the moment Steven and Connie started getting into a cute splashing ‘fight’ in “Crack the Whip”, one of the corrupted gem monsters showed up. Thankfully Amethyst immediately returned to take it down with her whip, but based on their experience in “Gem Hunt” Steven and Connie realized that the monster she defeated wasn’t the one they’d encountered. There were two monsters, and the next one rose up out of the ocean with Jasper on its back. 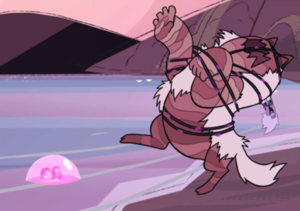 What followed was both depressing and amazing. Depressing because Amethyst insisted she could take Jasper out, while Jasper explained that Amethyst is a runt and claimed, “Fighting IS my life – it’s what I was made for! It’s what you were made for too…runt!” Jasper then proceeded to fight and eventually poof Amethyst – hence the depressing part of the episode. Thankfully Steven and Connie – who had been fighting the second monster along with Lion – ran to Amethyst’s aid, and in the process…they FUSED!

And so finally – finally – we got another amazing Stevonnie fusion! They were just as surprised as we viewers probably were that it happened (well, I was, anyway), but they took it in stride, even when Jasper exclaimed in disgust, “You Crystal Gems will even fuse with a human?!” Meanwhile Lion helped out by using its sonic roar on Jasper’s monster, and then Stevonnie RODE LION INTO BATTLE AND DEFEATED JASPER! Seriously, I still can’t get over how amazing that was. Maybe it’s my immense love for Lion speaking, but I don’t think that’s all it is. 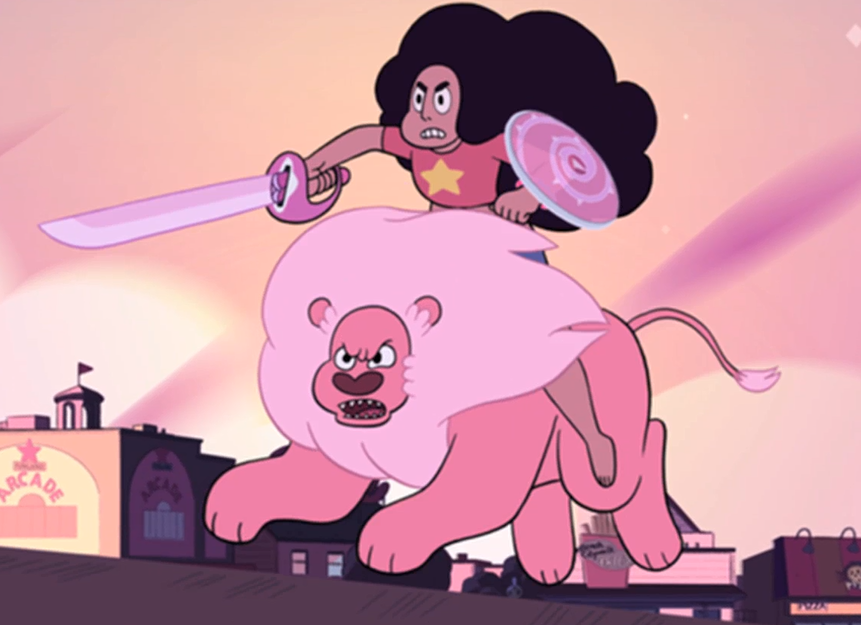 Jasper was of course even angrier at this point; she first yelled, “Fusion! Fusion! It’s always fusion!” and then as she disappeared into the water she insisted, “Jaspers don’t give up! Jaspers keep going until we get what we want!” 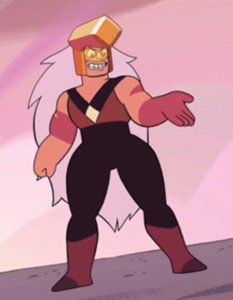 At this point poor Amethyst reformed, only to see that Steven and Connie had fused and defeated the enemy she couldn’t defeat herself. The kids were rightfully excited, ready to run and tell the other Crystal Gems all about their success, but even though they didn’t mean to, they left Amethyst in the lurch, so to speak. Her final line was “Oh! Good…you don’t need me at all.” This was heartbreaking on several levels, because while Amethyst may be a ‘runt’ compared to Jasper, as Rose said, she is perfect just the way she is. Even though she’s small, even though she’s flawed, she has a purpose, and the saddest thing about “Crack the Whip” is seeing her question not just her purpose, but her very being…especially when this was paired with Steven and Connie coming into their own.

Again, “Crack the Whip” was both exciting and depressing, but I overall, I loved the little tidbits that those eleven minutes delivered. We finally got to see Stevonnie fuse and fight; we’re witnessing some sad yet necessary character development for Amethyst; and we are learning more about Jasper’s plans (I mean, at least we now know that she’s trying to ‘tame’ the corrupted gem ‘monsters’).

What were your favorite moments in “Crack the Whip”? Do you like the direction that Steven Universe is taking with Amethyst? Let us know in the comments!