Crimson Peak Is A Delight For The Senses 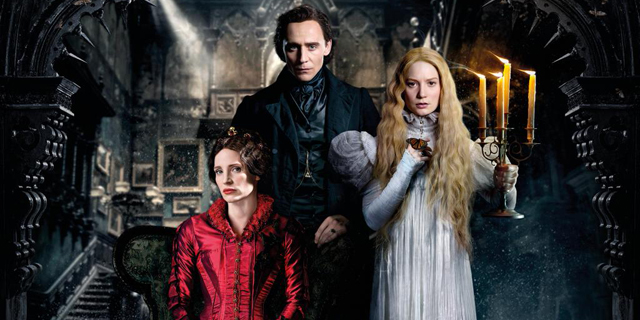 Every so often a film comes along that is an absolute delight for your senses, and Crimson Peak is one of the more artistic films that I have had the pleasure of seeing lately. Although there may have been a few elements I wasn’t entirely keen on, I loved this film! Everything about it made it one of the most fun gothic-style horror films that I have ever seen.

Let me be clear that even though Crimson Peak definitely belongs in the horror category, I did not find it scary. (In other words, I will not be up at night wondering if something is going to get me.) That’s good, because it really is a scary movie that has the potential to appeal to a very wide audience. And frankly, at its core, the film is about relationships and all of the crazy things we do to keep the ones we love. And love is a central theme throughout the film.

Crimson Peak starts out bright and airy, and that is where we meet our protagonist, Edith Cushing (Mia Wasikowska). Even though Wasikowska is petite, the presence and lilt that she brings to Edith is the best part of the film. Right away you are catapulted into the center of a gothic tale where everything holds a secret; the sets and costumes are over the top, and every scene seems just a little bit surreal. When I first started seeing the previews for this film and snippets from conventions, I was a bit concerned t 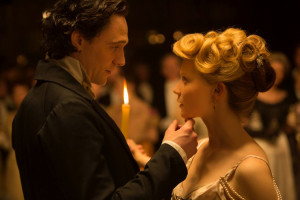 hat it would be overly stylized and that it would detract from the film. I am happy to say that for as grand as the styling is, the nuanced acting really pulls everything together and gives it a very realistic tone. It could easily become too campy, but director Guillermo del Toro does a great job of toning down his vision with subtlety by the cast.

Speaking of the cast, as mentioned before, Mia Wasikowska delivered the best performance in the film. She just had the right blend of innocence and hope that audiences want to root for. Tom Hiddleston plays Sir Thomas Sharpe who becomes Edith’s husband early in the film. Hiddleston was able to pull off a very complicated role in that he clearly loves Edith, but has secrets and reservations that are not readily known. He is one of the few contemporary actors that gives male characters a lot of depth, and he has the ability to make even the most mysterious characters seem sympathetic and layered. I will say that the one weak part of the cast, for me, was Jessica Chastain in the role of Lady Lucille Sharpe, Thomas’s sister. I normally like Chastain, but for Lucille, I found her performance lacking some depth. Lucille is a character that should command the screen and the audience, but I found her fairly one-dimensional. I found the other actors in the main supporting cast to be great, particularly Charlie Hunnam (who was incredibly charming) and Jim Beaver (who infused some much-needed humor).

Since this is a Guillermo del Toro film, I really need to spend some time talking about the style, design, and tone for the film, which was incredibly beautiful, but intense at the same time. The name “crimson peak” comes from the blood-red clay that Allerdale Hall (the Sharpe mansion) sits atop in England. Throughout the film, this clay is a character in itself, often oozing down the walls of the mansion or seeping through the snow. It was an interesting touch that I am glad was there; having it in every scene increased the tension, a required element of horror. And, of course, there were monsters. So many monsters. I didn’t find the visual effects to be overly terrifying, but they were well done, and added to that sense of unease; you never know when they are going to show up. And even though the style for the set designs and costuming was meant to be sharp and gothic, the interesting use of color and light kept the mood interesting where it could have gotten very dark very easily.

Overall, I really enjoyed this film. I had high expectations, but was preparing myself for the worst due to some of the hype surrounding it. Crimson Peak truly has all of the elements that I love in a horror film: great acting, humor, stunning visuals, and a solid story that makes sense and has purpose. I do recommend that you see it in the theater, though, because the visual impact is really that amazing, and it is truly a delight for the senses.