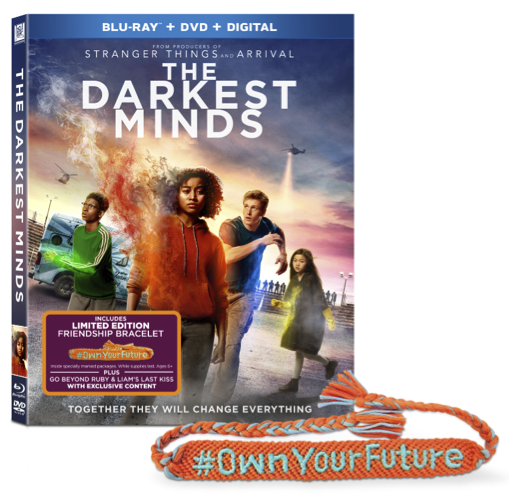 Based on a YA novel of the same name, The Darkest Minds takes us to a world where 98% of the kids are dead, there are children with superpowers, and a small resistance is fighting the government. The Darkest Minds Blu-ray has some extra content and a limited #OwnYourFuture Friendship Bracelet for fans to enjoy.

I was provided a free The Darkest Minds Blu-ray for review. The opinions are my own.

So, first of all, The Darkest Mind didn’t do well at the box office. It came across as another try from Hollywood to kickstart a new blockbuster YA live-action franchise. Many reviewers talked about how the film wasn’t anything original featuring beats already seen in the X-Men, Maze Runner, and Divergent series.

However, having said that (now don’t come at me), I kind of enjoyed watching The Darkest Minds. It definitely isn’t original, and the script could have been a lot better, but I found myself watching the entire film on Blu-ray without taking a break. Maybe I would have felt different if I had watched it in a theatre after paying for the ticket?

Anyway, what I’m trying to say is I think The Darkest Minds will likely find an audience through the currently available Blu-ray, DVD, and Digital releases.

Amandla Stenberg plays the lead character, Ruby Daly. Stenberg, who uses both ‘she’ and ‘they’ pronouns, is a likable actress and I am looking forward to seeing how their career continues. Stenberg does a good job with the material she is given and it is unfortunate for everyone involved that the film didn’t work out.

The superpowered kids are categorized. The green ones are highly intelligent. The most dangerous are the orange ones. Of course, Ruby is an orange, but she is able to convince a doctor (by using her telepathic powers) to change her categorization to green because the orange kids are killed in the concentration camp. Mandy Moore plays Cate Connor, a doctor who helps Ruby escape. She groups up with other superpowers kids, one of them being Liam (Harris Dickinson), and they try to make their way to a refuge while being chased.

I do think many of the things could have been explained a bit more. I wanted to know more about the virus, how the powers worked, what the government wanted, etc. People behind The Darkest Minds should have focused on telling a strong stand-alone story instead of just using the first film to sow certain seeds and hoping the franchise would continue.

The Darkest Minds Blu-ray (courtesy of 20th Century Fox Home Entertainment) has your standard packaging. The front has the cover while the back has the movie’s description, some images, and a list of extra content. The video presentation is AVC encoded 1080p transfer in Widescreen 2.39:1. Everything comes across as quite clear. The outdoor scenes are gorgeous. You can easily make out tree leaves and the grass. The same goes for the details in Ruby’s sweater.

The audio is a DTS-HD Master Audio 7.1 track. I experienced no issues with hearing the dialogue or listening to the sound effects during action sequences.

The Darkest Minds Blu-ray release also comes with a limited #OwnYourFuture Friendship Bracelet. It is kind of cute and a good piece of merchandise for the fans of the franchise.

The Darkest Minds was able to gross just a bit more than $41.1 million at the global box office against a reported $34 million production budget. So, I’m not sure if a sequel will be made. However, if you are a fan of Stenberg and are in the mood to watch a movie with superpowered kids, I recommend picking up a copy.