Dear Geekiary: Should I Watch ‘Constantine’?

Dear Geekiary, I’ve been wanting to watch Constantine TV show for a while now. I read some of your reviews but saw there’s no bisexuality in it. Should I watch the show even if Constantine’s bisexuality isn’t shown? I remember something about him and a priest in one of the episodes? Or does the show ‘queer baits’ and I shouldn’t put myself through that? Or will things change in S2, if there is one? 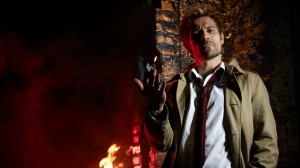 If you wanted to watch Constantine for a bisexual protagonist, then no, you shouldn’t watch Constantine. There was a moment where he was going to visit a male priest and he packed condoms, but it was largely played off as a joke instead of a serious nod to his bisexuality. They also teased that he’d “kiss a man,” but it turned out to be a platonic kiss on his friend’s cheek. The latter was definitely queerbaiting. Had they not teased it as actual recognition of his sexuality, I wouldn’t have categorized it as such.

Should you watch Constantine for other reasons? That’s up to you. Personally there were other things about the show that rubbed me the wrong way, which you can read about in my article “5 Ways Constantine Went Wrong.” But the fanbase has rallied recently (note: they are winning our current poll), so it’s clear there are things a lot of other fans enjoy that I simply don’t. So make your own mind up on that one.

I don’t believe the show will be coming back for a second season. I have yet to find a show that didn’t get the back 9 ordered and still got a second shot. If it does, however, and Constantine’s sexuality gets addressed, then I have a bet to pay up: I’ll owe the production designer, Dave Blass, a beer at Comic-Con if that happens. I sort of hope I have to pay up because I really wanted this show to succeed. If it gets a second season and his sexuality is addressed, I feel that it will.