I’ve been following Diamond Select Toys for a while, because they feature awesome items from a lot of shows and comics I love.

But I was still surprised at a lot of what they had on display at C2E2 this past weekend; for instance, while I was interviewing Zach Oat, Diamond Select Toys’ Marketing Supervisor, I realized that they even have Star Wars on their list! Sadly, they are wrapping up their Star Wars list now that everything has changed hands, but they still have a fairly recent release – a gold-and-white R2 unit vinyl bank. And that was just one of many R2 unit vinyl banks they’ve created – their first was R2D2, of course, but they also offered a special black unit at Star Wars Celebration last year, as well as a red one for Comic Con. 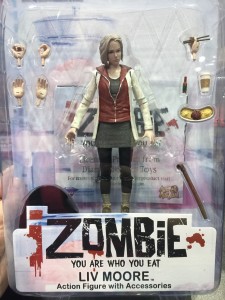 I had already known about their iZombie action figures, and Zach told me that iZombie and Gotham are relatively new properties for Diamond Select Toys. They’ve been making items from Ghostbusters, Star Wars, Star Trek, and Marvel for years, but he explained that “the general Warner Brothers Universe is fairly new to us…this is the first time we are working directly with Warner Brothers”, though they did offer some minimates for DC Collectibles “back in the day”.

Of course I had to know if Zach watched iZombie, and of course he does because it’s awesome. Diamond Select Toys even sent some of the Liv action figures to Rahul Kohli, who plays Ravi – the reason Zach says he’s watching the series. Rahul was kind enough to get one signed by Rose McIver, and I highly suggest checking out DST’s social media pages (Facebook, Twitter) for information on their giveaway that features this item!

When asked if there was anything new coming out that they hadn’t announced yet, Zach replied “We are currently doing development on a second set of iZombie figures. We are definitely doing a new version of Liv and a new outfit, but we are also doing secondary characters. We are doing a two-pack of Liv and Blaine just to kick things off and see how that turns out for the minimates.”

Diamond Select Toys already offers regular and full-on zombie mode Liv, plus the new figures coming out soon, despite the fact that “It’s tough when you do civilian characters…Even though Gotham is a very popular show, it doesn’t necessarily translate to ‘I need to own that police officer in his suit. It is understandable – you need to have a visual…to sell a three dimensional figure.” Thankfully, it’s fairly easy for them to produce iZombie variants, and for Gotham DST has already released six figures, and are working on three more – Barbara Kean, Victor Zsasz, and Bruce Wayne.

You can also find Diamond Select Toys booths at San Diego Comic Con and NYCC. Of course they’ll have convention exclusives at both, and for SDCC they usually carry about a dozen of them!

Of course mentioning other conventions led us into a conversation about how different they were, and one thing I mentioned was that while there are a lot of things to like about SDCC, it’s nowhere near one of my favorite conventions, whereas I was really enjoying my first time at C2E2. We were both surprised that DC wasn’t there this past weekend, especially as they were apparently at C2E2 the past couple of years, but I agreed with Zach when he said that C2e2 is “…very casual, outside the floor and on the floor.” It’s definitely a lot less hectic than the aforementioned conventions!

Some other new items to look forward to from Diamond Select Toys are more for the DC animated classic cartoons like the Batman animated series, Superman, Justice League, and more. They also launched a “very ambitious line” for classic Ghostbusters – fifteen figures from the first movie, and each one comes with a piece of a diorama base, so that once you’ve collected all fifteen figures you can build the entire diorama.

Seeing their Ghostbusters figures and diorama, I had to ask if they would be doing anything for the new movie being released later this year, and I was very happy to hear that there will be minimates, vinyl banks like the Star Wars ones we’d talked about earlier, and vehicles as well. They should even have action figures for Christmas! And last but not least, Zach mentioned that they were bringing back Star Trek and also had a new license for Alice Through the Looking Glass. 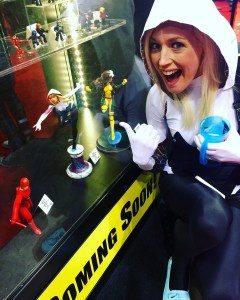 One of their display items that I was most excited about were the Spider-Gwen display figure (sculpted by Clayburn Moore, who is famous for sculpting women). This statue is seriously beautiful and I was probably almost a bit too excited to see it being displayed for the first time while I was in a Spider-Gwen costume.

Now, while I myself am not big on model kits (it may be something about all my pets walking across me and my things any time I’m trying to work, or the fact that I’m not the best with a paintbrush), I love that Diamond Select Toys has them for Thor *and* female Thor. They’ll also be offering Iron Man, Deadpool, and even some older ones that they’re bringing back, like the 60s and 70s style Hulk, Spider-Man, and Captain America, as well as a 90s-style Wolverine.

There was a lot of X-Files on display at the DST booth as well, so it was great to see the same reboot minimates in a display case and find out that I should soon be able to add an original series Smoking Man and Flukeman to the little display I have on my home workstation. 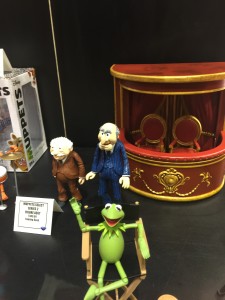 Another item I would love to display in my home is the upcoming package that includes Statler and Waldorf from The Muppets…along with their opera box! It’s going to run you just about $25 at your local comic shop, and they’re hoping to make it mountable. I can just imagine hanging it under my TV and wondering what snarky comments they would make about the shows and movies I watch!

My chat with Zach was enjoyable and informative, and as you can tell I’m definitely excited about a lot of their upcoming releases. If you like any of the characters or shows I’ve mentioned, definitely keep an eye out for Diamond Select Toys!