This past year has seen a lot of incredible television.  Some of the best new shows have women protagonists, which is remarkably refreshing given that the majority of the shows in existence tend to be led by men.  Even better, many of these shows have a diverse secondary cast as well, including LGBTQ+, POC, and disabled characters.  I’m all in favor of diversifying our TV choices, so I feel that it’s been an epically strong year for TV on this front.

For those who have similar interests in television, here are three stand out female-led shows I think you should try.  Not only do they have awesome women and a diverse secondary cast, but they’ve got incredibly entertaining plots as well. 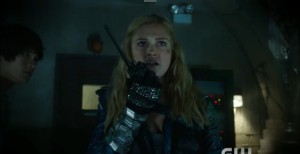 This show technically premiered in 2014, but the fandom seemed to be slow to wake up.  It wasn’t until late 2014/early 2015 that The 100 really started to become visible.  Like many other people, I initially dismissed this as a typical teen drama with some science fiction set dressing, but I’m happy to admit that I was way off the mark on this one.

The first few episodes hit some teen drama clichés, but it very quickly accelerates beyond that and presents this often dismissed age bracket as perfectly capable of taking care of themselves (and, later, even some adults).  The basic premise centers around survivors of a nuclear holocaust who escaped Earth in several space stations that were later joined together in what became known as The Ark.  Now, 97 years later, The Ark is slowly dying, so they decide to send 100 teenage prisoners (all adults accused of crimes are executed, so ALL prisoners on The Ark are teenagers) to Earth to test its survivability.  When the ship lands, we get some Lord of the Flies-esque power battles, which quickly gives way to Clarke emerging as a strong and capable leader.

Not only is the main protagonist, Clarke, an incredible woman, but she’s later revealed to be bisexual as well.  She’s portrayed as being a natural leader who is often forced to make hard decisions on behalf of her people.  She is also shown to be incredibly empathetic, though, and often affected deeply by some of the more difficult decisions that she is forced to make.  I am completely in awe of this character and how amazingly she’s been written and acted.  She shatters stereotypes for typical portrayals of teenage girls in the media and has made history as the first openly bisexual lead on American network TV (excluding ensemble casts).

The rest of the cast also includes several important POC characters, many other empowering women, and a prominent disabled character who gets several episodes focusing on how she deals with her sudden physical limitation.  The disabled character, Raven, is also a female mechanic with a natural inclination towards engineering, which adds ‘women in STEM fields’ to the ever increasing list of awesome traits portrayed by the main cast of the show.

All around, this is one of the most rewarding shows I’ve watched in a long time and I hope it lasts for many more seasons. 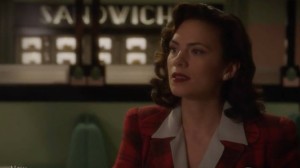 You can’t talk about badass female protagonists and not talk about Agent Carter.  She is probably the biggest badass of the year of any gender.  The show didn’t shy away from discussing sexism head on either, which further endeared me to the series.

While some of the sexism she faced can be attributed to the era the show takes place, much of it still rings true to the work environment today.  Perhaps things aren’t as overtly sexist as they were then, but that doesn’t mean it’s not still there.

One of the most appealing things about Agent Carter for me is that she doesn’t fall in line with either of the typical “badass woman” archetypes that are so prominent in media today.  Usually we get either an overly sexualized assassin type character or a tomboyish fighter.  She is neither.  She owns her femininity, but not treated as a femme fatale.  While both of those archetypes can be appealing in their own way (Arya from Game of Thrones is my favorite tomboyish badass out there, so I’m not dismissing their value), it’s nice to have something different here.

Like The 100, Agent Carter also has a very diverse supporting cast.  Peggy Carter lives in a hotel filled with women, which helps balance out her male dominated work place.  Having an environment such as this helps the show pass the Bechdel test frequently.

One of the primary protagonists is also an agent with the Black Widow project, which is group of soviet female assassins, adding even more female energy to the main cast.  This also leads to some interesting commentary about why they chose women as spies; they are often overlooked as non-threatening.  One of Carter’s coworkers is also disabled, which makes him the target of belittling comments from many of the other agents.  This often places both him and Carter at the bottom of the totem pole in the office, which is dominated by white, able-bodied men.  Overall there’s a lot of good commentary to dig through in practically every episode.

At this point the show hasn’t been picked up for another season, which is a supreme tragedy. 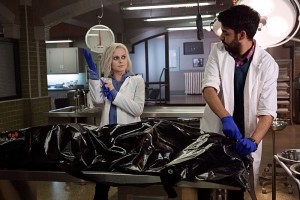 This show has only had one episode so far, so I may be jumping the gun, but so far I’m hooked.  The pilot hit all the right notes for me, and I can tell that Liv is going to be on of my favorite characters of the year.  Before being zombified, Liv was on the path to becoming a heart surgeon (yay for more women in STEM fields).  She gets talked into attending a party, which is where the zombie incident goes down, and then decides to alter her career path in order to literally feed her needs.  She becomes a coroner and feeds on the brains of the dead.  By doing this she is able to control her zombie desires, but also has the side effects of getting memory flashes from the deceased people she’s fed on.  She says she’s psychic as a cover for her unusual zombie powers, which I guess is slightly more believable than the actual truth, but still hilariously bizarre.  It’s like Veronica Mars (same show runner, by the way), meets Psych, meets In The Flesh.  If you liked any of those shows, you might like this one too.

As this show is incredibly new, I don’t really have much to say about it yet, but I see something truly special here.  It’s the spark of something great.  We’ll see if this lives up to my early high expectations.  I hope you guys decide to join me as we discover what this show has to offer together.