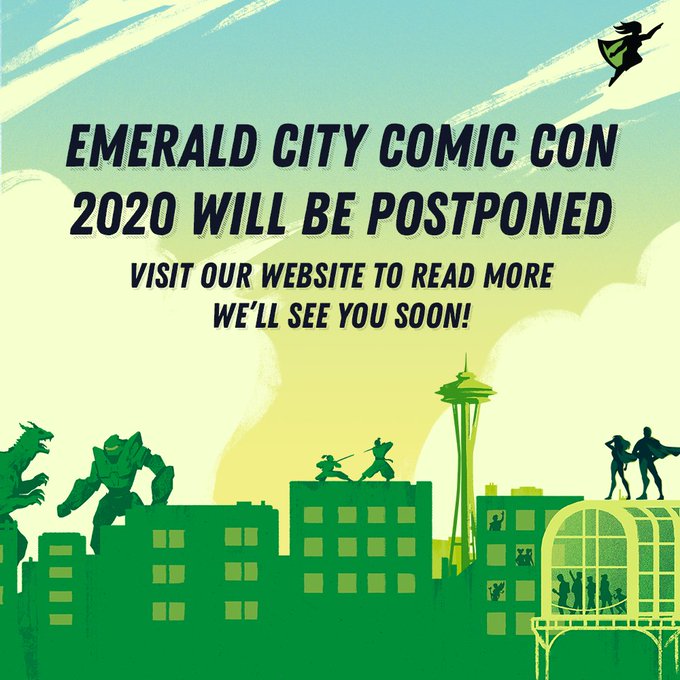 After a flood of cancellations, Emerald City Comic Con has been postponed due to the COVID-19 outbreak, which has hit Washington State particularly hard.

Emerald City Comic Con, also known as ECCC, was scheduled to take place March 14th-17th in Seattle, Washington.  The convention attracts almost 100,000 attendees each year and is one of the largest conventions on the west coast. We’ve been following the list of canceled guests since February 26th and speculating that the event would be canceled soon, and now we finally have an official announcement regarding the status of the con.

After many hours of conversation internally & consultation with local government officials and the tourism bureau, we have decided to move next week’s Emerald City Comic Con to Summer 2020 with date & detail announcement forthcoming. Read more at https://t.co/ahL1TOmHLF #ECCC2020 pic.twitter.com/qq3ZnDPXWb

Instead of outright canceling the convention, they’ve chosen to postpone it for an unspecified time this summer.  The summer is a busy season for cons so if it conflicts with any of the juggernauts like SDCC or Anime Expo, some fans could have a tough decision to make this year.  But I’m sure they’ll take those other cons into consideration when re-scheduling.  We’ll be keeping an eye out for more information.

They released a detailed statement on their website about their decision:

Each year the Emerald City Comic Con team works their hardest to do right by the thousands of fans that come together in Seattle. We want to create a space for you to gather, be yourselves and make memories with those who matter to you most. We have been closely monitoring the situation around the COVID-19 virus in Seattle, and, after many hours of conversation internally and consultation with local government officials and the tourism bureau, we have decided to move next week’s Emerald City Comic Con to Summer 2020 with date and detail announcement forthcoming. We did everything that we could to run the event as planned, but ultimately, we are following the guidance of the local public health officials indicating that conventions should now be postponed.

Our hearts go out to the entire Seattle community, everyone impacted by the COVID-19 virus, and all of you, the nearly 100,000 amazing human beings who look forward to this event each year. Our team was incredibly excited to see you at Emerald City Comic Con next week, however, fans, artists, exhibitors and the rest of the community are what make Reedpop events so special and it is our duty to make sure that your safety comes first.

We know that this decision is going to greatly impact many of our individual creators, small businesses and service workers. To those whose careers depend on ECCC – we will do everything that we can over the coming days and weeks to highlight your work and we ask that our entire community support you as we realize your personal livelihoods may be impacted.

To all of our fans – you will receive a refund on your tickets, no further action is needed on your part. Due to the volume, we expect you will receive your refund in 30 days. We appreciate your patience and understanding.

Reedpop remains determined and committed to running Emerald City Comic Con in 2020 and we are working closely with Visit Seattle and the Washington State Convention Center to secure alternate dates this summer. As we explore options for new dates, please know that our priority is to bring you an equally amazing event.

We appreciate all the messages that we have received over the course of the past week. The feedback was invaluable in helping us determine next steps.

Stay tuned to our website and social channels for additional information about when we will next see you in Seattle.

This decision is not at all surprising, and I applaud ReedPop for taking this step.  This marks the third Reed Exhibitions event we’ve been tracking that has had to pull the plug on their scheduled event, following both the London Book Fair and the Paris Livre Book Fair getting outright canceled just days ago.  Reed Exhibitions has been particularly determined to put on their events during this global health crisis, so I’m sure they didn’t come to this decision lightly.

Thank you for doing what’s right, ReedPop.  This was a good choice.  There are currently 75 confirmed cases in Washington State with 13 deaths.  These numbers are by far higher than any other state in the country.  The next closest state is California with 66 confirmed cases, but only one confirmed death as of this writing.

✨ECCC ARTIST ALLEY THREAD✨
hey all, here’s a list of artists who are still exhibiting at ECCC next week and where to find them at the con! a lot of them also have shop links so be sure to give those a look if you won’t be able to attend

This three-day virtual alternative to #ECCC is a QVC-style shopping network featuring artists, writers, and publishers who had to cancel their ECCC appearances. 1/6#eccconline #twittercomicon pic.twitter.com/TJLRuDCNkP

If you can help any of the artists or vendors that planned on attending the con by cruising the above Twitter threads and links, please do so.  Artists and vendors are the spirit of the convention circuit, and the postponement of Emerald City Comic Con could devastate the smaller artists or vendors who need these events to keep their businesses afloat.

Please also bookmark our Coronavirus Convention & Theme Park masterpost, where we will update with all of the news we write about in these articles for each con and theme park that we are tracking.

The next event I expect to have major news is SXSW, which is an event scheduled for March 13th-22nd in Austin, Texas.  If the pattern of a massive amount of guest cancellations followed by an official cancellation or postponement holds true, I expect news within the next couple of days.  Keep an eye out for more news.