Science fiction narratives typically reflect society’s concerns about the future. These are heavily influenced by the era that the piece of media is created in, and the common themes of the genre tend to shift as society’s fears change over time. The early 20th century had a strong focus on creatures from outer space invading our planet, often depicted in pulp fiction magazines, because we were frightened about what could lurk among the stars. As we advanced into space ourselves in the 60’s and 70’s, alien invasion pieces began to fall to the wayside, mostly replaced by themes that focus on the terrors we might find in deep space as we reach out farther than where we’ve already explored.  A prominent evolving theme worth noting that emerged in the 80’s and 90’s is the focus on a dystopian future here on earth. Some dystopian future narratives looked at things beyond our control affecting our environment or politically motivated societal collapse, but the growing focus on climate change marked a definite shift in the narratives being created. The 1990’s began to look at the devastation of our planet by our own environmental impact, most notably in the films Waterworld and The Day After Tomorrow. Despite the rather horrible self-destructive narratives about what we’ve done to our planet in those films, there was still hope that humanity could survive on the surface somehow. Lately, however, things have gotten a bit darker, focusing on our need to leave our own planet in order to continue our survival as a species. If science fiction is, in fact, a reflection of our inner fears about our own future, we’ve reached an extremely depressing state of mind. 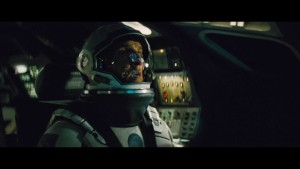 The emotional element of this film is what made me fall in love with it, but the commentary on our declining interest in space travel is what cemented this as an important narrative in science fiction history. It’s true that we’ve cancelled our space programs, and people generally don’t get as excited about rocket launches like they did just a few short decades ago. It’s also true that our planet is undergoing dramatic changes that could pose a threat to our survival as a species, even though there is a percentage of people who want to deny that climate change is a legitimate problem. Interstellar takes these two elements and links them in a frightening way. What if our lost interest in space means we stop advancing forward and can’t escape our dying planet? Have we doomed ourselves?

Thankfully in the world depicted in Interstellar, NASA has been working quietly out of the public eye to continue their missions into space and find a habitable planet for humanity to migrate to. Even when most people have not only lost interest in space travel, but actively try to hide what we’ve accomplished in space and pass it off as a conspiracy theory, our protagonists haven’t given up hope that we can find a future for humanity somewhere beyond our own planet. They know that humanity’s fate relies on continuing space exploration. Our survival relies on us reaching out and living among the stars.

This film rejuvenated my personal interest in space exploration. After watching it, I began to pay closer attention to rocket launches and mourn the loss of our shuttle program. Many other countries still have programs of their own, but this film really made me feel the loss of our own program and wonder how that’ll affect our future. Even though the film got some negative reviews for being a bit slow and long, I feel it’s going to be an important note in science fiction history simply for how it wove together two important themes into one cohesive narrative.  It was beautifully executed. 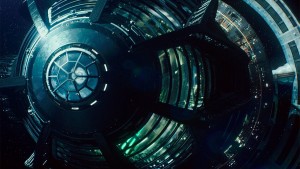 This SyFy series has a similar premise as Interstellar, with humanity launching a craft to find and colonize a distant planet.  An interesting element of Ascension is that the project was launched in 1963, before we ever actually launched our first manned mission into space. As previously mentioned, during this time most of our science fiction still reflected a deeply rooted fear of what we could meet in outer space. Yet we still recognized that in order for humanity to survive, we needed to get off the planet as soon as possible.  The premise is based off of an actual project idea under John F. Kennedy during the Cold War, out of concern that the war could lead to the destruction of humanity.  In the Ascension miniseries, a group of 600 men, women, and children board a ship on a century-long mission to colonize a planet orbiting Proxima Centauri.  Fifty one years into their mission, a young girl is murdered, causing an extremely tense situation onboard the ship.  The fallout from her murder reveals several surprising aspects of the mission that aren’t evident at first.

I’m going to have to warn for major spoilers in the following paragraph, because there’s a rather big twist that sets this show apart from the other two pieces of media in this article. Please skip to the next section if you wish to remain unspoiled. In Ascension it’s revealed that the ship never actually took off from Earth. Humanity recognized the need to leave the planet, but wasn’t quite ready to do so. The ship has been closely monitored in a warehouse by a crew of scientists as an experiment.  The exact reasons behind the experiment aren’t fully explored and the series hasn’t been picked up for future seasons to flesh out that aspect of the show, but this aspect does make it unique in the genre.  We can assume that it’s partly to monitor how a group of people would deal with such a mission from a psychological perspective, and perhaps other aspects as well. 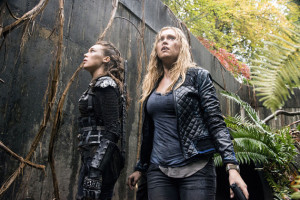 The cause of humanity’s exodus from earth on The 100 is a nuclear holocaust that poisoned the entire planet. A group of survivors launched into space and joined their stations together in what became known as ‘The Arc.’ Life on the Arc is threatened, though, as life support systems are rapidly failing. They send 100 criminal teenagers down to the surface to test the survivability of the planet.

This one is different than the other two science fiction narratives here for two reasons. First, humanity had no plans to permanently leave the planet, but rather wanted to leave it just long enough for it to fix itself through a natural process. Secondly, there is a strong emphasis on youth being the ones to make survival back on earth possible. The one hundred criminals sent to earth were all under 18 (anyone who committed a crime who was over 18 was executed immediately).  Even when adults enter the picture later in the series, the teens remain the driving force of humanity’s fight for survival.  The focus on young people’s part in humanity’s survival frames the show in a unique way.

Another notable aspect of this series is that, since they do return to earth, we get to see what happened to those who couldn’t leave the planet in time. There are several groups of people left behind. There are people who are referred to as ‘Grounders,’ who somehow managed to survive a nuclear irradiated landscape. Some of them have mutations, which are treated as poison in the gene pool.  The Grounders also put an emphasis on the young among them, often choosing teenagers and young adults to be their leaders.  Then there are the ‘Mountain Men’ who have holed up in a government base underground to wait out the nuclear holocaust happening above them.  Like the people on the Arc, the Mountain Men hoped to someday return to the surface after nature cleansed the planet of the nuclear poison that humanity caused.

Do any of these science fiction narratives accurately reflect what could happen to us? Most likely not completely, but they could hint at what our own priorities are as we move forward. I hope that we put a stronger emphasis on space exploration and that the potential damage to our planet gets taken more seriously. I would hope we don’t get to the terrifying prospect of having to leave our planet in order to survive. These narratives obviously depict an extreme Worst Case Scenario. But these thoughts are obviously in our collective subconscious right now and I hope that leads to good things for both the advancement of science and care for our environment.