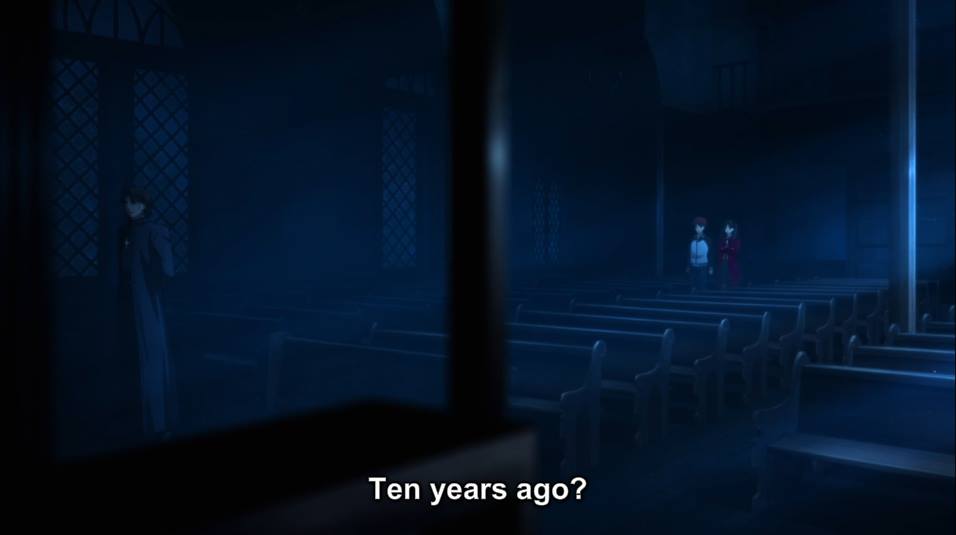 Well, I should admit right from the start, I goofed. In my attempt to avoid any and all spoilers for the upcoming season of Fate/Stay Night, I missed episode zero, titled Prologue. I use Crunchyroll, and had assumed it was just another preview since I’m unused to seeing shows use zero as their starting points, and there were already a few PV’s posted. Fortunately, missing it did not ruin my continuity as episode zero and episode one run simultaneously. Winter Days, A Fateful Night is simply from the point of view of another character and occasionally overlaps with the Prologue, both ending together, joining up the stories. The two episodes are roughly 48 minutes long.

The Prologue follows Rin Tohsaka, a wealthy high school girl from a line of powerful mages. Her first episode runs much the same as Shiro’s, introducing us to her daily life at school, and some of her friends. It’s hinted that she has particular feelings towards Sakura and Shiro, but it’s very unclear what they are. While Shiro’s episode tended to drag a bit during the first half, Rin’s got to the action much quicker. Early on we see her summon her servant, having prepared her whole life for the Holy Grail War. The next chunk of the episode is spent developing the new found relationship between her and her servant, Archer. At first he doubts her ability, but after she uses a command seal, we learn she is actually exceptionally 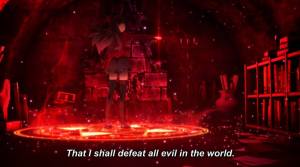 gifted, allowing Archer to draw more mana from his master. Now satisfied with her ability, Archer and Rin begin to learn that their ideals are rather in sync with each other’s and they are well suited to be partners in the upcoming war.

Like with episode one, the last half of episode zero is non stop action. This is where Shiro and Rin’s story lines begin to combine. What one observes, the other experiences, and they each get caught in the aftermath of the other’s battles. It ends with the same cliff hanger as episode one, with Shiro stopping Saber from attacking Rin, and each learning the other is a master.

Overall I’d say it was a much stronger opening than Winter Days, A Fateful Night. Rin comes across as especially likeable, not falling into typical lead female trope of either the soft spoken, moe, shy girl, or the unreasonably aggressive, emotional tsundre. In a genre filled with prepackaged character stereotypes, Rin comes across and incredibly normal. Sure, she’s confident, but that confidence is earned and not held over others, and while she is concerned for other’s well-being, we’re not given the impression that she’s some sort of idolized saint, whose innocence needs to be preserved. This is especially refreshing to me, and I look forward to her development. From what I understand, Unlimited Blade Work is largely her story, while the other two routes in the original Visual Novel, Fate, and Heaven’s Feel, focus mainly on Shiro, and Sakura, respectively. The ending of the episode also put in far more perspective to how important it was that Shiro stopped Saber from attacking Rin. In Shiro’s episode, it just looked as though he was stopping an escalating battle between Archer and Saber, however from Rin’s perspective, it becomes clear that Saber was very much about to finish Rin in the next blow. So while Rin saved Shiro’s life after he was attacked by Lancer, he now saved her life. 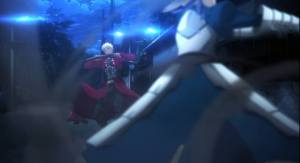 Another treat I noticed, was the use of the original score from Fate/Zero. So while Yuki Kajiura will not be returning this season, I’m glad some of the main theme’s will be carried over and adapted for use in the new series. Like with episode one, the action scenes were incredible. I’m really not sure how I’ll be able to review them going forward. I think it’ll just be me repeating myself constantly about how amazing it was, how I couldn’t believe animation was capable of looking like that, how jaw-dropping the choreography and cinematography was, and so on. I may have to head over to an online thesaurus more than once in the future.

Moving on to this past week’s episode, The Curtain Goes Up, I’m sad to say that it looks like my earlier prediction was correct. Episode two is nothing but one big info dump, with the only fresh air being that it was split up into two conversations. For those completely new to the franchise, I’m sure the information was indeed welcomed to the casual viewer, and I’ll admit, it even helped to clear up a thing or two I was stuck on from the previous series. The conversations kept me interested at first, but as I watched the minutes remaining slowly tick away, knowing we were now back to the regular twenty three minute episodes, my patience began to wane.

From this point on, it’s clear that the viewer is not meant to have knowledge from the Fate/Zero adaptation, and in the future, viewers should start with this series first and then watch Fate/Zero as it’s intended prequel. I find myself unable to speculate at this point because we’re looking at past information and it’ll take me too far into spoiler territory to do so. I plan to do my best to only speculate on the present storyline, ignoring the previous series.

There isn’t much more to say on the episode with out simply regurgitating the conversations in condensed form. Admittedly, the experience wasn’t horrible, I was mostly interested, and I can see why the information was needed. Everything continues to look great, but with no action, there’s not really anything to be impressed by. The most important thing The Curtain Goes Up accomplishes however, is establishing a motive for Shiro, giving him a purpose to fight. In many ways he was a victim of the last Holy Grail War, and he doesn’t want something similar to repeat. He very clearly has a strong sense of right and wrong, and in a war where it’s vary much kill or be killed to many of the players, he’s going to have to be placed in a morally compromising position at some point. Let’s hope the writer’s didn’t give him an easy out.

The episode ends on another cliff hanger, something I’m willing to bet will be the norm for this series. With episode three being titled, The First Battle, surely we can expect it’ll give us  more than enough action to make up for the lack of it in this one.

Fate/Stay Night is available for streaming via crunchyroll