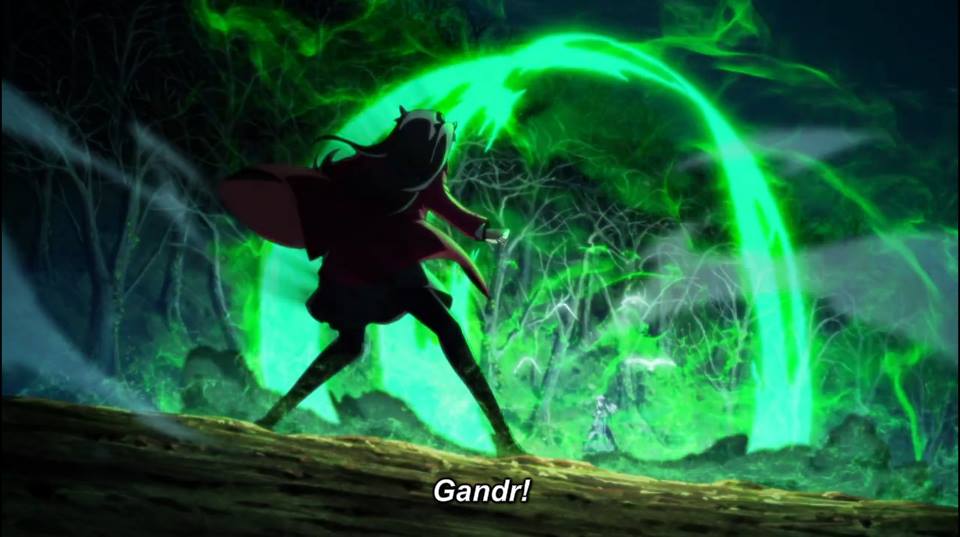 With episode two, The Curtain Goes Up, comprising of mainly two conversations, rich in backstory and explanations, I was looking forward to episode three, The First Battle, to really start the Holy Grail War proper, and that it did. Last episode ended with Shiro accepting his place as a master in the war while finding his resolve to fight. Just as he and Rin were about to part ways, a new challenger appeared. And so The First Battle is exactly what you would expect, twenty three minutes of nonstop action.

The action is, once again, top notch. Saber and Archer both display incredible skill and abilities while taking on the seemingly indestructible Berserker. 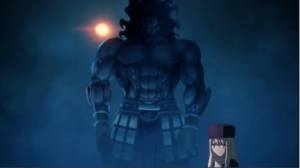 Rin also displays great talent as she fights Berserker’s master, Illyasviel von Einxbern, in a one on one mage battle. This is the first time we see just how high the competition will be during this war. Despite the fact that we’ve been told how powerful Rin is, Illyasviel dominates the battle, just as her servant, Berserker, dominates his.

Shiro, unfortunately, is fairly useless. His lack of magical ability puts him at a severe disadvantage. I suppose he’s supposed to fill in as the viewers avatar, but I can see it becoming very frustrating in the future, if he only manages to survive due to dumb luck, or some sort of deus ex machina. This is a war with competitors that have been training for it since birth. It is my hope that Shiro becomes a character that actually and believably deserves to come out on top. The infallible hero that only wins because he’s the “good guy” and has “will power” is a trope that is painfully common in shonen anime, and it’s actually the lack of this and complete moral ambiguity of the characters in Fate/Zero that puts it in my top recommendations list for any newcomers looking for a mature anime for adults. Of course, Shiro isn’t the only main character we have, Rin is still proving to be an awesome character and fully believable.

The fight took up the entirety of the episode. While if I was marathoning the series, I would not mind this, but at the end of twenty three minutes, having so little of the story move forward while knowing there’s a whole week to wait, was groan inducing. I can already tell that if given the choice, I would wait untill the series was complete before watching, as this week by week thing, is not for me. The most interesting part was seeing Archer’s Nobel Phantasm and even a hint at Saber’s. I’m not sure if this was a special ability unique to Shiro, or if it’s just a general mage thing, but his ability to sense what was coming did stand out to me. I hope that it is a hint that there’s a bit more to him than meets the eye.

The episode ends with Illyasviel and her servant walking away unharmed. Her reason to fight and then to back off is left ambiguous, leaving the episode feeling unresolved. Little is learned and with first Lancer and now Berserker backing off, it seems the mages are all still just testing the waters.

Episode four, Finding the will to fight, is much more of a mixed bag compared to what we’ve seen so far. Within twenty three minutes we get exposition, daily school life, domestic home life, action, and intrigue. This is the first time we finally feel like we’re into the story. We’re done with the introductions, no more going easy on anyone, we’re into this and I expect the plot to really pick up from here on out. Unfortunately, this is also the first episode that I have genuine complaints about.

The episode opens with Illyasviel taking a bath in a scene that could be considered lollicon fan service. As an anime lover, there’s a lot of things I’ve had to learn to just let go of if I want to enjoy a show, and unfortunately blinking at naked little girls with strategically placed hair is one of them. Of course, her character isn’t actually a child, but she still looks like one, and it’s a constant source of annoyance that so many shows feel the need to add these things, as though their story can’t hold the viewers attention on its own.

The second point of annoyance, and for me, the more glaring one, was the end scene with Archer. I know it’s a cultural thing, but the amount of casual sexism in anime really, really ticks me off at times. The assumption is made that, because a poison to destroy love was used, it must have been a woman, a particularly bitter one. When it comes to anime, this is hardly the most damning statement, but as a westerner, it’s just so jarring to hear something like that. Unlike fan service, it’s not something that can be explained away as helping to sell a product. I’m sure there will be plenty more instances like this, I have heard a thing or two about the visual novel this is based off, enough to keep my expectations low and hope to be pleasantly surprised, I just wish it didn’t have to be that way. 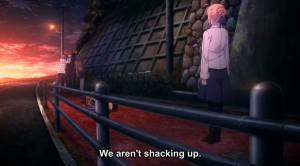 Unfortunately the rest of the episode comes across as pretty dull. The scenes depicting Shiro at school and then back home eating dinner, were uneventful. Aside from learning that he’s particularly gifted at archery and self healing, we’re subjected to him wandering around the school while his female friends freak out that there’s a new girl in his company, and that she’s staying at his home. While I’m starting to think the school, and people therein, will play a significant role in the future, it just feels wrong that if you find yourself in a life or death war which can and has destroyed cities, that you’re still worried about maintaining your day to day life. The priorities just seem a little off. The high point of the episode, and really, the series as a whole, is Rin continuing to be a complete badass and over all, great character.

Finding the Will to Fight is probably the weakest episode so far, we learned a few new interesting facts, but in a way that feels tedious, Shiro’s interactions at school were just annoying, and the lack of development with Sakura leaves you wondering why she’s even there. The end provided some much needed action, but Archer’s remark’s left a bitter taste in my mouth. I’m guessing we’ll be seeing Caster next episode and hopefully another battle. I certainly can’t wait to see Rin and Archer in action on their own this time and hope I she continues to impress me.

Previous:Sex, Murder, and Jesters Most Foul: Checking Out “Fool” by Christopher Moore