It came and went, Naruto fans; the final chapters of the manga were released to the world this week. I praised the two-part finale in my review. The most exciting chapter was the epilogue where the original cast members got kids of their own. Still, all good things must come to an end, but don’t worry Naruto fans, because Part 3 is just around the corner!

A complaint I have regarding the finale is the disappearance of major antagonists. Even after the time-skip there was no mention of Orochimaru, the major villain of Naruto Part 1. Kabuto wasn’t mentioned either. I was expecting to see at least one panel where Masashi Kishimoto explained what happened to the characters who served as villains in the series for years.

I liked the panels that showed the previous Kage’s talking with each other. All of them looked old except Tsunade who still kept her youthful appearance even though she was an old woman now.

Moving on to the kids (the new generation of ninjas) it was fun seeing the offspring of the main cast. With NaruHina becoming canon, Naruto Uzumaki and Hinata Hyuga gave birth to two kids, a son named Bolt or Boruto and a younger daughter named Himawari.

Both kids resemble their parents and I wonder which one of them got the Byakugan from Hinata. Bolt does come across as a copy of Naruto when he was a child: when Naruto was a kid he used to play pranks in order to get noticed by the village. In a similar sense Bolt played pranks to get attention from his father. The panel where he asked Naruto to help clean the mess his prank made 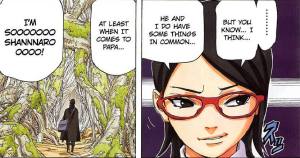 was quite emotional. I hope Bolt understands that his father is busy as the seventh Hokage and Naruto tries to spend more time with his little son.

The other major pairing in the series was Sasuke and Sakura who gave birth to a girl named Salada. Her name has already become a joke in the fandom. I was expecting Sasuke to have more than one kid to revive the Uchiha clan. Is it just me or does Salada look a lot like Karin Uzumaki? Maybe her resemblance is just a coincidence or maybe she actually is Karin’s and Sasuke’s child and not Sakura’s? That would give rise to a whole lot of drama in the already controversial Sakura and Sasuke romantic pairing.

Salada’s personality is similar to Bolt’s. I have a feeling those two are going to end up becoming a romantic couple and the Uchiha and Uzumaki bloodlines are going to merge. Just like Bolt, Salada is trying to find affection from her father, who is out on some journey. There was a panel where Sasuke felt someone looking at him when Salada remembered her father. Maybe those two share some sort of a deep connection? That would be an interesting power to have.

Other cast members also got kids of their own. Ino and Sai gave birth to a shy daughter. Shikamaru and Temari had a son, and Chouji became the proud father of a daughter with a big appetite. Lee also got a son and I wonder if he ended up marrying TenTen because she was seen minding her weapons shop and looking bored because of how peaceful things were in the world.

There are a lot of things that Kishimoto hasn’t explained. The Last: Naruto the Movie will help fill the blanks during the time-skip and there will be a treat for the fans next year. According to Anime News Network, Part 3 of Naruto will be released in spring 2015. It will be a mini-series focusing on the new generation of ninjas and will be part of Naruto’s New Era Opening Project.

The ending of Naruto felt a lot like the ending of Dragon Ball and Harry Potter, with the main cast having kids and moving on with their lives. With the new mini-series set to be released next year I’m looking forward to seeing my favorite ninjas again!

What are your thoughts about the Naruto finale? What do you think about the new generation of ninjas? Let us know!