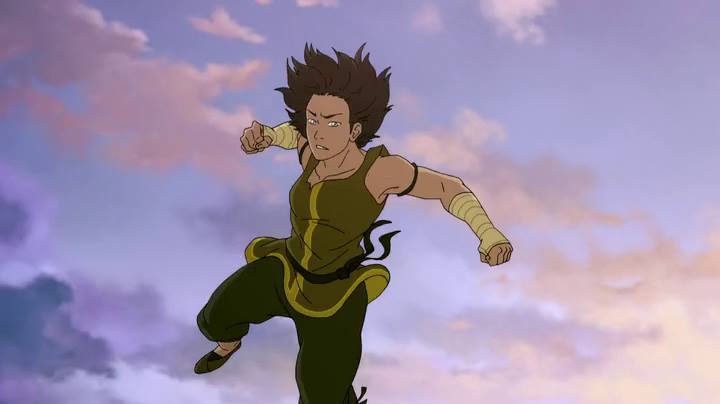 This week’s episode of The Legend of Korra Book 4: Balance was the most action-packed yet, and I loved every second of it. The writers did a good job keeping things tense during Korra’s fight with Kuvira as well as Varrick’s plan to blow himself up.

Ever since the premiere of Book 4: Balance I’ve been waiting for the fight between Korra and Kuvira. The young Avatar has never encountered a tough major female antagonist and the whole sequence was worth the wait. With Su’s surprise attack failing, the battle between the two strong female benders initiated. Kuvira was able to easily dodge and counter all of Korra’s attacks. The antagonist’s precision with her metal strips is very impressive and it’s a fighting style I haven’t seen before in the series.

Korra was able to do some damage in her Avatar State but she started seeing her spiritual self again and lost the battle. That’s when things got a bit confusing for me. I wasn’t expecting to see such a problem arise after Toph helped Korra take out the poison from her body. Maybe it happened because she felt unsure about what she was doing?

When the new book started I sided with Kuvira’s aim to bring peace to the Earth Kingdom. But then her true intentions started to show and she was revealed to be a tyrant. Korra doesn’t know about that and I think when Bolin finally gets to tell her about Kuvira being power hungry and creating a weapon of mass destruction, Korra will be able to fight her properly. The fact that Kuvira was going to kill Korra, the Avatar, made me hate her character even more.

Speaking of Bolin, his scenes with Varrick were the best. I’ve always liked their interactions. Bolin saving the mad scientist from the spirit vine bomb, and Varrick kissing Bolin on the forehead as a thank you made me ship those two so hard.

Varrick has clearly grown as a character and I liked how he started to miss his assistant, Zhu Li. Those two have a lot to talk about and if being away from her will make him appreciate the work she does for him, then so be it. I still believe that Zhu Li has a plan to take down Kuvira from the inside and help Varrick in the end.

With Kuvira defeating Korra in ‘Battle of Zaofu’ I’m really looking forward to seeing how the rest of the world leaders will handle the situation. It’s only a matter of time before Kuvira sets her eyes on taking over all the other nations. She has a huge army and Baatar Jr. is more than ready to build a weapon of mass destruction for his power hungry fiancé.

Best Bending Award: Even though Korra did her best, I have to give the award to Kuvira for executing some impressive metal bending moves during the fight.

What did you think of The Battle of Zaofu? Are you disappointed that Korra couldn’t beat Kuvira? Is anyone missing Mako? Let us know!

1 thought on “The Legend of Korra 4×6 Review: The Battle of Zaofu”