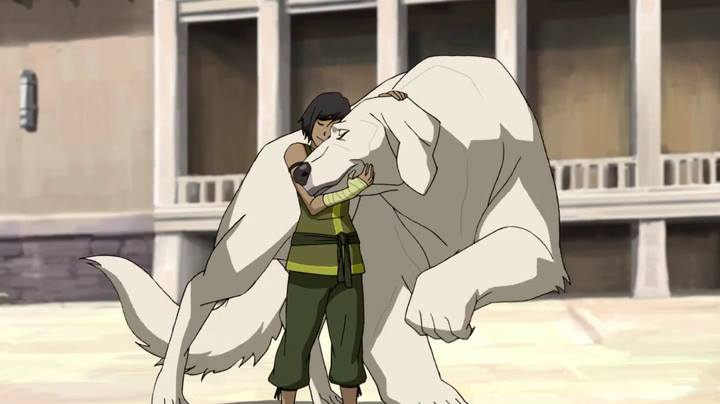 This week’s episode of The Legend of Korra Book 4: Balance was all about Korra reuniting with her former teammates and trying to work together after three years. The writers didn’t focus on Kuvira and I was glad they finally provided some much needed screen time to Team Korra.

“Reunion” showed Korra returning to Republic City. At first I thought the episode was going to be about the rest of the world leaders trying to decide what to do with Kuvira; however, the half-hour episode showed Korra going out to lunch with Mako, Asami, and Prince Wu. I was expecting to see Bolin join the gang in the end but that didn’t happen. I really want the whole Team Korra to reunite.

I liked how Korra blushed when Asami complimented her new hairstyle. Out of all the characters Korra could end up with, I believe that Asami is the perfect choice. The two girls feel comfortable when they are together and it was Asami who Korra wrote  to while recovering from her battle with Zaheer. Mako even asked Korra why she didn’t write back to him or Bolin and Korra’s answer was that she didn’t know why. Being someone who ships Korra and Asami, I bet you know my answer to that question. She wrote back to Asami because she’s in love with her!

This week wasn’t without its share of fight sequences. That’s what I like about this series. The writers are able to seamlessly add action, adventure, drama, and humor in every episode. While Korra, Asami, and Mako rescued Prince Wu from Kuvira’s

minions, Bolin and Varrick aided a group of fugitives escape from Kuvira’s army. Bolin’s interactions with Varrick were the best part of the episode. The eccentric scientist even helped the good guys by creating an electromagnetic pulse that fried the circuits of the powerful Mecha armor suits.

When Korra lost to Kuvira I had a feeling the antagonist will try to take over the rest of the nations. That’s exactly what she ended up doing. I was surprised to see some members of the Fire and Water bending nations being held prisoner by her. How long had she been doing that and why hadn’t anyone tried to stop her?

I liked how Tenzin told Korra she didn’t have to fight Kuvira alone. He was right. Kuvira’s army is too big and I don’t think Korra can take all of them at once even in the Avatar State. I expect the rest of the nations to build a united army in order to face Kuvira. I predicted seeing a World War before Book 4 even started airing.

With half of the book finished, I can’t wait to see what comes next. By the end of “Reunion” Kuvira entered the Spirit Swamp to harvest all of the spirit vines and I don’t think Toph will let her do that without putting up a fight.

Best Bending Award: I will have to give it to Bolin and his amazing lava bending moves during their escape from Kuvira’s forces.

What did you think of Reunion? Were you happy to see Korra meet her friends? Do you think Toph will come to Republic City and the previous Team Avatar will reunite as well? Let us know!

One thought on “The Legend of Korra 4×7 Review: Reunion”