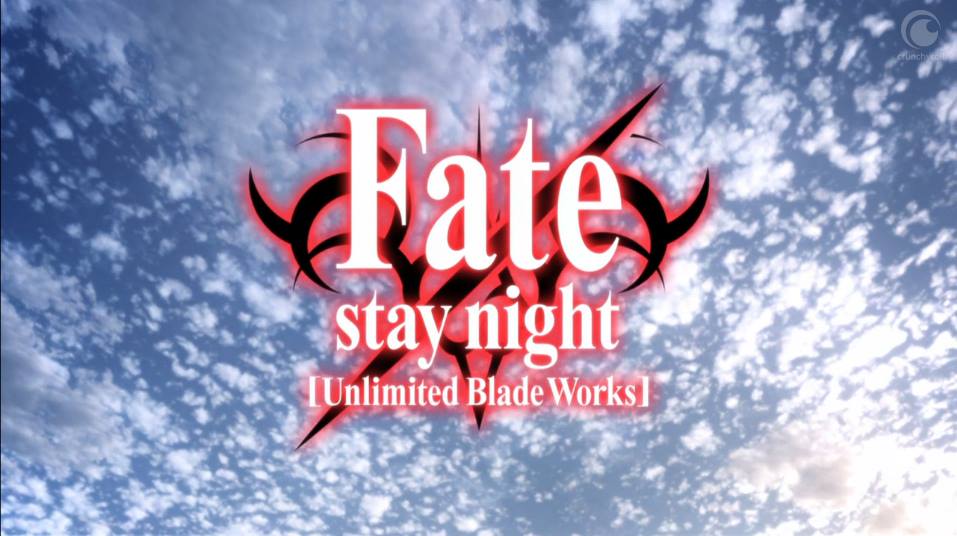 I have to start off with admitting that Fate/Stay Night has been my most anticipated show for over a year now. I say that not being overly familiar with Type-Moon or the Fate universe, Type-Moon created. Fate/Zero, it’s prequel, I have seen and regard as an anime masterpiece, so I’m largely basing my anticipation for Unlimited Blade Works upon that as well as general word of mouth from the fandom. Ufotable, the studio producing the show, pretty much set the bar for animation when Fate/Zero came out and are expected to continue being top in the field. Expectations for this show are incredibly high.

Fate/Stay Night is a popular visual novel, with Unlimited Blade Works being one of three story paths you could chose. Fate/Zero however, was a light novel, written as a prequel to the game, so I’m trying to temper my expectations with the fact that it is a completely different author’s work. That said, it hasn’t stopped the hype from those familiar with the story. I should say that another route from the visual novel, the Fate route, has been previously adapted by a different studio back in 2006, to mediocre reviews. Fans of the Fate franchise largely attribute that to the studio’s production being weak, as well as adapting the weakest storyline. I have not seen this version, so I can’t comment on it’s quality or lack thereof.

Right now, I’m not sure how familiar the viewers are supposed to be with the Fate universe, whether we’re expected to have seen Fate/Zero or not. Without going into detail, the general premise of the show is based around a battle between seven mages, fighting to win the Holy Grail which will grant them one wish. These mages must summon a champion to fight for them, based on a hero of legend or the past. They fall under one of seven classes; Saber, Lancer, Archer, Caster, Rider, Assassin, and Berserker. 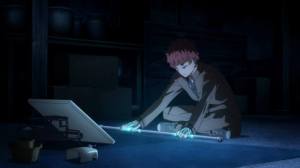 The opening episode is a surprising 48 minutes long, and fortunately we aren’t treated to a head drooping info dump that was the first hour of Fate/Zero. Instead we spend the first half of the episode being introduced to Shirou Emiya, a teenager whom we are constantly told does nothing but help people. He lives on his own, though his homeroom teacher constantly visits him, as well as a girl named Sakura, whom I guess he’s friends with. At first, I thought she was a roommate, as she’s introduced cooking for him, but apparently she lives elsewhere, so I’m not really sure what the relationship is there. We learn early on that he has some magic ability but little skill. It is also hinted that Sakura is a mage as well. The first half is admittedly slow, but it feels natural for establishing the world and Shirou’s daily life. I do wonder though, how much of the students we meet will turn out to be relevant. Quite a few show up in the opening but I can’t see them all getting involved in the Holy Grail War, except for getting in the way.

The second half really picks up with Shirou taking note of a number of strange occurrences, from strangers giving him cryptic messages, to brutal murders on the news. This leads smoothly into the last twenty minutes, which is almost nothing but pure action. Just like that, we are thrown right into the middle of the Holy Grail War and left trying to figure out what the heck is going on along with our protagonist, all the while gaping at the incredible visuals Ufotable is delivering for us. Saber, a female warrior, wielding an invisible sword, is accidentally summoned and introduced as Shirou’s servant. She appears just in time to defend Shirou from Lancer and a fight between the two servants quickly escalates. The action during this portion is incredible. I could not believe how fast and clear the movements were. It’s only the first episode and already I’m in awe as to what this studio is capable of. There is noticeable CGI, which I usually dislike, and was a pet peeve of mine during Fate/Zero, but so far it works, being used to show magic, which should have an element of the fantastic to it.

Though the episode ends on a cliff hanger, I expect the next will have the much dreaded exposition dump. Perhaps they learned from Fate/Zero and will find a way to work it in without being too obvious, or maybe skip it all together and leave the uninitiated viewer to work out the rules to this world themselves. I will be pleasantly surprised if the pace keeps up. Though the first half was slow, the second half easily made up for it, delivering a terrific fight scene, and a taste for the action to come.

One of my biggest disappointments regarding this series, was learning that Yuki Kajiura would not be returning to compose the score, a personal favourite of mine. I haven’t heard enough of Unlimited Blade Works to make a judgment on the score. So far there haven’t been any memorable pieces, but it’s still very early. The opening and ending themes though are fantastic. The opening in particular, Ideal White by Mashiro Ayano, I can’t wait to hear the full version of, which will be out later this week. The ending theme, Believe by Kalafina, does sound generic Kalafina, but I love them, so that’s okay! There’s nothing like a great opening to get you pumped for what’s to come.

Overall, Winter Days, A Fateful Night, lives up to the hype. The show looks gorgeous. The fight scene was amazing, and it’s only the first one. We don’t know much about the characters yet, Shirou is a pretty generic nice guy so far, but I expect a large, interesting cast to show up. My only worry is that since many of the characters in this show are teenagers, they may not live up the complexity we got from the mainly adult cast of Fate/Zero. I could of course be completely wrong on the front, and hope to be pleasantly surprised. We might just have the show of the year here, and after what felt like a mediocre spring and summer season, I’m excited for a hit.

Fate/Stay Night: Unlimited Blade Works can be streamed on Crunchyroll