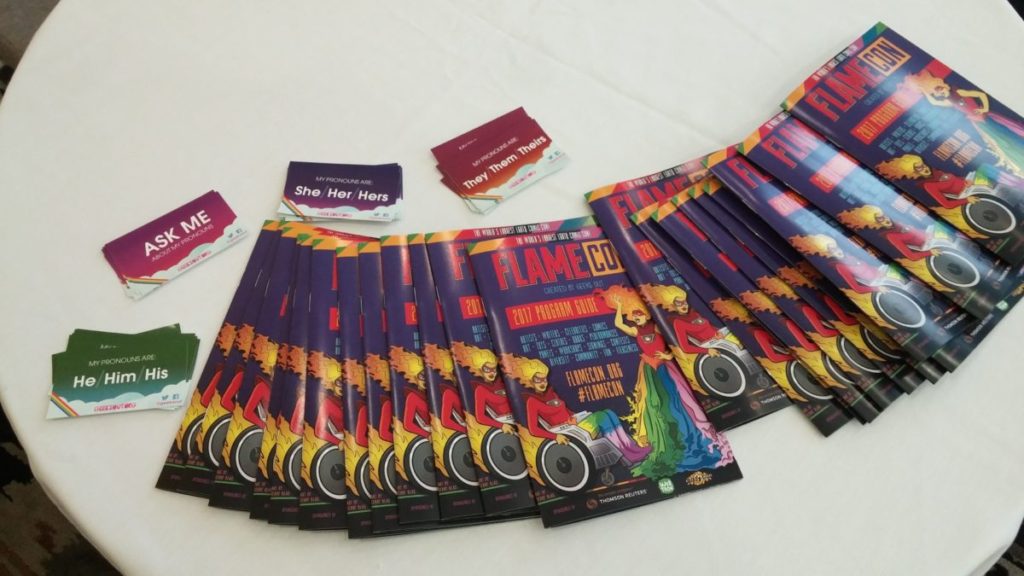 Flame Con 2017 was probably the most welcoming convention that I have ever been to. The world’s largest LGBTQ+ convention, which was once again held at the Brooklyn Bridge Marriott, was the safe space to end all safe spaces. Every part of the convention was designed to be as inclusive as possible.

Sponsored again this year by Geeks Out, Flame Con 2017 worked very hard to be a safe, welcoming space for everyone in the queer community. The check-in tables featured stickers displaying preferred pronouns, all the restrooms were gender neutral, and there was a quiet lounge off the show floor for anyone feeling overwhelmed. They carried over last year’s prop weapons ban, which was initiated in response to the Pulse shooting. Sunday was youth day, offering free admission to anyone under 20. Cecil Baldwin – of Welcome to Nightvale fame and a staple at this event – opened the show with a rousing group sing-a-long of 4 Non Blondes’ song “What’s Up?”, a song that’s experienced a resurgence thanks to its appearance in Sense8. 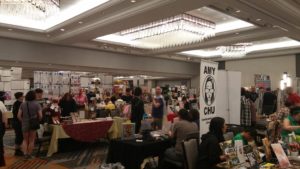 Guests included comic heavyweights like Sana Amanat (editor and co-creator of the new Ms. Marvel), artist and writer Phil Jimenez, and Steve Orlando (writer of the GLAAD-nominated series Midnighter and Midnighter and Apollo). Many LGBTQ+ indie comics were featured, such as Gamer Girl & Vixen and this girl’s favorite web comic Check, Please!, and a number of artists showed off their skills on a show floor that was so tempting I had to physically remove myself in order to stop spending money. Well-known authors like David Levithan and Soman Chainani sat on panels (the YA panel featuring Chainani, Adam Silvera, Alex London, and Mackenzi Lee was a hoot and a half) and held book signings.

Panels ranged from live podcast tapings (in the case of Spirits Queer History Podcast), anime discussions (“Discovering the Best New Yuri Manga and Anime” – check out our Twitter for some recommendations), and multiple panels on LGBTQ+ characters in media (like “LGBTQ Visibility in the Marvel Comics Universe”). Interactive workshops dealt with writing, cosplay, and activism. Dax Exclamationpoint (of RuPaul’s Drag Race fame) hosted a cosplay contest on the main stage on both Saturday and Sunday. NYC Gaymers sponsored a Gaymer Lounge that included Smash Brothers tournaments and instructional lessons on tabletop games like Settlers of Catan and Betrayal at House on the Hill. 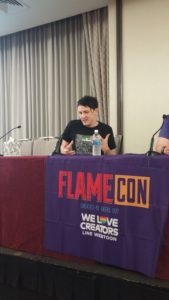 The biggest draw of Flame Con 2017 was undoubtedly Robin Lord Taylor, who plays Penguin on Gotham. This is Flame Con’s third year, and though previous years have featured some pretty famous names in books, comics, and podcasting, this was the first time a big Hollywood celebrity was a special guest. Robin was thrilled to be there, judging by his excitement at his spotlight panel, where he expressed disappointment that he hadn’t heard of the convention before. He talked all about Penguin’s sexuality, and how glad he was that it was him who got that storyline, because it allowed him to open up a larger dialogue. Robin also talked about how he was still growing and learning to be inclusive and aware of his own privilege.

In addition to a great panel, Robin held multiple signings and photo sessions throughout the weekend. There were professional photo ops, or during his autograph sessions you could get a picture taken with your own camera. He diligently chatted with everyone who came up to his table; he told my friend and I a story about being invited to Paul Reubens’ house for dinner. He was charming and lovely, and when he found out I would be attending NYCC in October, he told me I should come and say hi.

Everyone at Flame Con 2017 was super friendly. I had some great conversations with exhibitors and other attendees, and the staff was amazingly helpful. Everyone also seemed very happy to be there; one girl who was in front of me in line told me that this was her first convention. Another girl had come all the way from North Carolina just to meet Ngozi Ukazu (Check, Please!). Cosplayers of all body types strutted their stuff in outfits ranging from Rita Repulsa and Ursula to cat!Shiro and dads from Dream Daddy; there was no shame to be had in a place that revolved around being true to yourself.

If you’re LGBTQ+ and in the New York area, I highly recommend attending next year’s event. Even if you’re not in the New York area, you should come. As a smaller convention, it allowed for a more personal experience. Creators had more time to talk to fans because there were no massive lines to deal with, and even though the panel rooms were fairly small (the biggest of the three only seated about 120), they were never crowded. The only danger was an artist running out of prints (or, in my case, spending too much money)!

Keep an eye out for more from Flame Con 2017, including some giveaways and an interview with Ngozi Ukazu!

Previous:Welcome to the Ballroom 1×07 Review: The Tenpei Cup