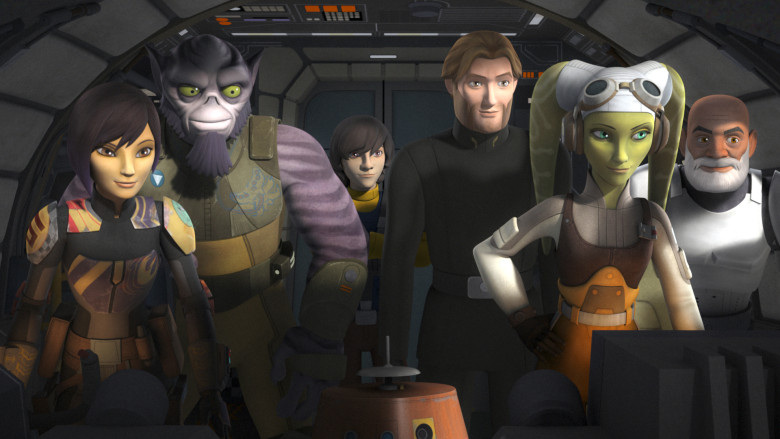 The Star Wars Rebels series finale, which included episodes “A Fool’s Hope” and “Family Reunion and Farewell”, kept me on the edge of my seat, broke my heart, and put it back together again.

I’ll admit, when Ryder called up Pryce in “A Fool’s Hope” claiming that he wanted to surrender and trade in his friends in return for amnesty, I hoped that it wasn’t true…and then I was fooled into thinking it probably was…and then I literally YELPED when I realized he had been faking it all along. And yeah, I had a moment of panic when Chopper seemed to have dropped to his doom, even though I know he had a cameo in Rogue One and couldn’t possibly be smashed to bits. After Kanan’s death, I was seriously worried that Rebels had reached the point where anything goes.

And here’s the thing – if that was the case, I would have been okay with it. It would have been upsetting, and I would have cried every time a character died, but I would have understood. Only that wasn’t the case; for all those gasp-out-loud moments I had (especially in “Family Reunion and Farewell”), in the end, well…everything turned out okay. 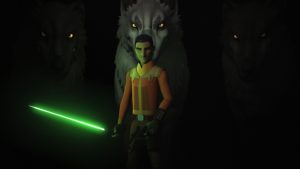 I think it’s a testament to the Star Wars Rebels writers – and of course Dave Filoni – that even with adding in some questionable plot points in the past, they were able to have it all come together in the end. Did I really foresee that the Loth-wolves would have such a huge part in the battle for Lothal, when previously they seemed to be more like the Bendu – willing to help the Rebels, but overall neutral? And I am so glad I was wrong about that, because they are good pups and I can’t express my love for them enough.

On the other hand, have I suddenly changed my mind about the sudden introduction of what is essentially time travel in last week’s episodes? Absolutely not, I still don’t care for it. And is that hyperspace/force whales episode still one of the worst in the series, even though they brought them back in the end? Yes, yes it is. But they clearly had a vision for Rebels, and in the end, they brought it all to fruition. 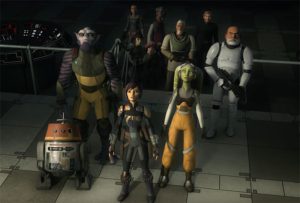 Yes, even those dang hyperspace/force whales. Who I understand are called Purrgil but if you’d told me back in season two that the episode about them would actually be important to the Rebels mythology as a whole, I would have side-eyed you at best and laughed in your face at worst. But hey, joke’s on me, though, because they saved the day in “Family Reunion and Farewell”…and apparently, in a way, saved Ezra, too.

But I digress. Because I really didn’t believe they did anything other than drag Ezra to his death, and yet the little afterword at the end of the series finale proved otherwise. Not only that, but Ahsoka was there too, showing up to help Sabine go searching for Ezra post-Battle of Endor.

Yeah, that’s right, the series gives us a post-Endor montage. Hera is still alive – and she has a son. Kanan’s son. ::CUE TEARS:: And as previously mentioned, Sabine is still alive, as is Ahsoka; Zeb and Kallus are still around, as well. (And AHHH how amazing was it when Zeb took out Rukh, huh???) 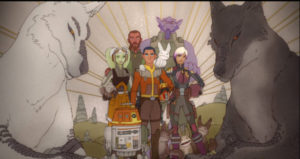 As for Ezra…well, he ‘met’ the Emperor (in holographic form, anyway) and was given the option to use the gateway to go back to a time when his parents were still alive. Maybe it’s just me, but I didn’t really believe that he would go back in time to be with his parents…especially after the opening scene in “Family Reunion and Farewell” when he talked about how Hera, Sabine, Zeb, etc. were his ‘new family’. That said, as much as I didn’t believe Ezra would take the bait and go back to his parents (if he even could? I still have my doubts about how that would work), I was still shocked that when he didn’t he was still able to best three pseudo-pre-Praetorian guards AND three Stormtroopers all at once, but that combined with the fact that he knew to call the Purrgil was, well, pretty bad ass…even if bringing in the Purrgil was a bit over-the-top in the deus ex machina department.

Granted, I suppose that above all Rebels stayed true to itself. Yes, we lost Kanan, but with the introduction of the whole time travel option, he’s really the only major hero who didn’t make it through the series. Yes, we lost the clone soldier Krieger, but shoot, even Hondo’s Ugnaught buddy Melch got shot but survived. Yes, Ezra was lost for a time, but it sounds like he might still be found; I guess the question is, does that mean that Thrawn will be found with him? I don’t know how I feel about that, considering that right ’til the end, Rebels!Thrawn was not the Thrawn I loved from the EU, or even the one I grudgingly respected from the new Thrawn novel.

Star Wars Rebels may be over, but its legacy will live on. Whether it’s through new books, cameos in future movies, or more…I trust where these Rebels have brought us. I fell in love with this series, and through the end, it not just earned that love, it deserved it. The only other thing I can say is LONG LIVE HERA AND CHOPPER!