We’re Getting More Free! And I’m Freaking Out 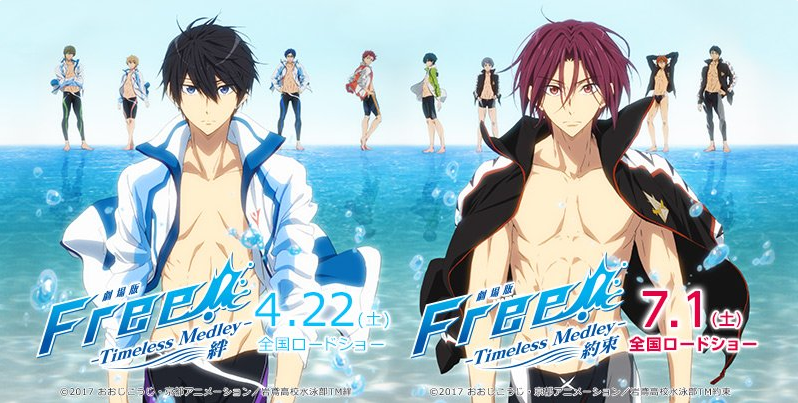 When I first fell down the sports anime rabbit hole, I absolutely fell in love with Free!, the swimming anime centering around the rivalry between childhood friends Haru and Rin. With only two seasons and a movie, I’ve been mourning the lack of new content for a while. But today I woke up to great news. We’re getting more Free!.

Today at an event in Tokyo for the theatrical film -High Speed- Free! Starting Days, which is based on the light novel that served as the basis for the anime, it was announced that there will be two compilation films released this year, as well as an all-new theatrical film. You guys. I am FREAKING OUT. These stupid swimmers hold a special place in my heart.

Free! Timeless Medley Kizuna (Bonds), which opens April 22 in Japan, will focus on the members of the Iwatobi Swim Club: Haru, Makoto, Nagisa, and Rei. Free! Timeless Medley Yakusoku (Promise) opens July 1 in Japan and centers around Rin and Sousuke (and presumably features the other members of the Samezuka Academy swim team). Both films will include new footage, and it looks like some familiar faces will make an appearance! The trailer for Timeless Medley Kizuna reveals glimpses of an older Ikuya and Asahi.

Free! Take Your Marks is being called a sequel to Timeless Medley, so in essence a sequel to the anime. It takes place during the spring of Haru and Makoto’s final year of high school, when they graduate. It will screen in theaters in Japan this fall, though no exact release date was given.

Meanwhile, a new novel version of the anime’s first season is set to ship in June. Written by original Free! script writer Masahiro Yokotani and art by franchise character designer Futoshi Nishiya, the novel will include bonus stories and artwork.

You guys. I am so excited about this; I’m literally shaking right now. Free! was my first anime obsession and I can’t wait for more content.

UPDATE 3/19/17 12:20pm: More information has been released, including promotional images!

Previous:Marvel Showcases “ResurrXion” Series with 90’s Animated Theme Song
Next: The Walking Dead 7×14 Review: The Other Side