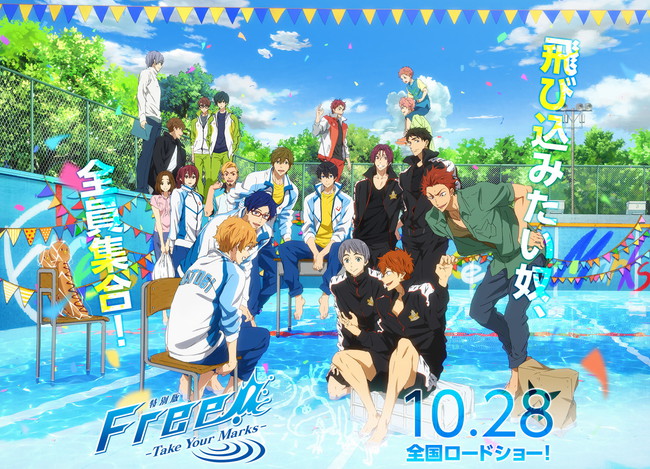 Released today, the Free! Take Your Marks trailer teased details about the four main plots of the upcoming film. Since I don’t speak Japanese, I understood none of them. Luckily, the internet is a beautiful thing.

As we previously reported, Take Your Marks is a film sequel to the Free! anime, which ran for two seasons and ended in 2014. Free! also got two compilation films – one focusing on Iwatobi, which premiered in April, and one focusing on Samezuka, which premiered in July – featuring some new footage. (I am not-so-patiently waiting for the subs to hit the internet.) Take Your Marks is a brand-new feature-length film which takes place in March of Haru, Makoto, and Rin’s senior year.

The Take Your Marks trailer, narrated by Coach Sasabe and Amakata-sensei, highlights each of the film’s four subplots:

#1 Unmei no Choice! (Fateful Choice!): Haruka visits Tokyo to look for a place to live for when he starts his college life there next month. Coach Sasabe recommended a real estate agent to Haruka, but when he arrives at the agent’s office, he meets an unexpected character.

#2 Hitō no Cooling Down! (Cooling Down at the Secret Hot Spring!): Aiichirō and Momotarō are considering what to give Rin and Sōsuke as a graduation present. As they try to think of something that might surprise Rin and Sōsuke, Momotarō wins a premium lottery.

#3 Kessoku no Butterfly! (United Butterfly!): Starting in April, the Iwatobi High School Swim Club will only have Rei, Nagisa, and Gou. In order to recruit new members to the club, the three try their hardest to create an invitation promotional video, but…

#4 Tabidachi no Eternal Blue! (The Eternal Blue of Journeys to Come!): The Iwatobi High School Swim Club members plan a surprise party to say goodbye to Rin before he goes to Australia. But Rin happens to see Gou and Momotarō as they run errands together all around town for the party.

If you need me, I’ll be over there in the corner crying about Haru and Makoto going house-hunting in Tokyo. (And my precious Natsuya!)

The best news is that all eight main cast members of Free! will return for Take Your Marks, including Yoshimasa Hosoya (Sousuke), who announced in April that he would be taking some doctor-mandated time off to undergo treatment for his throat. And if the promotional art can be believed, we’ll be seeing a lot of characters return.

Free! Take Your Marks opens in theaters in Japan on October 28th.