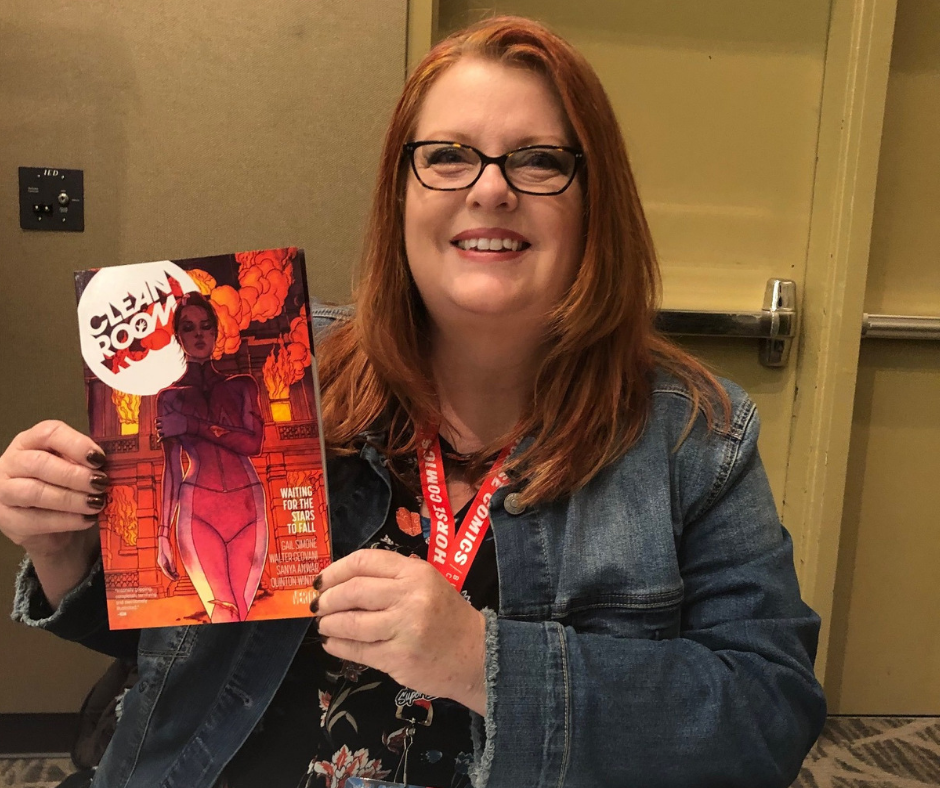 Gail Simone, iconic comic writer and Chief Architect of the Catalyst Prime Universe, took some time out of her packed Emerald City Comic Con schedule to answer a few questions for The Geekiary. We talked about Catalyst Prime, Domino, and what it would take for her to write an Olicity one-shot.

The Geekiary: You’re the Chief Architect for the Catalyst Prime Universe. How would you describe it to a reader who had never heard of it before?

Gail Simone: I would describe it as something that leans towards science fiction but is created from a very modern sensibility, so this universe feels very real. We have characters who are enhanced, and they became enhanced by being exposed to something from outer space. It affects different people differently.

So we have characters like an African American character named Noble who is just a family man, a dad. He has a wife and a son. He goes out and does heroic things to try and help the people in his city.

We have one of my favorites, Summit, who is a queer, female, Jewish woman of color. She’s an astronaut who went to try and save Earth from what was coming, and she fell back to Earth differently than she went up. I love her story.

Quincredible, by Rodney Barnes, is amazing. I think it’s one of the best new teen superheroes since Ms Marvel. He’s a young African American kid in New Orleans who has survived Hurricane Katrina and also survived the meteor shower. That was another natural disaster in New Orleans. He has the power of invulnerability – that’s it. He just can’t be hurt.

We’ve got Cosmosis, who is a hero with Down Syndrome. He goes out and does good deeds all the time to try and help people. The meteor affected him in a particular way.

I just think it’s amazing how we can tell these real-world modern stories, just with characters that have been enhanced.

What do you see as the biggest challenges for a young universe like the CPU?

Getting the word out. I think people, once they see what it is and read a great story, will want to read more. It’s just getting the word out when you’re new is the challenge, getting people to give it a try. It’s one of the things I’m most excited about that I’ve done in my career. As the Chief Architect, I’m overseeing the whole thing- editors and creators and everything. I’m reading everything. I’m creating some new characters for a new comic that’s coming out this summer to set up the premise of the universe.

Is there anything new fans need to read before picking it up?

No, absolutely not. This story, Seven Days, you can jump right in with both feet. I’m writing it as a welcome mat to new readers and a “welcome back” to readers who have already been in the Catalyst Prime Universe.

Basically, a superior being comes down to Earth and says, “All life forms on Earth are going to be annihilated. I’m taking this over, we’re terraforming, it’s going to be our new world. But you have 7 days to get yourself together-any last wishes you have, say your goodbyes, whatever you want to do. Seven days.”

So each issue is one day in that seven days.

When will that be coming out? 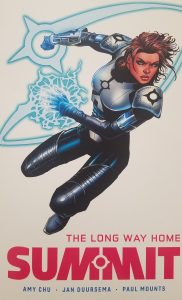 This is always a tough question for creators. Who’s your favorite CPU hero?

(Thinking for a moment) I think I’m going to say Summit, just because of the idea that we have a female astronaut that went to try and save earth and came back different. Now she has to figure out how to cope with her newfound abilities and keep her life together. Plus, it’s got a solid science base. It’s written by Amy Chu. [Summit is] just a fantastic character, I think she’s my favorite right now.

Moving on to some of your non-Catalyst Prime work, Domino was originally meant to be 3 issues but was expanded to 10 because it was awesome. As a writer, how much warning do you get about that and how do you roll with that kind of scope change?

[Laughs} In this case I didn’t get a ton of time or a head’s up with it, but it was okay because Domino is one of those characters where I feel like I could tell Domino stories forever. I was like, “Oh good, we get to do more, this is amazing!” Then when David [Baldeon, artist for Gail Simone’s Domino run] was down with it and had time in his schedule, too, that made it all the better.

Speaking of Domino, you said on Twitter that you wanted to write Domino and Spider-man fighting. What would they be fighting over?

[Playfully] I… don’t want to reveal that right now.

Spoilers, huh? How about this: would you take a gig writing a Godzilla comic series with almost complete autonomy if the contract required that you also write a schmoopy Olicity one shot?

Oh my god. [Laughs] I think a lot of people would be unhappy but I would be deliriously happy.

When you’re writing the Wal-mart Flash series, do you have to stay within current DC continuity or are those Wal-mart books their own thing?

If you could recommend three books by other authors for our readers to go add to their pull list, what would you suggest?

I would suggest Monstrous, and I think Summit. That’s an interesting book, I think there’s nothing else like it out there. I would tell people, especially if they haven’t read comics before, to try Saga.

What’s on your pull list? What books are you currently in love with?

I’m reading a lot of stuff for research right now, so I’m not up with everything current right now.

Other than your current creative teams, are there any artists you’d love to work with that you haven’t yet?

Probably anyone with the last name Kubert.

That narrows it down. [Laughs] Gail Simone, thank you for your time. Any last words for our readers?

Jump in with both feet into the comic world and you’ll find something you like, no matter if you like romance, horror, science fiction, superheroes… Comics has really widened the scope recently, so I guarantee there’ll be a comic for you.