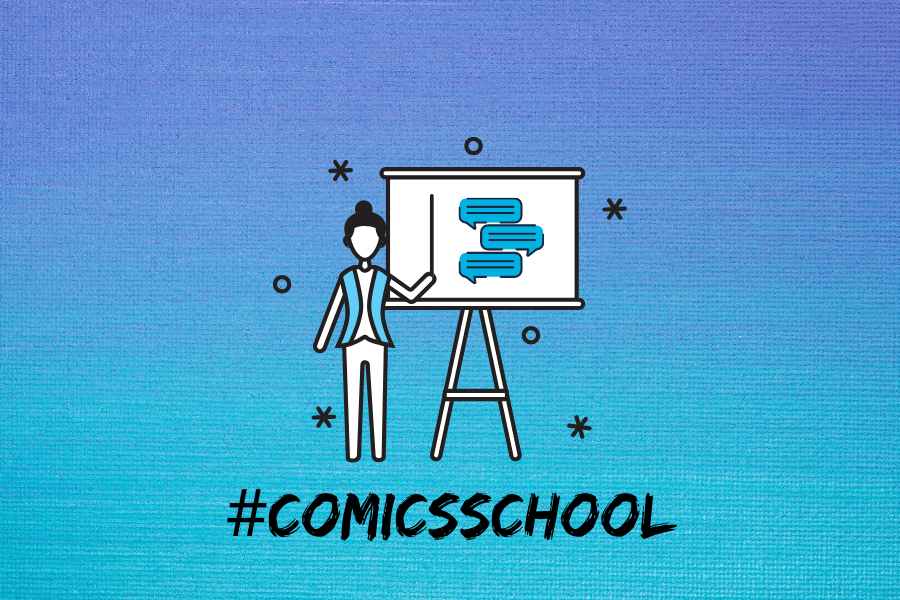 Disclaimer: This is obviously not an official graphic. We made it. This is a Twitter thing, you guys, there’s no press kit.

Looking for something fun to do while you avoid crowds? Gail Simone, comics icon and all-around entertaining human, has spontaneously decided to do a series of Twitter threads to help guide newbie writers through finishing a first draft. She’s calling it ComicsSchool, and the first thread is happening today.

If you follow Gail Simone on Twitter, you know that ComicsSchool isn’t the first time she’s offered advice or encouragement to aspiring writers. She’s known for handing out random but useful advice and being generally encouraging to people looking to break into comics. Her threads about the industry are always good reading.

This is something a little more structured. I’ve seen pros do advice threads, but I can’t remember seeing someone at her level spontaneously do an open, semi-structured mini comics course until I spotted this on her Twitter earlier:

For those of you who raised your hand…I’m going to try something. I don’t think anyone’s ever done it before. Certainly not on this scale.

If you’re interested in a craft experiment that will help you learn a LOT of important tools to making comics, check later today.

Go ahead and read the thread, but I’ll give you the tl;dr right fast. For the next five days, the ComicsSchool hashtag will present a set of thought exercises and advice that will help you create a 5-8 page comics script from scratch.

“There ARE people who have the dedication and cussedness to write a graphic novel and fund it and oversee it and get it printed as their first project. We DO NOT have to be that person. And many of THEM wish they had started smaller,” Simone said in her “orientation” thread. “One project, one idea, one executed story. That’s our goal. So your thesis at the end is going to be something manageable, something that can be accomplished. A five-eight page complete story.”

It’s aimed at newbies, but Simone says it’s open to anyone.

She does mean anyone, too. Gail Simone is a favorite target of Comicsgaters. She’s blocked oodles of them, but she made a point to say they can have someone request they be unblocked if they want to follow along.

As long as they behave themselves, that is. Simone has way more patience with shenanigans than I do but has said she’ll immediately block anyone spewing hate into the threads.

Here’s all you need to get started:

Also, have your cell phone near if you can, don’t worry, no one is calling anyone, it’s to make a point.#COMICSSCHOOL #DAYONE #ORIENTATION will start at 1:00 pm PST, 4:00 pm EST.

As you can see, the first thread has already been posted, so you can check it out on her Twitter. Future ones will reportedly be posted daily. If you get behind, just go to the ComicsSchool hashtag and catch up. It’s not time-sensitive, though she is doing a Q&A after sessions 2-5.

If you make it all the way through, feel free to link your creations in our comments or tag us. We’re dying to see what people make!