Game of Thrones 6×5 Review: The Door 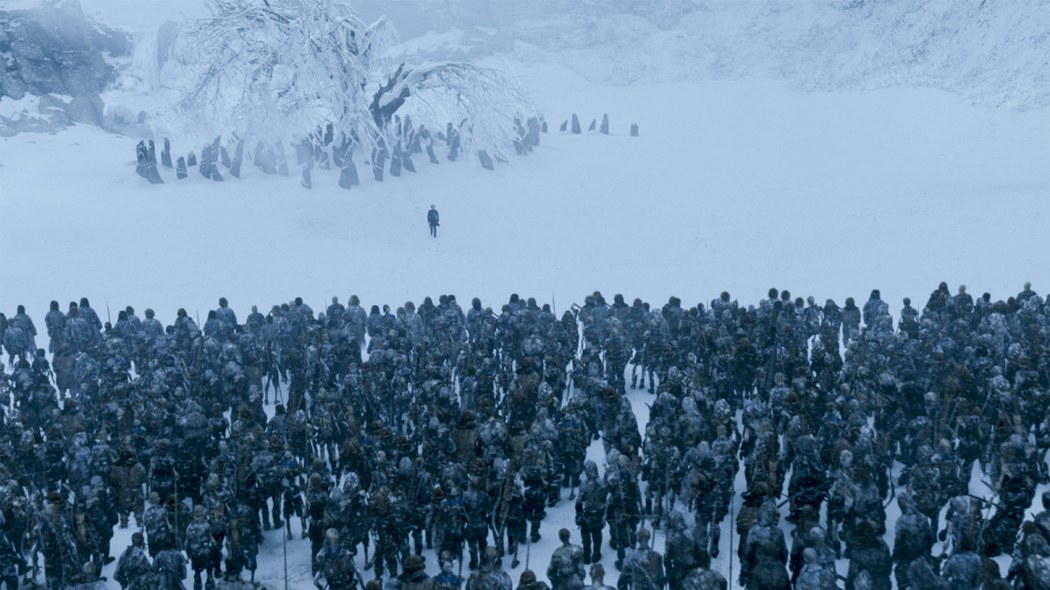 “The Door” wasn’t perfect, but it was certainly a tightly written episode where every single scene felt like it actually meant something to the story.

I’ve felt like many of the plot threads have been spinning their wheels for a good long while, but “The Door” added some much needed development to these stories and kicked us right in the feels.  My only real issue with the episode is how quickly Sansa and Littlefinger seemed to flit about the North throughout the episode, but I suppose that can even be resolved by simply assuming the stories we’ve been told aren’t being shown to us in a linear narrative and we’re getting tidbits to feed us information in a way that makes sense per character, as opposed to a sequential order within the overall plot.  If you look at it from that perspective, this episode was damn near perfect.  Minus the wart penis.  That was… not so perfect.  But let’s just get past that okay?  I’d rather spend as few words as possible talking about the wart-covered penis. 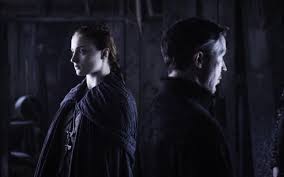 “The Door” starts with Sansa being badass and basically slipping into her role as the rightful heir to Winterfell with ease.  Sure, if we go by the established rules of this universe, her brothers should be the next in line of succession, but one is dead, one is missing, and the other is being held captive by the Boltons, so screw the line of succession.  Sansa is the Queen of the North and I won’t have it any other way.  I’ve been waiting for her to take this position since the Red Wedding.  No seriously, check out this article I wrote three years ago: My Game of Thrones End Game: Badass Women in Charge.  See?  I’ve been hoping this would happen for a long long time. (Not as long as book readers who’ve been with this before the show was created, but I digress.)

Her introductory scene of the episode, despite allowing her and Littlefinger to travel at an illogical speed around the North, gave her a chance to reclaim what happened to her on her wedding night with Ramsay.  I will never be over that scene, so don’t get me wrong here.  I’m not happy that the writers chose to do that to her, but I am happy that she’s talking about it and placing the blame for it at Littlefinger’s feet.  That guy doesn’t deserve half of what he’s gotten and having this incident thrown back in his face was cathartic for me as a viewer.  It should have never happened to Sansa in the first place, especially in the way that it happened, but since it did, at least we got this amazing scene.  I punched my fist in the air with joy that she got at least this.

We jump from one Stark girl to the other who’s still deep in training across the Narrow Sea.  Arya’s plot seemed to have stalled out since she arrived in Braavos, with only the occasional nudge towards some sort of end goal.  “The Door” gave us another push towards that goal by having her given one final chance to prove herself to the Faceless Men.  She’s subjected to a terrible stage play that depicts her father as a buffoon and implies sexual assault happened to her sister (well, it did, but not because of Tyrion), but she deals with this triggering content and commits to the goal.  I honestly don’t know if she’ll be able to successfully assassinate the actress she’s been told is her target, but at least something is happening.  She has one more chance and then it’s over for her, so at least her plot won’t feel stalled out in Braavos for much longer. 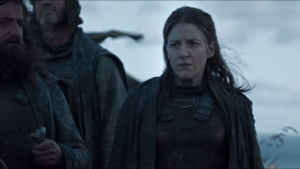 Continuing with our theme of badass women, we also had a lot of movement with the Greyjoy plot.  Theon backs his sister against their uncle Euron Greyjoy, but their dumbass uncle (whom Geekiary admin Tara has aptly compared to Donald Trump) still wins the Kingsmoot.  Being the badass that she is, Yara steals the best ships and heads off to do who knows what.  Whatever she’s going to be doing, it’s going to be far away from Euron Trump-Greyjoy and his overzealous penchant for familicide.  Her and Theon leaving the Iron Islands may also mean that they’ll play a part in the larger ongoing story, which makes me more than happy considering how far removed they’ve been thus far.  Euron implied he was going to sail to Daenerys and marry her in exchange for ships, so maybe Yara is going to try to beat him to the punch.  Minus the marriage part.  Actually… you know what, no.  Let’s keep the marriage part.  Daenerys/Yara is a ship I can get behind (no pun intended).  Dragon Queen/Salt Queen forever.  Get it, Yara.

Speaking of the Dragon Queen, Daenerys’s plot was pretty small in “The Door”, but considering how much time she got last week I’m not too bothered by this.  We basically got Jorah confessing his love for Daenerys, and her tearfully telling him to find a cure for Greyscale and return to her side in Westeros.  I admit it, I got a bit weepy even though I don’t really ship those characters together.  He’s been incredibly loyal and now he’s pretty much doomed to die.  We know there’s a cure out there somewhere, though, because they used it on Shireen Baratheon to stop the spread of the disease.  She still had scars on her face, but she was alive and well until that whole child murder thing happened.  Oh child murder.  You’re so edgy. 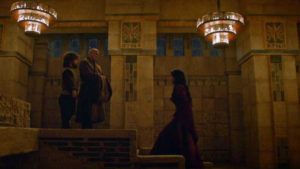 Back in Meereen there’s a second Red Witch who seems to be swearing loyalty to Daenerys and her advisers.  She believes that Daenerys is the Prince that was Promised, whereas Melisandre believes that title belongs to Jon Snow.  My theory that the Prince that was Promised and Azor Ahai are two separate prophecies makes both of them right.  Many people think they are the same person, though, which means they can’t both be the prophesied savior from the darkness.  Melisandre was already horribly wrong once, though.  I don’t think she can take being wrong again before she just snaps and burns everything to the ground.  Let’s throw her a bone on this one, okay?  There can be a Prince that was Promised AND an Azor Ahai.

The biggest and most upsetting plot point of “The Door” was Bran’s.  We lost both Summer and Hodor in one single battle.  I honestly don’t know which is more upsetting.  I have a soft spot for the Direwolves, but I really like Kristian Nairn as an actor, too.  I’ll be sad to see him go.  Both losses are massively upsetting and made  it really hard to write this review with a clear head.  I do wonder if the origin of the name “Hodor” will show up in the books, though.  I never thought the name would have an explanation.  I figured it was just a random string of syllables that he said.  I’m not sure how I feel about him basically being destined to sacrifice himself for Bran, nor am I entirely sure how I feel about Meera being the one to tell him to “hold the door” and then fleeing into the snowstorm with Bran.  I guess they all understand that Bran must be saved, but she basically told him to sacrifice himself and then just ran.  I’m going to have to sleep on that entire sequence before I know how to handle it. 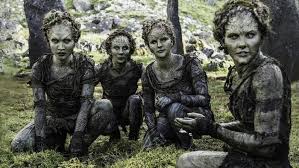 I’m also surprised that we got an origin story for the White Walkers.  I always just assumed they were ancient beings like the Children of the Forest.  But no, they were created by the Children of the Forest to fight humans.  That obviously didn’t work out to well for them since they seem to be warring with them now.  Like the origin to Hodor’s name, I’m curious if this explanation will be in the books as well or if we’ve completely diverged from anything George RR Martin intended by now.  I’ve always been fascinated with the mythology beyond the wall and if they diverge too much from one another I’m not sure how I’ll reconcile the mythology.  It’s George RR Martin’s creation, but I’m getting the origin myth from the show first.  Where will my loyalty be? With the original creator or the one that told it to me first?  Will my other issues with the show make me automatically appreciate the book origins more, or can I actually just enjoy the expansion of the mythology without bias?  So much to think about.

Despite the problems, “The Door” was a solid episode from beginning to end.  I cried.  I shouted at my screen.  I punched my fist in the air in solidarity with all the fierce women who are taking over the plot.  But mostly, I’m finally happy to see the plot go forward and not be stuck waiting for things to happen.  I’m still not sure how the divergence from the book will play out, but considering how far out Winds of Winter probably is, that may not rear its ugly head any time soon.  Maybe I should just sit back and enjoy this for what it is for now.

Previous:‘Bleach’ to Be Released on Blu-ray by Viz Media This Summer
Next: Black Butler Chapter 116 Review: The Butler, Attired