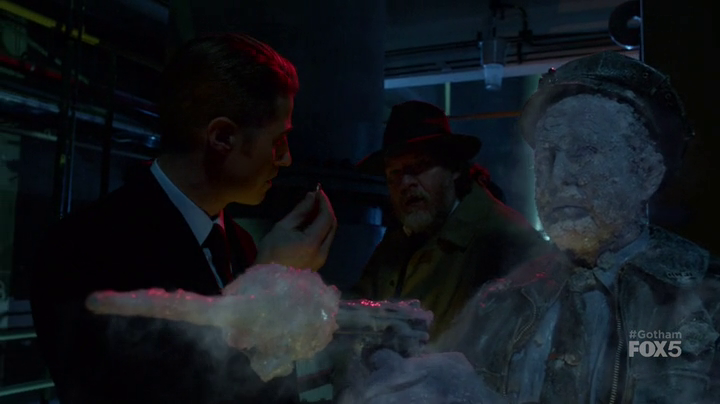 This week’s episode of Gotham brought Mr. Freeze’s current arc to a close only to hint at a new one in ‘A Dead Man Feels No Cold’.

I would’ve preferred ‘A Dead Man Feels No Cold’ to be part of the previous episode as a two-hour mid-season premiere. This would’ve made Mr. Freeze’s story feel more compact.

I don’t know if other viewers are picking up on this but I do feel that the writers of Gotham are trying hard to leave breadcrumbs that’ll lead to Gordon accounting for his actions. I’m all for seeing Gordon trying to justify his past choices but he’s a main character and I know that he’ll come out just fine. That’s why I’m not really worried about him. Even though Dr. Hugo Strange heard Penguin yelling about Gordon being the one who killed Galavan I don’t think it is going to amount to much.

To me the villains make Gotham and that’s why it is far more enjoyable to see their stories rather than Gordon trying to stop them. The writers did an impressive job with Victor Fries’ origin story, and in the end we do get to see him become the Mr. Freeze that’s closer to his comic book counterpart. His love for Nora was what drove the two-part arc, and it was emotional seeing it come to a sad conclusion. I wonder what Mr. Freeze’s new motivation is going to be if he does show up in upcoming episodes.

The Indian Hill storyline is building up into something epic. Almost all of the villains are being experimented on by Dr. Huge Strange. With the way Gotham has treated its villains I want the finale to be mind-blowing. The villains were already over-the-top so, I’m looking forward to what they’re going to become after Dr. Strange is done with them.

We also got to see Barbara Kean in Akrham Asylum. She’s still unconscious, and being one of my favorite characters on the show, I want her to wake up and start wreaking havoc already. The same with Penguin. He’s being tortured at Arkham, and I want him to break out and get his revenge.

Baby Bruce and Kitty Selina interacted this week and it was fun as usual. I need more of them in this show. Baby Bruce hasn’t been doing well after being abducted, and he was quite creepy during his little talk with Dr. Lee. He’s determined to kill Malone, and I liked how Selina tried to talk him out of it. Their interaction felt like a parallel to Nora and Victor’s relationship where she watched her husband turn into someone else. I want Selina to be the one who stops Bruce from doing something that’ll change him forever.

What did you think of Gotham this week? Did ‘A Dead Man Feels No Cold’ prove to be a good origin story for the iconic Mr. Freeze? Let us know!