Guardians of the Galaxy vol 2 delivered on multiple fronts, but especially when developing the themes of found family and the utilization of its female characters.

WARNING: This review will contain spoilers for Guardians of the Galaxy vol 2. 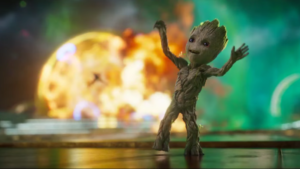 Despite what the four Captain America shirts in my wardrobe would lead you to believe, Guardians of the Galaxy is actually my favorite MCU franchise.  Like the first film, Guardians of the Galaxy vol 2 is also visually stunning and has a kickass soundtrack.  While much of the MCU is restrained by being placed on earth (parts of the Thor series notwithstanding), this series has the freedom to go anywhere it likes stylistically and practically.

But even with the amazing visuals, the focus is always on the characters.  The movie opens with a large battle, but it all happens in the background while Baby Groot dances in the foreground.  This has a comedic effect, but also reminds us what the film is about.  We’re here because of these amazing characters and their unique dynamic.  But if you’re here for the visuals too, they don’t leave you high and dry on that front either.  You can have your FEELS and eye candy too.

One of my favorite themes in any piece of media is the concept of “found family.” Essentially, family is what you make it, not necessarily who you’re related to by blood.  This theme is a major focus of Guardians of the Galaxy vol 2, so it stirred up a lot of emotions for me from beginning to end.  Whereas in the first film the Guardians are mostly strangers united for a common goal, we get to see how their relationships have developed in the interim between films.  Their banter is more refined.  Even Drax, whose humor doesn’t usually land well, cracks jokes which conveys just how far they’ve come together.  While Star Lord’s biological dad comes into the picture in this film, the point is driven home repeatedly that sharing genetics isn’t the most important part of ‘family.’ 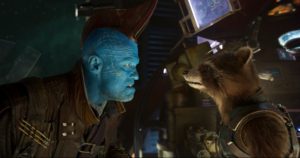 This theme also brought a lot of unexpected Yondu feels into the picture.  He and Rocket develop an understanding of one another when they recognize a similar loneliness within each other.  Likewise, his relationship with Peter Quill is put into a new light when the reasons for the initial kidnapping are revealed.  In addition to Yondu’s relationship with the Guardian’s being strengthened, we see the strength of the bond between Ravagers as well.  Though he was expelled from the Ravagers, they still show up for him in one of the most beautifully stunning and touching scenes in the entirety of the MCU.  While this review does come with a spoiler warning, I can’t even bring myself to talk about that scene yet.  It just hit me in the feels a bit too hard.

While a bit more contentious, the bond between Gamora and Nebula is also explored.  While the first film dubiously passed the Bechdel Test, Guardians of the Galaxy vol 2 hits the mark and exceeds it multiple times.  Their conversations no longer revolve around the male characters in their lives, but just the relationship between each other.  Outside influences ruined their sisterhood, but when stripped down to just the two of them they find a bond.  This is the Nebula and Gamora I wanted to see.  They’re sisters, even though they aren’t even the same species.  They’ve fought each other and harmed each other and hated each other, but dammit they’re family. They’ve been through trauma together and we finally get to see just what that means to them.

While both actresses Karen Gillan and Zoe Saldana are physically beautiful people, I never felt like their sequences relied on the male gaze to elevate them.  We all remember the unfortunate side boob incident in the first installment, but this one generally avoided that.  Even the physical fights between them wasn’t focused on ‘sexy fighting’ but rather supreme badassery.  The moment when Gamora charges towards Nebula with a giant gun could have easily been reduced to close up body shots or gratuitous camera pans, but it didn’t.  They’re in skintight outfits that show off every curve, but I don’t recall any random butt or boob shots throughout the film (though if I missed one, please do remind me!) 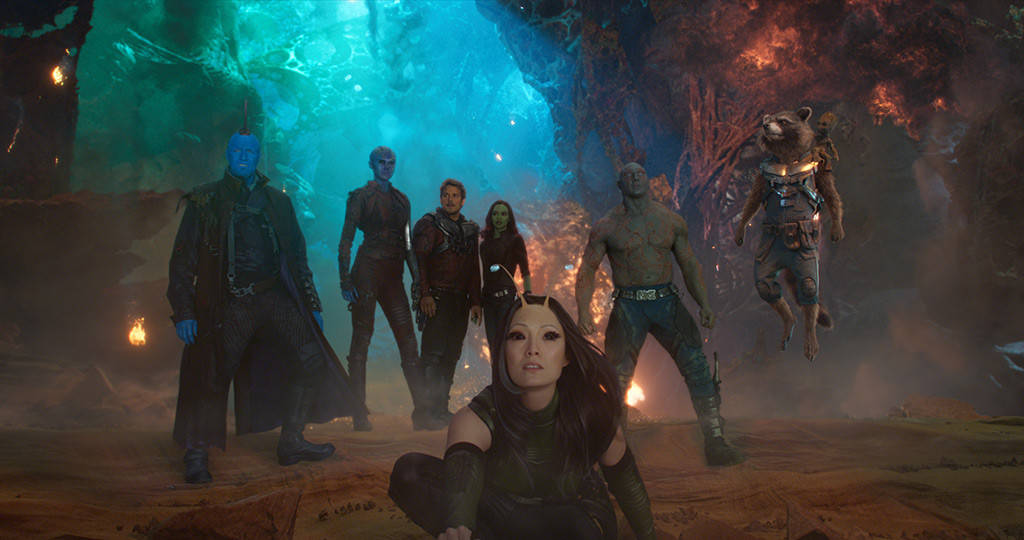 In addition to the women we are familiar with from the first film, we add a third character to the line-up.  Mantis adds more gender balance to the team.  I hope she sticks around, not just because of the additional gender balance but because of her unique bond with Drax.  They play off each other remarkably well.  They’re both awkward and not entirely skilled at socialization, but it works.  She’s welcomed into the Guardians of the Galaxy Ohana.  As Drax says, nobody gets left behind.

Guardians of the Galaxy continues to be my favorite part of the MCU franchise and I can’t wait until they cross paths with our characters here on earth.  Now that our team is more comfortable with one another and has fleshed itself out with additional dynamic people, I’m ready to see them thrown in with another group of superheroes to see how they handle it.  But for now I’ll take these two films and run with them.  They are brilliant and I hope these films continue beyond the scheduled MCU Phase 4 installment.  I just can’t get enough of these characters.

Previous:Wraith Battling “Demon’s Crystals” Launching May 12th on PlayStation 4 and Xbox One