Guardians of the Galaxy: Funny, Beautiful, but Not Without Problems 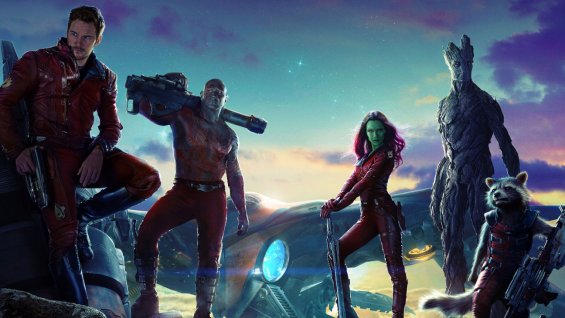 Guardians of the Galaxy lived up to most of the expectations I’d set before going into the film. It was visually gorgeous, had a wonderful balance between humor and action, and had a rocking soundtrack. The characters were also far deeper than I was expecting and I found myself tearing up at their stories multiple times.  The film had much more heart than I was expecting from something many reviewers are touting as a comedy. Unfortunately it didn’t live up to all the expectations I’d set for the women in the film which, let’s be real, I do tend to set rather high.  Despite having several prominent women in the story, their treatment and representation fell short of what I know Marvel is capable of depicting. Overall I enjoyed the film and hope they make another one, but I just wished they’d utilized their women a bit better and steered away from the use of gender slurs for a quick joke.

WARNING: This article contains minor spoilers for the film, but does not include major plot points, character deaths, or full information on the post credits scene.

First of all, let’s get to what I really loved about the film and why I became such a huge Guardians fan in the first place. It’s a story that doesn’t take itself too seriously while still being able to deliver emotional motivations and solid back stories for its plethora of offbeat characters.  It’s a hard balance to strike, but I feel like it succeeded on almost every point.  I laughed.  I cried.  I found myself extremely emotionally invested in the storyline of a tree. 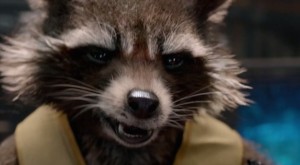 Much of the humor comes from Rocket, whose sarcastic responses to the other characters adds humor to what might have otherwise been an overly dramatic moment.  I was slightly disappointed to not hear “Blam! Murdered you!” but I feel like we got the gist of his character even without that signature line.  Even he wasn’t without his tear jerking moments, though. His pain over his own creation and the stigma that his appearance gives him adds a depth to a character that first appears to be there for comedic relief. His obvious deep affection for Groot also adds to this and, I’m not going to lie, I’m surprised at how invested I’ve become to the relationship between a talking raccoon and a sentient tree.  Like, these two characters are tugging at my heart strings, guys, and I was not expecting this.

Drax is a character whose humor comes from the opposite end of the spectrum from Rocket. It’s his lack of ability to use metaphors or crack jokes that makes us laugh. He’s overly serious in a world that’s populated by characters who understand sarcasm and wit. His backstory is the most emotionally damaging on the surface level and his plot is the most straight forward, but being surrounded by these other characters is what fleshes him out into a character you care about.  His motivations are a little too straight forward to start, but it’s his growth after his initial introduction that makes him a solid character.

Groot is a surprisingly emotional character for what’s essentially a sentient tree that can only speak three words. His aforementioned affection with Rocket and, eventually, the other Guardians leads to some of the most visually beautiful scenes in the entire film.  Sure, the explosions and spaceship battles are awesome, but those little balls of light he releases into the air are absolutely breathtaking.  But it’s not just his friends that he shows this sentimental side to. He creates a flower that he gives to a little girl that they randomly pass by on the street. Yes, a sentient tree has caused me massive feels. It’s brilliant.  He’s a tree for goodness sake.

For the die hard marvel fans there was plenty to get excited about. They kept enough of the characters under wraps for so long that even the reveal of characters that we knew had to appear in the story, such as Thanos, we’re very exciting. But even beyond that there were (comparatively) minor cameos such as Cosmos the Space Dog and Howard the Duck.  While they didn’t have much to contribute to the actual plot, they were fun little inserts that make the comic fans excitedly point at the screen and whisper “I get that reference” to their non-comic book reading friends.  We even catch a glimpse of the Tesseract, proving that this is the same universe as the Avengers, which are my personal favorite touches to these films. 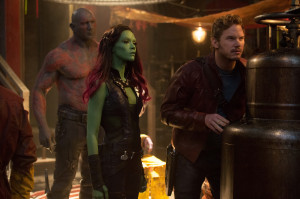 But here’s where I become a bit of a buzzkill. I’d like to remind readers that its possible to enjoy something and still be able to notice its flaws. For Guardians there were a few too many gender slurs used for my liking. I counted at least three, one of which was actually said by one of the female characters to belittle a male. Two of the three I can’t even quote on this website due to our content rules. Thankfully Gamora fought back after being called one of them, which is really the only acceptable way to react to a slur like that.  I’d much rather these words not be used at all, but if they are having the woman that they are directed at get angry at their usage and confront the person who slung it at her helps ease the initial sting.

Sadly the film did not even pass the Bechdel Test, despite having three prominent named female characters who had large parts to play in the narrative.  There were even a few other women who had a scene or two who were given names, but it still didn’t pass what should be a relatively easy test.  Every scene involving Gamora and Nebula, our two women with the most screen time, involved discussing issues with Ronin or Thanos. Indeed, a lot of their issues revolve around these two characters, but that further proves that there are too many stories with a majority of male leads. We need more women in prominent roles in the media in general.  They can’t help the fact that their connection is all about the men in their lives.  It’s just a sign of a problem throughout media that this test was created to highlight.  If only they’d talked about anything else, this film would have passed.

I am, however, pleased that Gamora passed the Mako Mori test. The Mako Mori test is a relatively new feminist media theory that states that in order to pass it must have “a) at least one female character; b) who gets her own narrative arc; c) that is not about supporting a man’s story.”  I’d like to argue that Gamora passes this, though some people may argue on the third point that her arc does eventually support Star-lord.  Gamora is a woman with her own mission whose goals just happen to align with a group of men (and a raccoon and a tree).  When it looked as though her arc was about to tie in romantically with Star-lord, she actively fought against it and continued to fight for her own cause.   By the end of the film she does help Star-lord and become part of his team, but I feel like the end result was still part of her own arc and not at all an effort to support the male protagonist’s story.  I will accept that it’s a bit wobbly on the third point, but I’m sticking to my guns here and want to say that she passes this test.

Nebula, unfortunately, did not pass the Mako Mori test. Her entire plot revolved around either Thanos or Ronin. Even her jealousy over her sister was rooted in the imbalanced love that their father gave them.   I still enjoyed Nebula as a character, but her arc went from supporting one male character (Thanos) to supporting another male character (Ronin) to spite that first male character.  I don’t want to summarily dismiss Nebula, though, because Karen Gillian did a phenomenal job in this role.  I’d like to pour all my love towards Gillian for what she brought to the part.  I just don’t appreciate that everything about her circles around the powerful men in her life.  It’s unfortunate. 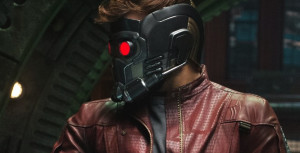 Star-lord’s repeated discussion of his past lovers, the film’s use of the male gaze from his perspective when looking at women, and initial dismissal of the first female character we’re introduced to (a lover he forgot about on board his ship before he went out on a job), did little to endear him to me. It’s unfortunate because I love almost everything else about his character, but he came off as a bit too much of a womanizer for me to really enjoy him completely. He’s funny, determined, and sentimental about a lot of things, but doesn’t seem to think to highly of most of the women that he sleeps with. If he did he wouldn’t forget about them so easily.

The scene where he points out all the scars he’d received from his repeated ill treatment of his partners was supposed to be funny, but it further proved that he doesn’t treat the women in his life well and, worse, makes light of domestic violence.  It wasn’t at all funny and made it even harder for me to love the protagonist of the film.  I really hate even typing that out because Chris Pratt did amazingly well here and I loved everything else about him, but wow, his attitudes towards women needed some major adjusting.

So yes, I have issues regarding the treatment of women in this film, but yes, I still enjoyed the hell out of it. The feminist issues in this film are indicative of industry-wide problems, and not just this one particular story. Indeed, much of the issues are present in the source material as well, so loyalists can always fall back on that argument when defending the film, even if I find that argument to be largely lacking in merit. Many adaptions change things to be more progressive without damaging the integrity of the story (see: Loras and Renly in Game of Thrones), but when an adaption chooses to keep problematic parts, the source material is always held up as a defense. But it is what it is and I’d still see it again, want them to make another, and would highly recommend this film to others. I’d just hope that viewers and the industry start paying attention to these little things and things start to trend better in the future.

TOPICS guardians of the galaxymarvelmovies