I’ve always enjoyed board games, but trivia games have always been my particular cup of tea. Perhaps it’s because I’m an insufferable know-it-all, or perhaps it’s because games of Trivial Pursuit have been a staple in my family since I was a kid. Whatever the reason, when offered the chance to review Half Truth, the new trivia game co-created by Jeopardy! superchamp Ken Jennings and Magic: The Gathering guru Richard Garfield, I leaped at the chance.

I was provided with a free copy of HALF TRUTH in exchange for an honest review. All opinions are my own.

When I received my copy of Half Truth last week, I was faced with a conundrum. How does one play a board game in this new normal in which we find ourselves? While some games have digital versions and are easily played online, a brand-new game won’t have those. And in this time of social distancing, I couldn’t exactly have people over to test it out.

The solution, then, was to play the game over video chat – with modified rules, of course – which my friends and I did last Friday. It actually worked pretty well, and we had a great time. And this week, a very special edition of our Quarantined Feelings… with the Geekiary webcast will feature a group of us playing the game!

The basic premise of the game is this: you are smarter than you think you are. Instead of being expected to come up with one correct answer on the spot, which can often lead to you blanking on the answer even if it’s something you know, Half Truth offers you six options – three of which are right, and three of which are wrong – and you have to pick the correct answer from among them. The idea is that it is much easier to guess the answer when the question is multiple choice.

You would think that, until you’re faced with a category where you don’t recognize any of the options, and you just have to blindly guess. 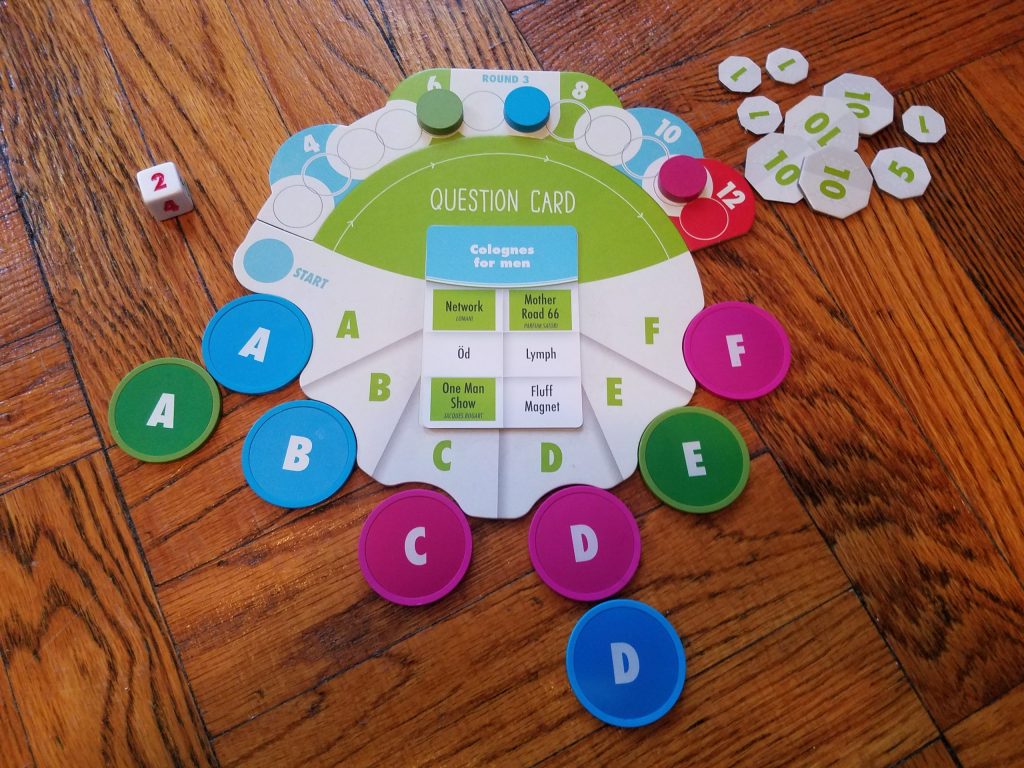 Gameplay is relatively simple. Players select a colored token and are given the matching letters. One player rolls the die, draws a card from the deck, and places it face up on the game board so that the answers match the letters.

Everyone makes their choice(s) by placing the letters face down so that the question mark on the back is showing. There are three correct answers in every category, and you can make up to three guesses – but be smart about it! Only if all of your guesses are correct do you move along the board or score any bonus points.

Once everyone has chosen, players flip over their letters and place them next to the corresponding letter on the board. Then you flip the card over to reveal the correct answers.

As soon as one (or more) players reaches the red space at the end of the board, the round is over. Now is when you tally up the points! When the round ends, you get points based on the location of your token on the board. If you got any bonus points during the round, you add those to your total. There are three rounds – with board points increasing each round – and whoever has the most points at the end of the game wins.

Here is where I have one of my only issues with the game: I’m a little bit confused on the board scoring. Some of the spaces could overlap, and it’s not always clear which number they’re associated with. I suppose it doesn’t matter all that much, but when my friends and I played, the game was decided by one point, so be consistent with whatever you decide.

There were five of us playing (there can be up to six players), and it took us about two hours to play the entire game. Of course, playing it over video chat probably made it last longer than it would if we were all in one room, and at least 20 minutes of that was trying to figure out the rules (until I put the card on the board, I was wondering how you determined which answer was which letter!).

Half Truth is so much fun! I’m a huge fan of trivia games anyway, as I mentioned before, but this isn’t your typical trivia game, even without factoring in the multiple correct answers. The categories are just bonkers. There are over 500 cards with categories ranging from “People Born in the West Indies” to “TV Shows Where the Theme Song Is Sung by at Least One of the Actors”.

I tend to do pretty well in general trivia games, but the categories in this game are just so uniquely specific that I was stumped multiple times and found myself making wild guesses. Even categories that I thought I’d have on lock (like “Dinosaurs”) had me fumbling for an answer.

Some of the categories are just so completely out there that you can’t help but laugh, and some of the answers are ones you would never expect. You’ve got to know when to pick the ridiculous choice and when to go for the obvious one. Half the fun is revealing the answers and finding out which seemingly crazy choice is actually right!

All of my friends had a great time playing the game. We were all basically on even footing, and there was a lot of good-natured teasing (mostly of ourselves) when our guesses turned out to be completely wrong. We laughed pretty much the entire time we were playing.

My recommendation is that if you’re at all a fan of trivia games, you will definitely want to pick up a copy of Half Truth. It’s a blast, and you learn a lot! Once the social distancing guidelines lift and you’re comfortable gathering in groups again, you should celebrate with a rousing round of Half Truth.

Half Truth was initially launched as a Kickstarter campaign back in August 2019. It was fully funded in an unprecedented three hours and is one of the most anticipated trivia games of the year. Created in partnership with Studio71 and Nighthawk Gaming, the game is now available from studio71games.com, as well as major retailers like Target and Amazon, and hobby and specialty shops. It retails for $30

If you’ve got the time, check out our Game Night webcast below:

As an addendum, something that came to light during this webcast that didn’t occur to me when I was playing with my friends is that this is a very US-centric game, so keep that in mind if you’re not in the US.