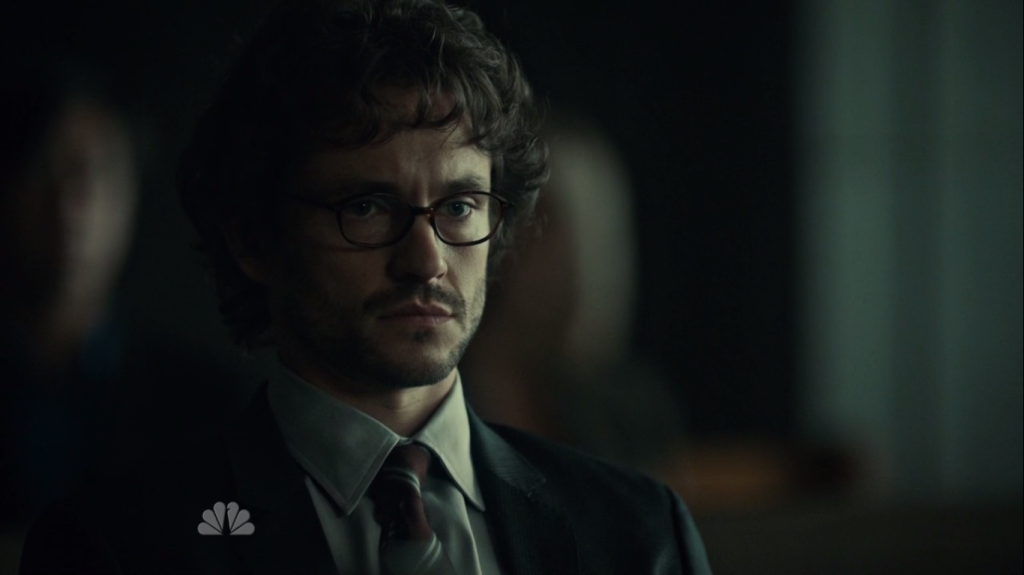 The complexities surrounding the characters on Hannibal is one of my favorite things about the show and this episode highlighted that beautifully.   These characters are incredibly fleshed out and that sometimes makes analyzing their actions difficult at times.  Very rarely is a character acting from a simple and straight forward perspective.  While it makes getting into their headspace difficult, it also adds a richness to the narrative that many shows tend to lack.  The complex characters, strong narrative, and appropriately timed dashes of dark humor are what keeps this show’s fanbase so passionate and devoted.   I hope that the campaigns to keep Hannibal on the air succeed, because it is truly a unique show and it would be greatly missed. 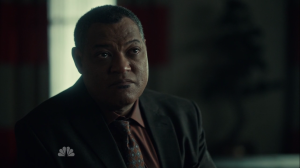 Jack Crawford’s defense of Will came as a surprise to almost everyone, viewers included.  I’ve never had any doubt that Jack appreciated Will’s talents, but he put his own reputation and even his job on the line with his testimony.  He essentially placed the blame on himself, which will help Will’s case in the long run.  I feel like a large portion of this decision is out of genuine guilt over what he feels he did to Will, but a lot of it could be attributed to the inevitable loss of his wife.  She’s approaching her final days and he may be more concerned about spending time with her than continuing his career.  He’s got two extremely emotionally events happening side by side in his life and he’s very obviously conflicted about it all.  Knowing that Hannibal is going to be stabbing him in the neck in just a few short weeks makes this whole thing even more terrible.

Hannibal’s fascination with Will adds another intense layer to the episode and further highlights the character complexities that have become a signature of this show.  Hannibal is the one who framed Will in the first place, but he’s starting to seem worried about Will’s fate.  The murder set up in the episode seemed to be equal parts an attempt to clear Will’s name and an attempt to get Will to trust him again.  Hannibal is a master manipulator though, so his odd obsession with Will, just like Jack’s motives regarding his own testimony at trial, aren’t easy to analyze.  There are multiple valid interpretations of his actions and it’d be unfair to dismiss an alternative interpretation when the character in question is a highly intelligent serial killer. 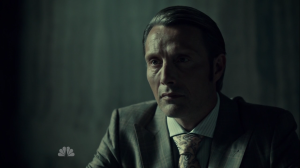 Mads Mikkelsen has been playing these scenes as a genuine show of concern, but with Hannibal’s history of manipulation it can just as easily be attributed to him wanting to save his own reputation in Will’s eyes.  Whether we’ll ever truly know how he feels remains to be seen and at this point I think that both interpretations of his motives are absolutely valid.  I choose to interpret his feelings about Will as genuine, albeit manifested in the only way that a cannibalistic serial killer knows how.  He put his own freedom on the line when he could have just as easily let Will take the blame.  Whether he wants to clear Will’s name or just make Will trust him again indicates that he cares about Will on some level.  I feel like the directing choices support that interpretation.  Hannibal has sat alone looking forlornly at the empty chair across from him several times now.  There’s nobody around in those scenes for Hannibal to be manipulating.  The only people who are watching those moments are the viewers. 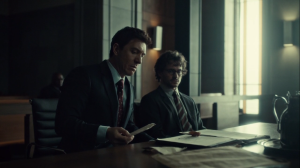 Beyond the character complexities, this episode also features the trademark dark humor that has fostered such an intense fanbase over the past year.  The courtroom scene with the severed ear is a wonderful highlight of the dark humor that attracted me to this show in the first place and has kept many fans engaged even while the show has been on hiatus (or “he-ate-us” as fans have dubbed it).  You’d expect the lawyer to have gasped, maybe screamed, or at the very least recoiled in horror when the ear fell out of the envelope.  Instead of a dramatic reaction he simply looked at the body part and told Will “I think I opened your mail.”  The episode then immediately launches into it’s haunting opening title sequence, which was a perfect transition and a wonderful way to set the tone.  Small details like this are why this show deserves to stay on the air for many seasons to come.  It’s clever.  It’s funny.  It’s unique.  I hope it sticks around.

Looking forward I really don’t know how the murder set up is going to affect Will’s trial.  It is truly an unpredictable turn of events and I’m not exactly sure what to expect next week.  Beverley Katz continues to be my prediction as the first person to suspect Hannibal’s guilt besides Will, but beyond that I don’t have very many predictions for the future.  To be honest the lack of predictability has me even more excited.  Very few shows can genuinely surprise me in such a way and I’m incredibly excited to tune in every week.