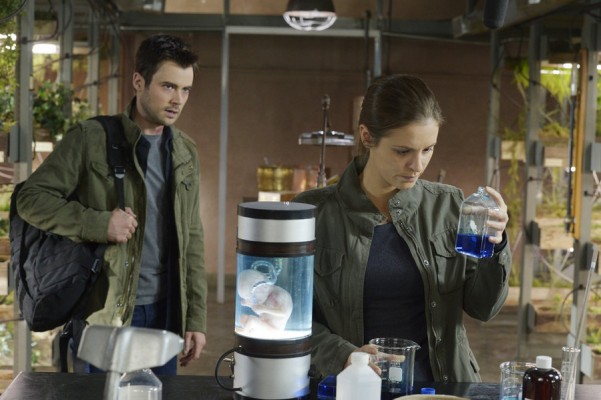 This week’s episode of Helix had me reeling. It definitely felt like a climax to the season, and since next week is the season finale, of course a lot happened, including a super intense cliffhanger. New alliances were formed, and lots of characters showed their true colors. But, as has been the case the past few episodes, we continued down a very dark and very disturbing path.

The episode opened with Anne and Peter chopping up bodies from the massacre they started last episode. As if that weren’t gruesome enough, it had to be juxtaposed with the two of them consummating their bizarre romance in the shower. These two are definitely made for each other. We find out that Peter is the “ascendant”, in that he is the new leader of the abbey and now goes by Eli. Yes, biza 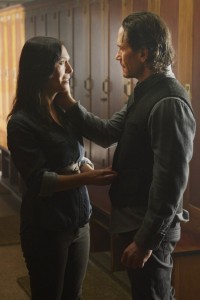 rre. So now Eli has his own little family with Anne and the birthing chamber baby (who is still unnamed–bets on Caleb?) in charge of the abbey. I really don’t find this dark turn particularly entertaining or necessary to the plot; I just want Peter to return to being the vector king!

Julia’s response to finding out that Peter is now Eli and in charge was….priceless. It was just hysterical laughter. Which is really funny, because if anyone knows Peter’s true nature, it’s Julia. Laughing aside, Julia still had her mission to complete, and since the Mother root died in the poison gas, her attention was turned to finding any remnant of Mother. She and Sarah successfully worked together a bit this episode before Julia went off on her own for answers.

Kyle continues to be my favorite character on the show by having the best reactions possible to anything crazy that he encounters. He saw the Forever Fetus (the name that I am dubbing Sarah’s jar baby), and barely batted an eye other than to ask Sarah when she was pregnant. Sweet Kyle knows nothing of this strange Helix world. He did show some amazing character, though, after Soren unintentionally saw his mother get killed by Peter/Eli. It was an absolutely heartbreaking scene, but reminded me why I like this show. I really hope that Matt Long decides to come back next season–if there is one! He is the best.

About that cliffhanger: we actually got to see a reunion between Julia and Alan this week! They did have a bit of a heart-to-heart, but it was mostly Julia accusing Alan of being a (rightful) conspiracy theorist, and Alan wanting to eliminate Ilaria (read: Julia). The episode ended just as the two of them had guns pointing at each other, with a fade-to-black then a gunshot. Of course. Because how else would this show end an episode?

I cannot believe that the season finale is next week already. Although “The Ascendant” had a very steady pace, we did not really move forward with questions getting answered. The writers have a lot of loose ends to tie up for the finale, but let’s all keep our fingers crossed that Syfy renews Helix because there is no other show like it on television. Are there any story lines that you are dying to have resolved? Let us know in the comments!

Previous:Naruto Shippuden 18×406 Review: The Place Where I Belong