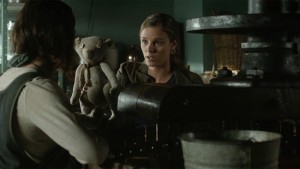 “Flight of the Bumblebee” was not only featured music in the latest episode of Helix, but bees in general played a prominent role in “Densho.” We finally got some answers about the mystery illness (along with a possible cause), saw even more familiar faces, and ended with the unknown fate of three of our favorite immortals. There was also a lot of WTF? In fact, you can follow the fun hash tag #WhatTheHelix on Twitter.

Peter became increasingly shady from seemingly knowing more than he lets on. The big reveal of the episode comes when Peter calls a mystery person on the satellite phone, and it turns out to be Sergio Balleseros – working for Ilaria! We finally get to see Sergio, and I am so excited. He adds another piece to the puzzle of unknowns, which includes what Ilaria knows about Mycoctic, the name given to the new illness by the CDC team. 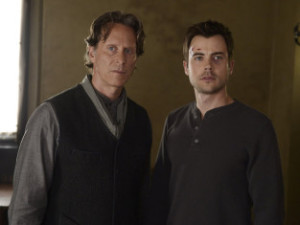 , Sarah and Kyle went separate ways in the investigation this week. While wandering around the orchard, Kyle comes across what may be the source of the illness: bees swarming around a reserve of honey on the walls of the abbey. After some testing, he discovers that the bees are not carriers, but the honey is the source of the illness. Answers, finally! Sarah’s investigation centered around what happened to Soren, and when she confronts his mother about where he might be, his mother pushes back that he is on his own path. Not satisfied with the answer, Sarah pushes harder, and Soren’s mother stabs her in the abdomen, leaving her to bleed out on the floor. While I enjoy having some answers about the illness, why is Soren’s mother so freaked out by Sarah? I am also curious about why everyone in the abbey talks about their “path.” I hope we get more information about this in the coming episodes.

In the future, Julia and Hiroshi had some uncomfortable moments. After continuing to play house, Hiroshi goes on a hallucinogenic fishing trip with Daniel, complete with the Andy Griffith Show theme song in the background. Did I mention that this show is crazy? But Meegwun Fairbrother as Daniel is so adorable, that I just cannot ge 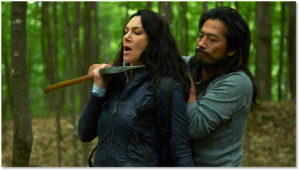 t enough of him, and look forward to Hiroshi’s hallucinations. Upon returning, Hiroshi injects Julia with a mysterious milky substance for her “therapy.” She does not appear to have any immediate adverse reaction, so I am unsure (again) what the endgame is here. After a struggle, Julia frees herself and runs off with an axe. Hiroshi follows her with a sword, and an epic fight ensues between the two of them. More crazy: Hiroshi and Julia basically have the same hair and outfit, so to the untrained eye, it looks like they are fighting themselves. In the end, after sustaining some very serious wounds herself, Julia guts Hiroshi with the axe. As he sits dying, he bequeaths the sword to Julia, and explains that the symbols on it mean densho. She wanders off, and quickly collapses on the ground.

There was so much crazy for one episode. I was so excited to see Sergio, Jaye, and Daniel, but what will happen to Sarah, Julia, and Hiroshi? What is the fate of Sarah’s pregnancy? Who is this Mother that Michael briefly references in his conversation with the women? Was Hiroshi trying to treat Julia for whatever she is dying of, and what does densho have to do with the story as a whole? If you have any theories, please share them in the comments!

One thought on “Helix 2×4 Review: Densho”