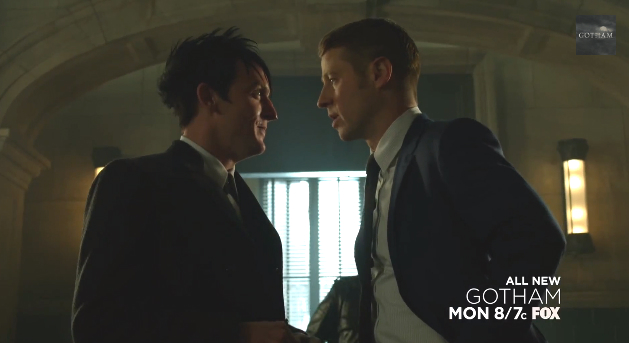 Wow, Gotham, you finally did it. You finally produced an episode that I thoroughly enjoyed and which kept my interest throughout all of the subplots. I’m proud of you. And the Batman fan in me could weep with joy over the fact that finally, the show that had given me such high hopes over the summer, has been able to imbue itself with the look and feel of the Batman mythos without overlooking its current plotline.

I doubt that “The Scarecrow” is the best episode so far but it is certainly one of my favorites. Continuing off the storyline started last week, this episode focused on Bullock and Gordon’s investigation of and 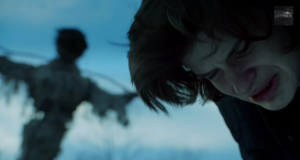 eventual confrontation with Gerald Crane, a biology teacher obsessed with eradicating fear. His son, Jonathan, becomes a guinea pig in Crane’s experiments in the abandoned house they have escaped to which, of course, is overlooked by a ratty scarecrow.

Gerald Crane may be my favorite villain-of-the-week Gotham has offered so far. The fact that the writers chose to start the future Scarecrow’s introduction with a look at his father was enriching and added more depth to a character that could’ve simply been another angsty teenager. Instead, we see the first stepping stones put into place for Jonathan’s eventual transformation into Scarecrow and I love it. There’s a sense of true psychosis here and not just, oh, he’s a crazy comic book villain. It feels a bit more realistic and I dug it.

Penguin is still up to his antics with playing gangsters off against one another but now he seems to be a bit more aware of just how in over his head he can be. His twitchy nervousness is palpable to both the viewers and the other characters and it’ll be interesting to see how he manages to slowly climb his way up towards a position of power. I particularly loved the moment in “The Scarecrow” where Penguin and Edward crossed paths and these two future super villains confronedt each other in a tensely mocking standoff. It was funny but also a bit nervewracking.

The low points of the episode included Bruce being his sulky self though he was saved, in more ways 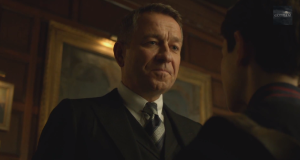 than one, by father-figure!Alfred, which I love. I have an enormous soft spot for the Alfred and Bruce relationship so seeing the two taking care of one another is heartwarming. Also, Alfred kicks ass. He just does and he always will.

I’m also not sure about the romantic relationship between Gordon and Leslie though seeing Gordon frustrated by the complicated minutiae of dating amused me. I just don’t really buy these two together and I’m waiting for the other shoe to drop with this relationship. Until then, I’m just sort of indifferent. Though I am excited about next week’s episode as Leslie has tickets to the circus. And you know what the circus means in Gotham City, right?

Speaking of next week, the promo for the upcoming episode rather hamfistedly hinted at the appearance of baby!Joker which… come on. That can’t be happening, right? While I have no problem with hinting that a character exists within Gotham that’ll someday become the Joker, I am not for tween ginger Joker running around. It just seems too ridiculous and if the writers and producers want to sustain our interest, they’ll hold off on introducing the world’s greatest comic book villain a bit longer.

So what did you think of this week’s episode of Gotham? What do you think Leslie is up to? Will we see the Flying Graysons?

Previous:Tart #4 Review: Submerged Part 1
Next: Context Matters: Why ‘Fifty Shades of Grey’ Makes It Hard To Be a Fangirl